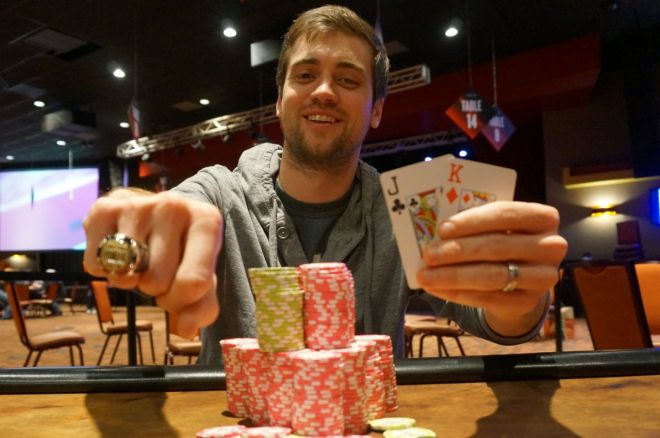 The 12th stop on the 2013/2014 World Series of Poker Circuit schedule wrapped up its $1,675 Main Event on Monday night at Choctaw Casino in Durant, OK.

The tournament attracted a massive 1,428 entries and created a prize pool of $2,142,000. After three days of play, Tyler Morris walked away with the $369,503 first-place prize and a seat into the 2014 National Championship.

According to the PokerNews Odds Calculator, Walker had a 56.68% chance of surviving the hand while Gibralter would come from behind 42.93% of the time. The

flop gave Gibralter a king, and that made him a 74.04% favorite, which meant Walker would need either a ten or queen to stay alive — something that would happen 25.96% of the time. Unfortunately for her, neither card would appear and she would have to settle for ninth place and $36,650.

Big slick would prevail once again as the board ran out

, Walters led out for 2 million and Morris moved all in. Walter, who had just 2.1 million behind, wasted little time in calling off.

Morris was ahead with top pair, and it held as the

blanked on the turn followed by the

on the river. Walters made his way to the payout desk in third place to collect $167,954, which left Morris and Penka to do battle in heads-up play.

turn took away any chance of that happening, and after the meaningless

Morris claimed the title in one of the WSOP Circuit’s largest Main Events in history, which was accompanied by the $369,503 first-place prize and a seat into the 2014 National Championship later this year.

The 2013/2014 WSOP Circuit continues at Harrah’s Tunica from Jan. 23 – Feb. 3. Of course, you will be able to find a recap from that Main Event upon its completion right here on PokerNews.com

*Photos courtesy of the WSOP.