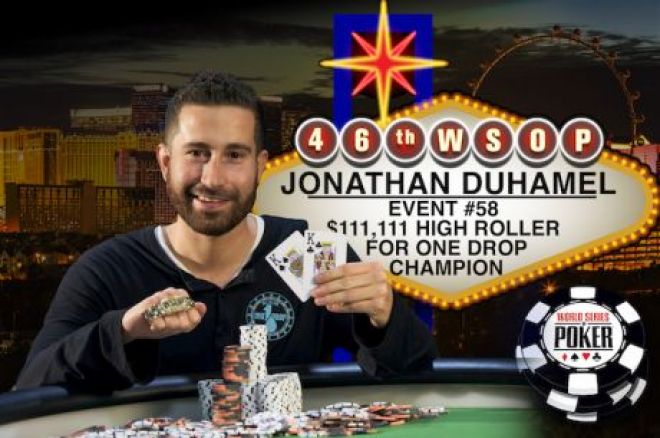 In the end, 2010 WSOP Main Event champ and longtime ONE DROP supporter Jonathan Duhamel topped the elite field to capture his second gold bracelet and the accompanying $3,989,985 first-place prize.

"I feel so amazing right now," Duhamel said after his win. "It doesn't get any better than that. The biggest buy-in of the whole summer, for charity also, all those things combined it's an amazing day. It's probably my second-best day ever after winning the Main Event. It's so amazing, I feel so blessed, I feel so happy, so lucky to be where I am right now"

Among those to fall early on Day 2 were Jason Koon, Paul Volpe, Sorel Mizzi, Ben Tollerene, Erik Seidel, and the money bubble boy, Justin Bonomo. According to updates from the event, Bonomo fell after his

failed to get there against Daniel Colman's

Falling from the final table first was Sergey Lebedev. He got his short stack into the middle with ace-queen against Bill Klein's ace-king. Though Lebedev hit a queen on the flop, Klein turned Broadway and held up through the river to send the Russian out in eighth place. Anthony Zinno fell shortly thereafter when his ace-king fell to Duhamel's ace-queen. A queen on the flop ended Zinno's run in seventh place.

Though he began the unofficial final table of nine with the chip lead, Phil Hellmuth busted in sixth place. A series of unfortunate hands led to a short-stacked Hellmuth getting his last few big blinds into the pot with ace-four, but he could not improve against Dan Perper's pocket kings. That hand failed to help Perper too much as he exited in fifth place when his king-ten failed to get there against Colman's ace-ten.

Ben Sulsky finished fourth after his

was no match for Colman's

when the latter flopped a flush. Despite holding the chip lead at this time, the reigning Big One for ONE DROP champion couldn't capture his second ONE DROP title. He made his last stand with king-jack only to run into Klein's pocket aces; however, in the middle of the hand a medical emergency befell a spectator in the crowd.

Given the seriousness of the situation, play was halted mid-hand, and all other tournaments soon followed suit. To say it was a somber situation would be an understatement.

"It's so unfortunate, and I hope this guy is alright," Duhamel explained. "I give all my prayers and all my thoughts to him. I really wish he'll be ok. The whole room didn't know what to think or what to do in that situation. It was really sad. We all wish he'd be all right. When you put things in perspective, [the tournament] was not that important in the end compared to what happened over there."

After paramedics had rushed the man to the hospital, play resumed and Colman soon found himself on the rail.

The heads-up duel between Duhamel and Klein began with Duhamel holding a 1.3:1 chip lead and ended just 22 hands later. Klein made his last stand with king-jack, but saw his tournament come to an end when he ran into the 2010 WSOP Main Event champion's pocket kings.

"Bill was playing pretty tough," said after the win. "I didn't think he'd play that tough to be honest. He had some moves here and there, and it was tough to play against him. I give a lot of credit to the two guys [during three-handed play. I think it was anyone's game at that point, we were all equal in chips. I feel even more blessed because of that."

In regards to Klein, a successful businessman, he donated all his $2,465,522 in prize money to the ONE DROP charity. A supreme gesture indeed.

Duhamel went on to add: "I've been one of the many spokespersons for ONE DROP for many years now. I know [founder] Guy Laliberté personally; he's such a great guy. He's really into it too, he really believes in this charity. They really do some good things. It's something to win a poker tournament, but knowing it's going to help save so many lives, it's even better. It's like a double win tonight.

Congratulations to Jonathan Duhamel, the 2015 WSOP $111,111 High Roller for ONE DROP champion!