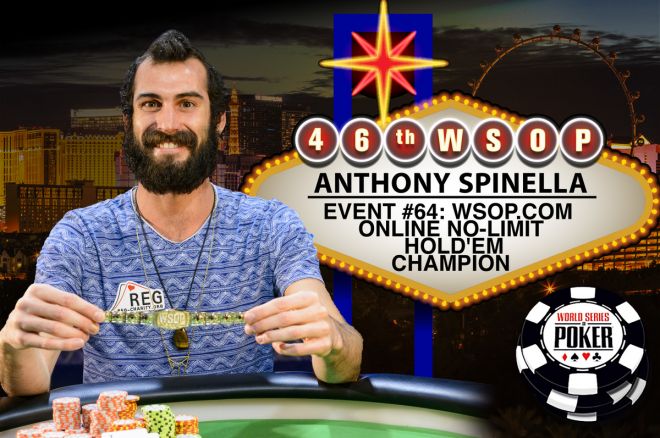 In fitting fashion, former online tournament star Anthony “casedismised” Spinella won Event #64: $1,000 WSOP.com Online No-Limit Hold'em for $197,743 and his first bracelet. Spinella had a decent live résumé with more than $650,000 in cashes coming into the tournament, but he was perhaps best known for banking more than $4.5 million online under the moniker “holdplz.”

The inaugural online bracelet event began on July 2 on WSOP.com and played down to the final six runners, who gathered at the Rio for a traditional live final table to cap off the event. It drew 905 players total, but Spinella nearly wasn't one of them.

“I knew it was going on and I woke up an hour after it started,” he said. “I talked to a friend who said the tournament was going great, it was soft. So, I went to 7-11 and put money on WSOP.com. Seven hours later, I was waiting for the final table.”

That final table convened at noon and was over in just a few hours as the speedy structure and shallow stacks – levels were only 40 minutes and the average stack was less than 25 big blinds – encourage players to mix it up. Spinella's online background means he's comfortable operating at such stack depths and was ready to make the proper adjustments.

. Tuthill switched from competitor to fan and was among those congratulating Spinella after his win.

Hunter “GringoLoco72” Cichy got the next two knockouts, sending Andrew “SLOPHOUSE” Rose packing in fourth and then Craig “Imgrinding” Varnell out in third, but he still entered heads-up play at a 3.5-1 deficit against Spinella. Twenty hands later, Spinella wrapped up the 82-hand final table when he jammed the

and got there against

In a way, Spinella's bracelet coming in the online event means his poker career has come full circle. As a top online tournament grinder, Black Friday changed his life in a big way. He called finding a place to live outside the states “chaotic and difficult” but has now settled in Playa del Carmen, Mexico for the time being, where he lives from September through February, when he's not following the World Poker Tour.

Spinella said he prefers to play live and was happy to get the chance to book his win at the featured table at the Rio, supported by friends and family.

“It's obviously way more exciting to play and finish live,” he said. “I wanted my first bracelet to be a live event, but I'll take what I can get.”