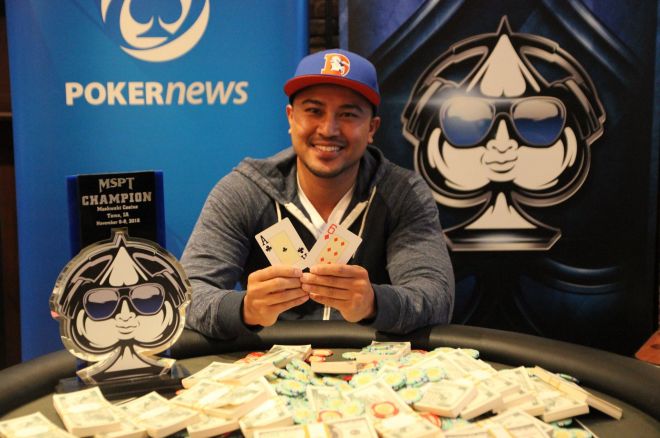 The Mid-States Poker Tour Golden Gates Casino attracted a record 510 entries to Black Hawk, Colorado to compete for their share of a $494,700 prize pool. On Sunday, the final 87 players returned to the famed poker parlor to battle down to a winner. After 13 hours of play, Phanora Prom emerged as the last man standing to collect the $123,180 first-place prize.

Prom, who hails from nearby Denver, had $75,744 in live tournament earnings before the win, which included a ninth-place finish in the MSPT's visit to Black Hawk back in March 2014.

When the day began, 33 players needed to hit the rail to make the money. Among those to leave empty handed were MSPT Grand Falls champ Alan Curl, Kevin "1sickdisease" Eyster, World Poker Tour One to Watch Jose Serratos, Colorado poker pro Bryan Devonshire, MSPT Team Pro Nick Pupillo, and defending champ Kane Lai, who began the day with a ton of chips but ultimately picked the wrong spot to shove.

With 55 players remaining, David Gutfreund opened for 23,000 from early position and Igor Balaban three-bet to 40,000. When action reached Ben Marsh on the button, he four-bet jammed for 141,000, and Gutfreund shoved all in over the top, which inspired Balaban to fold.

Marsh was in big trouble, and it got even worse when Gutfreund flopped a full house on the

on the turn meant Marsh could chop if the fourth lady appeared on the river, but it wasn't in the cards. Marsh exited as the bubble boy in 55th place, ensuring the remaining players a minimum $1,979 payday.

When the final table of 10 was reached, Don Angstead led the pack, but with the blinds so high it was really anyone's game. The short-stacked George Clark was the first to go after running

into Michael Sanders' pocket queens, and then Corey Zedo exited in ninth place after losing a race to Ben Keeline.

Day 1a chip leader Ross Reichart was the next to go after running pocket jacks into the queens of Prom, and then Dave Kohnke saw his

go down in flames to the

From there, Sanders was crippled after running king-jack into the pocket aces of Prom, and then busted a hand later to Thomas. One hand after that, Keeline shoved with the

Prom then eliminated Angstead in fourth place – the former's

holding against the latter's

in a blind-versus-blind battle – and took a big chip lead into three-handed play.

Prom then eliminated Thomas in third place after turning trips, and finished off Sammy Aweida in just two hands of heads-up play. In the first hand, Prom shoved the button and Aweida folded. in the second hand, Aweida shoved and Prom called.

Aweida held the better kicker with his ace, so he was primed to double in those instances there wasn't a chop or Prom got lucky. However, Prom spiked two pair on the

flop, and neither the

The MSPT will now head to Ho-Chunk Gaming Wisconsin Dells in Baraboo, Wisconsin for the penultimate stop of Season 6. That $1,100 Main Event will kick off Friday, and you can find out all the details here.