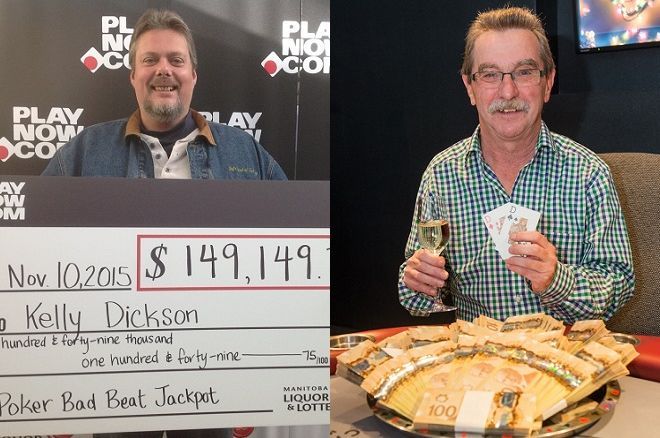 The Canadian Poker Network has awarded its largest bad beat jackpot since 2011. On the afternoon of Nov. 10, 2015, nearly $600,000 was paid out to a $0.50/$1 table with Quebec’s Gontran Larose collecting the largest portion for losing with quad queens to Kelly Dickson's quad kings.

Serving PlayNow B.C., PlayNow Manitoba, and Espacejeux in Quebec, the Canadian Poker Network shares players on Canada’s only provincially licensed online poker sites. Some of their cash-game tables are eligible for the ever-growing bad beat jackpot, and that was where Gontran Larose earned $298,299.50.

“It’s time to retire!” Larose told Espacejeux when he collected his cheque after losing with four queens to a better four-of-a-kind. The bad luck was rewarded as the bad beat jackpot was triggered and he won the biggest portion of the $596,598.99 in the jackpot.

and Gontran “gl” Larose pushed all in with

, getting a fast call from Dickson. Dickson’s kings were already a huge favourite preflop, but when two more kings hit the flop, it was a lock. When the turn and river both brought queens, they gave Larose quads as well, setting off the bad beat jackpot.

“It happened so fast. When I called and the hand was done and his cards were mucked and the small pot was pushed to me and then a split second after fireworks went off, I didn’t even realize what had happened,” Dickson said to PlayNow Manitoba after his big win. “All of a sudden there was $600,000 in chips on the table and it got split up with almost $150,000 going to me.”

Dickson picked up his cheque from Manitoba Liquor & Lotteries on November 13 which happened to be Friday the 13th as well as his birthday. He wasn’t sure yet what he’d be doing with the money, but he’s sure to have a good birthday.