Maria Ho Close Again, But "Nothing Deserved" in Poker 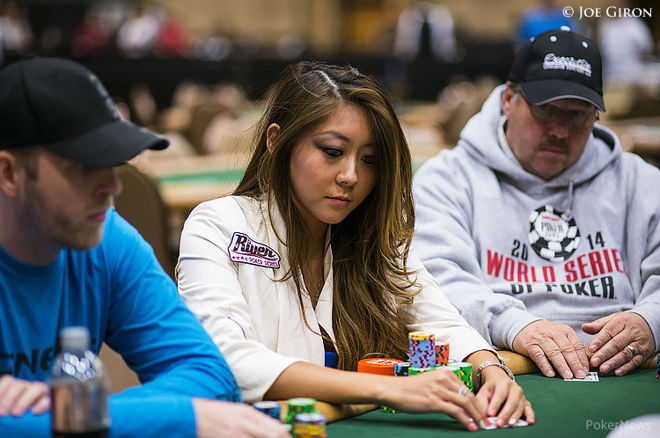 When glancing over the lineup for the final table of Event #42: $3,000 Shootout No-Limit Hold'em, one story stuck out: would Stephen Chidwick finally win his long-awaited bracelet at the World Series of Poker?

However, there was another player at the final table who can almost match Chidwick's résumé of WSOP accomplishments in terms of cashes and monies won, but has also yet to grasp WSOP gold. Like Chidwick, who finished 10th in the shootout, Maria Ho fell short once again, busting in fourth for $87,487.

Despite another close call, the ever-cheery Ho wasn't wallowing in any self-pity. Far from it, she displayed her trademark smile in doing a quick video shoutout for a different media outlet before agreeing to a quick interview with PokerNews.

"I'm just glad to be back at a final table at the World Series again," she said. "But also, you always have high hopes that it's gonna be the one."

Because of the shootout format, in which players compete at one-table sit-n-goes until a winner is determined, all of the players at the final table began with essentially the same stack. On the one hand, Ho said it's nice to begin with a level playing field.

On the other hand, the requirement of getting through some extended stretches of short-handed play, particularly with 10 four-handed tables playing out on Day 2, means the cream typically rises to the top and the final tables are often very tough.

That was certainly the case in this tournament. Pros Phillip McAllister and Kyle Montgomery battled heads up for the bracelet, and Ho managed to ladder past names like Chidwick, Faraz Jaka, Rhys Jones, and Jesse Yaginuma despite being below the final table starting stack for seemingly the entire time.

"I definitely think I maximized where I could have gotten," she said of her finish. "I have no regrets about the first couple of hands I played that got me to the short stack."

"In a $3K shootout, you're going to get the elite players in the end because it goes from full-ring to four-max, and they have to play two heads-up matches to get here, so they're going to be good," she said. "Given the fact that I was the shortest stack with 10 players left, I'm really happy to end up fourth."

The early setbacks, she felt, came in standard spots and she walked away happy with how she played, ostensibly at peace with another near-miss in a WSOP career that has spanned a few of them. With the score, Ho now has about $1.2 million across 36 cashes at the WSOP. She has twice been the last woman remaining in the WSOP Main Event with a pair of top-100 finishes — 38th in 2007 and 77th in 2014.

Year after year, she continues to show up at the WSOP and put in the time at the tables, taking the grind for what it is, a constant battles against both opponents and variance. She comes with the attitude that nobody is entitled to success and wouldn't bite on the question of whether she is one of the best players without a bracelet.

"Honestly, I don't think there's anything that's deserved in poker," Ho said. "I feel like there's so many good poker players that don't have a bracelet. So, I would never be the person to say I deserve a bracelet or I'm one of the best without a bracelet."

Though she admitted it's a bit frustrating to run deep again and come away without the bracelet, she's taking something positive from the fourth-place finish, knowing she's good enough to win one and has more opportunities ahead.

As the 2016 WSOP rolls on, be sure to stay tuned to PokerNews for continued coverage, brought to you by our sponsors, 888poker, including weekly 888 Hand of the Week articles.