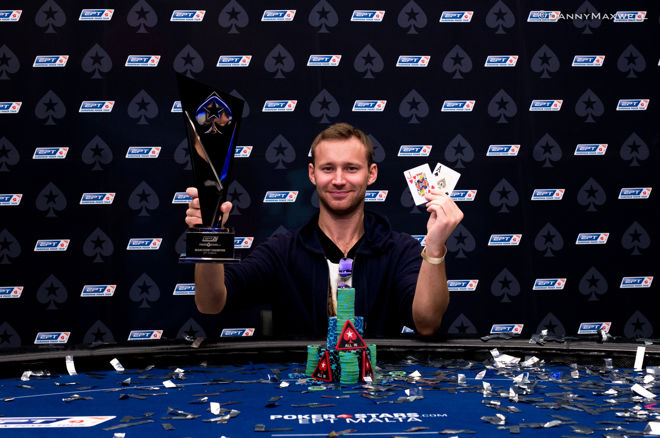 Aliaksei Boika is the winner of the 2016 PokerStars.com EPT Malta Main Event. After six long days of poker in Casino Portomaso, the 28-year-old Belarusian poker pro bested long-time tournament chip leader Mats Karlsson heads up, making one of the best calls in EPT history to win it all.

The sixth and final day started with just six of the 468 runners remaining. Aliaksei Boika started the final table as the short stack but quickly moved up the pack by winning an all in with pocket jacks versus Tomas Macnamara's ace-king. Macnamara flopped a king but Boika rivered a straight to keep him in the tournament.

Tomas Macnamara was the first to go, finishing in sixth place for €76,790. Macnamara shoved all in three times in a row after having doubled Boika. The first two shoves went unanswered, Peter Ockenden called with sixes the third time and Macnamara failed to catch up with ace-eight.

Despite busting Macnamara, Peter Ockenden would be the next to go. Ockenden, who resides in both England and the Netherlands, was sent to the rail when he got it all in with ace-nine against the jack-ten of Karlsson on a nine-high flop. The Swede paired his ten on the turn to send Ockenden packing in fifth place, good for €104,340 - by far the biggest score of his career. It's an incredible payday for the online qualifier, who qualified online at PokerStars.com for only €27.

Elie Saad finished fourth, cashing €141,780. The 41-year-old businessman from Lebanon couldn't get anything going at the final table and quickly fell down to a short stack. Holding king-jack, he moved all in versus Boika's pocket tens. A king on the flop gave Saad a huge lead, but the ten on the river ended his EPT Malta Main Event run in fourth place.

Russia's Dmitry Yurasov finished in third place. Yurasov, who was a constant presence at the top of the leaderboard throughout the tournament, started the final table second in chips. He didn't gain much traction on Day 6 but still reached the final three with relative ease. Three-handed, the experienced and feared online player shoved ace-king into Karlsson's king-queen, but a queen on the turn sent him to the rail. The high roller, who qualified on PokerStars under his moniker "yurasov1990," noted the third six-figure score of his career, banking €192,650.

The heads-up started off really deep but turned out to be a one-sided affair. Mats Karlsson started out with eight million to Boika's six million in chips but it would be the latter dragging in the vast majority of pots. In just one level of 90 minutes, Boika managed to work down Karlsson's massive stack of 100 big blinds to zero, ending it with an amazing call to win the tournament. On a queen-eight-deuce-king-seven board, Boika held just ace-jack high and was facing an all-in shove from Karlsson. After spending five minutes in the tank, the Belarusian made an incredible call. Karlsson held just ace-four high and graciously admitted defeat. With that, Karlsson of Sweden finished runner-up while Boika secured victory in the penultimate EPT, boosting his bankroll with a massive €355,700 out of the €2,269,800 prize pool.

That's it from EPT Malta, the second-to-last EPT is on the books. The European Poker Tour will be back early in December for the final stop in Prague, before transitioning into the PokerStars Championships and PokerStars Festivals.