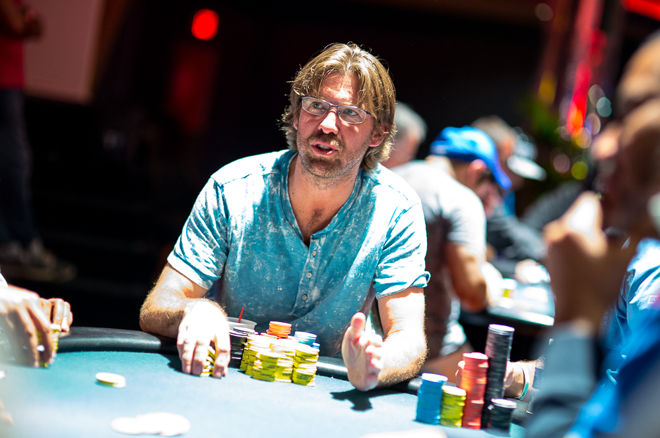 The third ring event of the 2016 World Series of Poker Caribbean festival at the Casino Royale saw 109 players take to the tables and an additional 27 re-entries boosted the field to 136 entries in total. A prize pool of $40,800 was created and the top 15 spots will be paid a minimum of $690, whereas the winner takes home the elusive WSOP Circuit ring as well as $11,400 in cash.

After 15 levels of 30 minutes each, the field of hopefuls was whittled down to just 29 and Layne Flack claimed the lead with massive 363,500. Willie Janssen, who finished third in the $365 Six-Handed Event #10 earlier in the day, followed with 237,000. Local player Marvin Browne came in 11th in the $365 NLHE Event #3 and is looking for another deep run by claiming the third spot on the overnight podium with 204,000.

After level six, Ryan Martin was boasting massive 250,000 chips, but the player from Trinidad & Tobago ran badly in the last few levels and made it through with just 50,000. On his last table, Martin witnessed the run good of Flack, who busted two players and then sent Ricardo Benjamin to the rail in spectacular fashion. Perez had just lost a bigger pot and three-bet to 10 big blinds; Flack four-bet shoved the six-three suited and was called by pocket jacks to find a runner runner straight.

Ramses Bislick flopped top pair and turned a gutshot when he shoved into Marvin Browne only to find himself drawing dead against the ten-deuce suited of Browne for the flopped flush. In the penultimate level of the day, Daniel Azancot joined the big stacks by turning a straight against two pair and a flush draw, fading all outs on a blank river.

Only 29 participants bagged up and will return to the Casino Royale on Wednesday at 3:30 p.m. local time. The level duration then increases to 40 minutes each and even 50 minutes on the final table. The action recommences with blinds of 2,000-4,000 and a running ante of 500.

The players keep their seat assignments from tonight and there will be a redraw with 24 players left, the tables will be balanced with 16 left for the money bubble and the final table redraw will be done when the last nine are determined. The event will play down to a winner on Day 2.

The second and final day of the $365 Six-Handed event of the 2016 World Series of Poker Circuit Caribbean saw nine hopefuls out of a 61-entry strong field return to the tables at the Casino Royale on Sint Maarten. After five levels and 15 minutes, Michael Lech was crowned the winner. He took home $6,400 and the first WSOP Circuit Ring.

Lech has more than $434,000 in WSOP cashes with the biggest payday of his career coming off a runner-up finish in this year's $888 Crazy Eights Event at the World Series of Poker. The American, who studies international business, just arrived on Sint Maarten, after having won the Punta Cana Poker Classic 2016 for $30,537 just last week.

Of the nine players remaining, Mohamed Bourhaleb showed up 45 minutes late after being stuck in traffic. By then, the field had been reduced to eight. Frederic Maniez had a day to forget and shoved his short stack with king-jack. Alexandre Annovazzi called with ace-eight and stayed ahead.

On the bubble, Lech doubled with nine-eight against the ace-ten suited of Bourhaleb after Tommie Janssen had previously doubled through the American with kings versus tens. Janssen assumed control of the secondary table and took a big pot off Joachim Lob before then, winning a big flip with pocket fives against the ace-king of Lob.

Tommie Janssen held more than 50 percent of the chips in play when the bubble had burst and 20 minutes after the restart, the field was already reduced to four. Bourhaleb ran with jacks into the kings of Willie Janssen to bow out in seventh place. Aroon Maharaj's ace-king found no help against the kings of Lech and the second player from Trinidad & Tobago followed soon after.

Sean Stoll defended his big blind against a raise of Lech and shoved a nine-high flop with jack-ten suited for the open-ended straight draw. Lech called with ace-seven for ace-high and the inside straight draw and saw the board blank out.

Willie Janssen doubled twice through fellow Dutchman Tommie Janssen and the former dominating chip leader then bowed out in fourth place. Tommie Janssen defended with ten-eight and check-called with top pair on the flop before check-calling all in after a turn that also gave him a gutshot as well. Lech had moved in with pocket jacks and the river blanked.

Willie Janssen followed soon after when he three-bet with pocket aces and shoved a jack-high flop out of the small blind. Lech called with jack-nine for top two and even made a full house on the river.

Upon restart, Alexandre Annovazzi came out on a mission and scooped several pots in a row with sheer aggression. That would fire back after just 15 minutes of heads-up action when the Frenchman five-bet jammed king-ten suited into the pocket kings of Lech. There was no upset on an ace-high board that gave Lech a full house and the American posed for the winner picture minutes later.