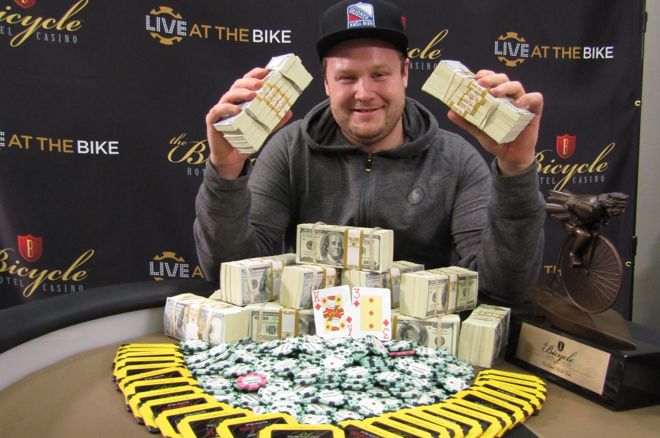 Swedish player Jonas Hagstrom waited out a maze of Day 1 flights in the Mega Millions XVI at The Bicycle Hotel & Casino in California, buying in directly to Day 2 for $4,300.

Chris Klodnicki was the most accomplished player to make a deep run into the final couple of tables, but he got felted in 12th when he got his short stack in with

and couldn't overcome an opponent with

, according to the live updates.

Massoud Eskandari held the chip lead when the final table began. Xiao Ruan was in the midst of a nearly unthinkable second straight Mega Millions final table after a fifth-place finish last August for $69,335 in a field of over 11,000.

A couple of eliminations into that final table, Eskandari extended his lead by busting Benjamin Chan with

all in preflop. He soon had half of the chips in play six-handed.

Stacks were mostly short all around outside of Eskandari, so Hagstrom was able to go from under 10 big blinds to second place in a hurry. He found a dream spot when he jammed over a Ruan open with

and had Keyue Wang wake up with

behind him. The aces held to send Wang out sixth.

A short-stacked Benjamin Nguyen went out fifth, and then Ruan got lucky with

all in against the

of Larry Serebryany, flopping a three and then holding on despite the presence of a Broadway straight draw for the unfortunate Serebryany. After Ruan took Serebryany's remaining chips, he took over the chip lead with about half of the total chips.

After a fruitless deal discussion, players sat down to massive blinds of 750,000/1,500,000 with only about 100 million in play. Hagstrom picked up another big pair in a great spot, waking up with kings when Ruan shoved in the small blind with

. The board got hairy for Hagstrom with

hitting to give Ruan a gutshot and a pair, but the

river was safe for the Swede to give him the lead.

Hagstrom then won a flip against Eskandari, and all of a sudden he had a 4-1 lead going heads up. He put the pressure on Ruan by shoving all in with

, but Ruan woke up with a dominating

and called. Hagstrom picked up outs when

flopped to give him a flush draw. The

paired him on the turn to bring still more outs, and the