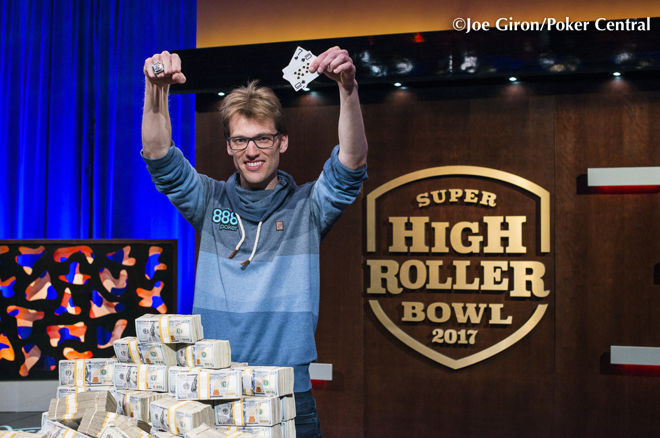 Vogelsang nearly doubled his career live cashes to almost $14 million with, shockingly, his first live win. The high roller mainstay had previously done no better than third, with his finish there at the 2014 $1,000,000 High Roller for One Drop for $4.4 million the previous highlight of his tournament career.

Vogelsang also moved up to second on the all-time money list in Germany behind only the incomparable Fedor Holz.

And it wasn't just prize money Vogelsang apparently won. He and his fellow Germans had an eight-way last longer for $2,000 apiece, so Vogelsang won that cash and bragging rights, plus a $13,500 World Series of Poker Main Event package provided by 888poker.

The day started out with only three remaining from the original 56 runners, but one lagged far behind the other two. Stefan Schillhabel had less than 15 big blinds to start the day. He experienced some early success running his 885,000 up to 1.6 million, but the fast start ended there at the hands of his fellow German.

Schillhabel had about 25 big blinds when he opened with ace-jack on the button and got three-bet big by Vogelsang after Schindler called in the small blind. Schillhabel shoved all in only to see his countryman turn over pocket queens and hold up despite a jack-high flop.

That set up the heads-up match viewers were expecting, and it proved to be a battle. Schindler had about a 2-1 lead early, and the early feeling-out period seemed to go mostly his way, as he picked off a big bluff to move to a 3-1 edge.

Schindler seemed to be on the brink of victory when he got Vogelsang to put in most of his stack before the river on a check-call line with a king-high flush draw in a three-bet pot against Schindler's turned top pair with ace-king. Vogelsang hit the flush on the river and checked, quickly calling all in when Schindler shoved.

The German moved into the chip lead himself and eventually had his own 2-1 edge. However, Schindler battled right back, and he eventually took a huge lead, chipping Vogelsang down to 2.7 million at 50,000/100,000/100,000 — the big blind paid the entire ante under this structure.

Then, Vogelsang hit another sick river. This time, he called down ace-five after limping the button when Schindler raised big blind and flopped a set of eights. Vogelsang flopped a gutter and got there on the river, shoving all in when Schindler checked and getting paid off. Schindler could only muck in frustration.

Shortly after that, Schindler attempted to pull off a river bluff-shove when he missed a combo draw that he picked up on the turn. The board had paired deuces on the river, weakening Vogelsang's two pair a bit, and he had only 30 seconds to make his move as he had used all of his allotted time extensions.

The pressure was on, but Vogelsang found the call button. He got out of his chair and pumped both fists, having won the biggest tournament of his career and joined Brian Rast and fellow German Rainer Kempe as Super High Roller Bowl champs.