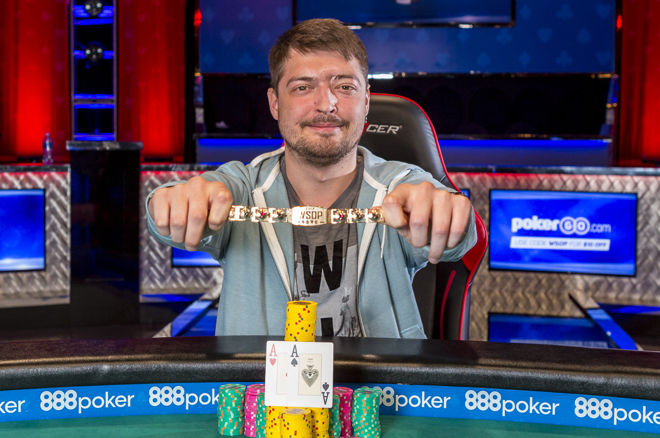 The stacked Event #42: $10,000 No-Limit Hold'em 6-Handed Championship is over, and Dmitry Yurasov has captured his first World Series of Poker gold bracelet in dramatic fashion. He defeated Tommy Chen in just nine hands from the time heads-up play began, and steamrolled the final table in just 58 hands.

This event attracted the cream of the crop with a total of 332 entries paying out 50 spots for a total prize pool worth $3,120,000. Yurasov claimed a first-place prize worth $775,923 along with a coveted gold bracelet.

In the final hand, Yurasov already had a commanding lead over Chen, and they saw a queen-high board by the turn. Chen moved all in over top of Yurasov's lead-out and got called quickly. Yurasov tabled two aces and Chen revealed top pair. The river was a brick and it was only fitting that Yurasov claimed the title with the best hand in poker after he dominated all of Day 3.

Yurasov, a professional poker player from Russia, has amassed just over $2 million in earnings after clinching this win. Before taking down this event, his best live cash came from the Prague EPT €10,300 No Limit Hold'em High Roller for $243,237 USD, finishing in third place. In addition to this, he has a total of five EPT High Roller final tables, and one EPT Main Event final table where he finished in third place.

The newly-crowned champion explained that he has been playing higher buy-in tournaments for a while but "winning this bracelet is a special achievement" for him. When asked about running so hot at the final table he said it felt like an "easy game". Yurasov plans on playing more tournaments in the United States, maybe even in Los Angeles, for example. He continued that his online background helps because he "always gets to keep himself in shape playing shorter games online."

The official final table of six came together after the elimination of short-stacked Grayson Ramage (7th place - $69,578). He got it in with king-queen off suit but ran into Yurasov's ace-king and that was the end of the road for him.

Two-time WSOP bracelet winner Kristen Bicknell was short and managed to find a double up once six-handed play began, but she lost a big pot to Yurasov just before dinner and was left with just five big blinds. Shortly after dinner, Bicknell called off her stack with king-three suited and was up against Chen's ace-eight off-suit. Chen flopped an ace and Bicknell couldn't catch up, settling for a payday worth $96,823 for her sixth-place finish.

As soon as Bicknell hit the rail, chips really started to fly. In the very next hand, Albert Daher ran into a cooler against Yurasov, where he turned a flush and that very same card gave Yurasov a boat. They got their chips in the middle and Daher had to settle for fifth place, pocketing $138,644 for his deep run.

Just eight short hands later, Artem Metalidi committed his remaining chips with a pair of sevens, finding himself flipping with the red-hot Yurasov's ace-queen off suit. He couldn't dodge a queen on the flop and pocketed $204,128 for fourth place.

Three-handed play lasted 12 hands, after which time Jacob Powers got his chips in good with ace-king, dominating Yurasov's ace-nine. He was standing on his feet and pumped up for a double up, but unfortunately for him, he couldn't fade a nine on the flop. Powers was visibly crushed, but has to be happy with his third place finish worth $308,783.

As mentioned, heads-up play didn't last long and Yurasov's heater topped off with him winning with two aces to clinch his first bracelet. Impressively, Yurasov eliminated all of the players on the final table, with the exception of Bicknell who fell to Chen.