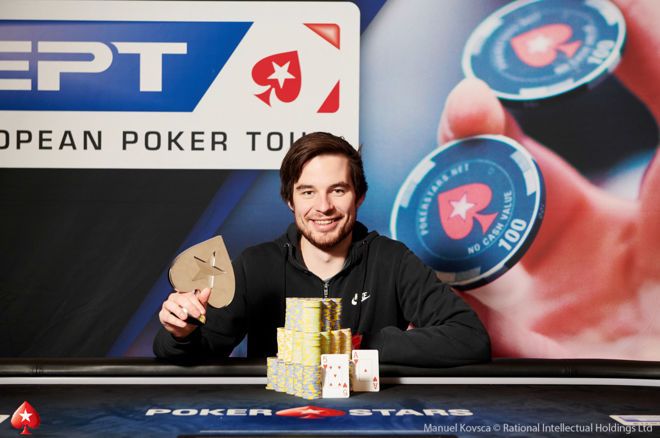 One day Frenchman Corentin Ropert was thinking about watching a movie, and the next he's won €277,560 in the second €25,000 Single-Day High Roller of the PokerStars European Poker Tour Prague festival.

Ropert told PokerNews that with things not going his way so far this festival, last night he contemplated putting on a movie, but instead opted to play the satellite to the €25,000 Single-Day High Roller.

"I saw that the winner of the other €25k [Thomas Boivin] had qualified through a satellite, so I thought why not? And here I am!"

This is the biggest cash of Ropert's career to date by far. In 2014, he finished fourth in the FPS Deauville Main Event for €60,100. Now he's cashed for almost five times that amount here in the Czech capital!

Here are the results from the final table:

Going into heads-up with a large chip lead on Japanese player Tsugunari Toma, he called the check-raise all in from Toma with trip fives and had his opponent drawing dead.

"The first twenty minutes of heads-up just didn't go my way. I didn't win a hand. When I saw the hand, I couldn't believe it."

Recap of the Day's Action

Jean-Noel Thorel became the first of many to fall from the 29 unique entries this event gathered. With five players reentering, that created a total field of 34 entries of which five would be guaranteed a min-cash of €57,140.

Shortly after registration closed, both Boivin and O’Dwyer were eliminated. Dietrich Fast and Charlie Carrel were battling for the chip lead meanwhile.

With two tables remaining, the likes of Thorel and Timothy Adams – who had swapped Main Event for High Roller at the very last minute busted – before Carrel scored a big double through Michael Soyza to jump into the outright chip lead ahead of Fast. Carrel turned top pair and rivered a flush and called to pick off the Malaysian's bluff with bottom pair. A short while later, Carrel sent Soyza to the rail in a classic race; tens versus ace-king. The pair held and the final table of nine was confirmed.

The early stages were remarkable in that besides the elimination of Juan Pardo, there was a spate of doubles and even triples.

Pavel Plesuv doubled twice and Dietrich Fast doubled and then tripled up as the chips swung back and forth.

Corentin Ropert fought back from being the short stack at the start of the final table to chip leader at the dinner break by tripling and then doubling up in quick succession.

When they returned, it wasn’t long until the next elimination. The final table hadn’t been kind to Carrel who came in as chip leader but was sent to the rail when his ace was out-kicked by that of Tsugunari Toma.

Not long after that, the bubble burst. Both Sergi Reixach and Ropert flopped pairs, but Reixach was outkicked, and he would fall in seventh. The remaining six players all guaranteeing themselves €57,140.

Plesuv finished fifth in the earlier Single-Day High Roller, but he would fail to improve on that finish in the second edition as he was eliminated in sixth before Norbert Szecsi bust in fifth at the hands of Fast.

That gave Fast a boost, but after bluffing off to Ropert with just king-high and getting called down by ace-high, Addamo finished off the German, and the tournament was down to three.

With an average of over forty big blinds, the pace was expected to slow down somewhat. However, when Addamo shoved ace-nine from the small blind, Ropert woke up with pocket nines to send the Australian out in third, one spot better than he managed in the other Single-Day High Roller.

Plesuv and Addamo were the only two players to cash in both events.

That elimination meant that Ropert held an almost 4:1 chip lead heads-up against Toma, but the Japanese player battled back to get the stacks almost to even. However, a mistimed jam from Toma into the trips of Ropert meant that he was drawing dead and the Frenchman was left to celebrate wildly on the rail with his jubilant compatriots.

"Having the support on my rail was incredible," said Ropert. "The tournament was very tough, but luckily I had quite a lot of good situations, and I was very happy with how I played. It was exhausting, but it's a crazy feeling."

Stay tuned to PokerNews for continued coverage of the PokerStars European Poker Tour festival here in Prague, with the €10,300 High Roller starting tomorrow. You can catch all the action as it happens right here.