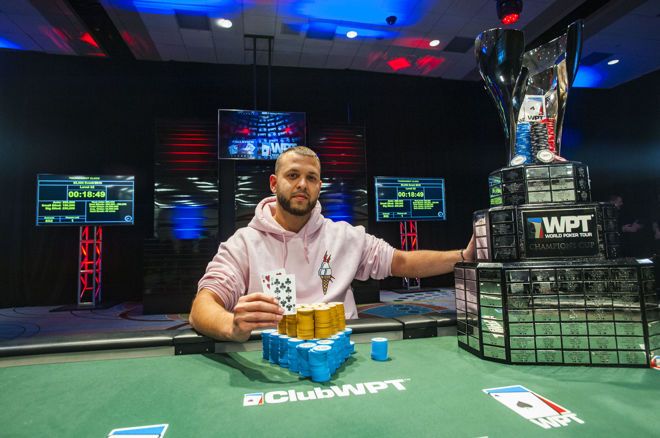 He got through a field of 602 entries for his biggest cash. Kiriopoulos had three previous six-figure scores, including a sixth-place finish in partypoker MILLIONS Canada last spring for CA$400,000.

"This one is special because it's home court," he told tournament reporters after the win.

The single-reentry event produced a prize pool of over $2 million despite having just 10 levels of registration and a single starting day. Ping Liu, Peter Jetten, Brian Altman, Luc Greenwood, Darren Elias and Andrew Chen were some of the players who cashed but missed out on the final table.

Kiriopoulos went into the final day with one of the shorter stacks at under 15 big blinds, but he found kings early in Day 3 and held against king-ten all in preflop to get his head above water and surpass 30 big blinds. He would make the final table with around 36 big blinds.

WPT regular Jake Schwartz also advanced to the final table despite having just a single big blind late on Day 2, as he was able to run it up and make the final nine with 57 big blinds.

€1 Million One Drop final table participant Andrew Pantling held the chip lead going into the final table and he busted the first player, Jason Sagle, when his queens held up against ace-king.

Pantling only increased his edge as Schwartz scored the next two eliminations of Brad Lampman and Garrett Dansereau to get the field to the official final table. By that point, Pantling held 9.5 million for 95 big blinds, out of about 25 million in play.

Pantling's aggression produced the first elimination, although he was only peripherally involved as he opened a pot only to have two players shove behind him. The first shipper, James Morgan, had

and he wound up knocking out Noeung Troeung, who called off about 11 big blinds with tens.

Kiriopoulos then took a huge chunk from Pantling to grab the lead. On a board of

and Pantling paid him with

, having turned a straight.

Pantling would get much of that back by making a flush against Morgan, who was crippled down to a few big blinds. He busted in short order when sixes couldn't hold against the

Kiriopoulos then raised and called the shove of Jake Schwartz, who had 12 big blinds and

and flopped an ace to bust Schwartz, playing at his fifth WPT official final table.

Three-handed, Kiriopoulos dropped a large flip to Yeung and was in third place with 20 big blinds. However, he got back in it with a double through Pantling after flopping a set against top pair in an unraised pot blind versus blind.

Yeung would then get his own double shoving 25 big blinds on the button with queen-jack, cracking Pantling's ace-king with a rivered queen. Yeung got the remaining eight big blinds when his deuces cracked Pantling's kings.

Kiriopoulos had a 2-1 edge heads up and Yeung never got much traction. He got very short and doubled up once in a race but it was over after about 35 hands when Yeung ripped in

on the button for 10 big blinds and ran into pocket tens.

The WPT Main Tour continues in just a few days with the highly anticipated L.A. Poker Classic, one of the few $10,000 freezeouts still out there on the poker schedule.