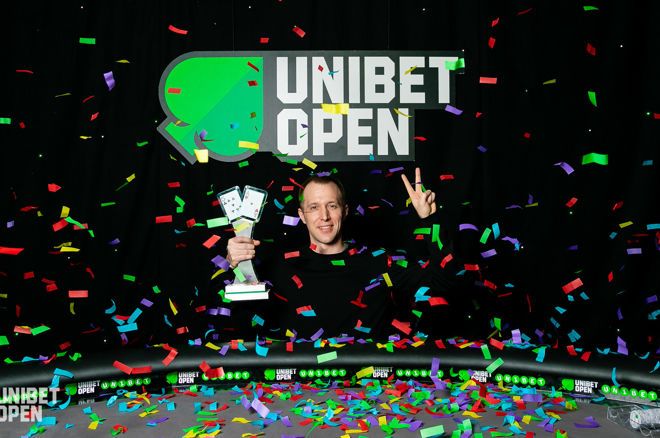 Another Unibet Open champion has been crowned at the New Montana Hotel and it was a familiar face on the winner shots, as Martin Soukup made history to become the third player to win a second Unibet Open Main Event title. Soukup joins Dan Murariu and Mateusz Moolhuizen as the only two-time champions, while 2016 Bucharest winner Traian Bostan fell short of exactly that feat and busted in third place.

Soukup defeated local player Marius Gicovanu in heads-up play after a fierce and very deep-stacked heads-up battle to claim the trophy once more and earn a payday of €71,000. Gicovanu applied relentless pressure throughout and that left him on the ropes three times. Twice he would double, but the third time he could not escape from elimination anymore to see Soukup emerge victoriously.

Quite remarkably, it is only the fourth cash for the Czech according to his Hendon Mob profile, and Soukup has played in 12 Unibet Open Main Events so far. All his cashes are exclusively from the Unibet Open, and the 33-year-old from Prague came close to a second title in the $1,100 European Open Special Edition in Las Vegas in 2017.

It was the second Unibet Open Main Event for Gicovanu, both times on Romanian soil, and the biggest score to date of the 29-year-old from Valcea was a runner-up finish in the 2017 EPT National for €372,349. Ultimately, Gicovanu ended up in the very same spot again and added another €45,310 to his poker resume.

Featured on the final table were six Romanians including Toni Judet, along with Unibet Poker ambassador Espen Uhlen Jorstad from Norway and eventual champion Soukup. The Unibet ambassadors Daiva Byrne, Dan Murariu and Dara O'Kearney were among those to cash and bust out on Day 3. O'Kearney entered the penultimate day eith just 3/8 of a big blind and made two pay jumps, bowing out in 29th place. Esports streamer Alan "hotted89" Widmann also showcased his poker talent at the tables and finished in 28th place.

The special ski-edition was designed to give all qualifiers and poker enthusiasts from near and far a chance to take advantage of the winter activities in the popular Carpathian mountains with an additional tournament day for the €1,100 Main Event and starting times in the early afternoon. The festival at the New Montana Hotel was held in cooperation from PokerFest Romania. A total of 366 entries created a prize pool of €366,000 and the top 47 spots were paid.

Cristian Grecu and Soukup were the two chip leaders and the latter scored the first knockout of the day after he four-bet enough to put Catalin Moraru at risk. After some consideration, Moraru called it off with ace-king and Soukup held up with pocket eights to establish a solid lead with seven players remaining.

Next to head to the rail was Jorstad. The Unibet ambassador from Norway had locked up his second Unibet Open cash and saw the vast majority of his stack vanish when eventual runner-up Marius Gicovanu cracked his pocket jacks with pocket fives. A five on the flop left Jorstad on just five big blinds and he was unable to spin them up, bowing out in seventh place when he came up short with queen-six versus queen-nine suited.

Stefan Drusca took over the lead early on, but lost a big flip with ace-king suited against the pocket jacks of Gicovanu. Drusca would have to settle for sixth place when he got it in with ace-queen against the pocket kings of Traian Bostan. An ace and a queen appeared on the flop while Traian had a flush draw, and instead made the runner-runner nut straight.

The field was reduced from five to three in a big three-way all in. Judet three-bet jammed his short stack with ace-king and Gicovanu isolated with pocket sevens. Initial raiser Grecu snap-called with pocket kings, but a seven appeared right away on the flop to give Gicovanu another crucial set.

Down to the last three, two former champions were still in the running for the repeat victory. Bostan ended up very short in chips and doubled twice, but lost a flip with pocket eights against the ace-ten of Gicovanu to set up the duel for the title and trophy.

While Gicovanu had done the most work to reach the heads-up stage and entered it with a slight chip lead, it was all about Soukup. Every significant big pot was sent over to the Czech and Gicovanu found himself on the ropes three times. He managed to double up twice, but fell short of the win when his king-ten ended up second-best to Soukup's ace-five.

Highlights of the Festival in Sinaia

*deal of the last four players and flip for the trophy

The festival in cooperation with PokerFest kicked off with the Battle of Champions, an invitational event that was won by Deivis Rinkevicius. The next day belonged to the esports streamers, as the Tag Team Championship and esports Battle Royale XII determined their champions on the live stream table. John "Swifty" Pyle and Alexandre Reard earned the bragging rights and Pyle came narrowly close to make it back-to-back wins as he finished second to Kevin "Rotterdam" van der Kooi.

While the Main Event took over the spotlight in Sinaia, several Side Events crowned their champions and Reard's wife Aurelie won a €150 Turbo Side Event for €2,600 on their 15 year anniversary. Alexandre went on to dominate the €2,200 High Roller from Day 1 and all the way to just five players remaining on Day 2 before finishing second to Andy Hills.

After her deep run in the Main Event, Daiva Byrne took over her hosting duties in the QUEENRULES Ladies Event and ended up winning the trophy and €800 in a field of 28 entries.

Last but not least, the €550 DSO Cup attracted a field of 172 entries to create a prize pool of €83,420 and the top 23 spots were paid. Dara O'Kearney, who cashed in the €1,100 Main Event as well, finished 7th for €3,050 and the final four players agreed to a deal. The three Romanians Ionut Decher, Andrei Epure and Catali, as well as Finland's Antti Tiainen flipped for the trophy, which Tiainen won with eight-three off suit.

The next Unibet Open takes place in London in May 2019, and the online satellites are already available on Unibet Poker.