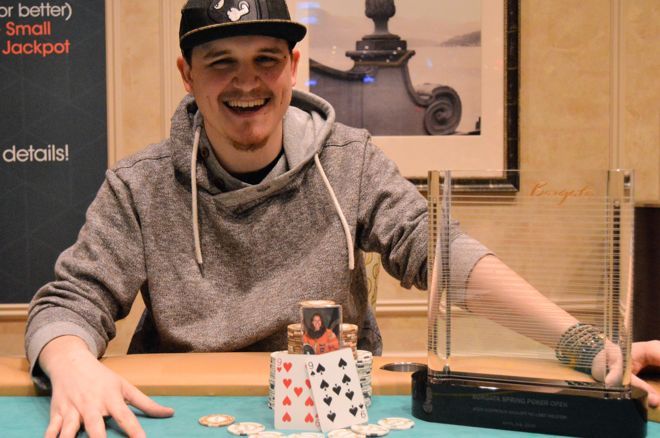 For the second time, Alex Rocha has conquered one of the massive Borgata multi-flight reentry events.

Rocha made his way through a field of 2,199 entries to make it heads up with George Grabe in Event 1: $600 Deep Stack Reentry, at which point the two came to a deal and played out the match. Rocha wound up victorious for $180,610, with Grabe taking a handsome consolation prize of $150,000.

Carrying a $1 million guarantee, the event drew enough entries to surpass that number with a pool of more than $1.15 million. Dan DiZenzo, Victor Ramdin, Aaron Mermelstein, Greg Himmelbrand and Vinny Pahuja were some of the regulars making runs into the money but missing the final table.

Rocha, meanwhile, had a big stack early on in Day 2 and carried it over into Day 3 on Saturday, according to the live updates.

Steve Sarmiento looked likely to make a run into the final table but wound up busting 13th on a nasty beat where he got aces in against kings and flopped a set, only to watch as running hearts gave his opponent a flush.

Rocha and start-of-day leader Paul Vacchio were well ahead of the field with nine left, although both players were only around 50 big blinds so it remained anyone's game. Indeed, by the time play reached five-handed, Rocha had the second-shortest stack and everyone was below 40 big blinds.

Vacchio was still vying for the lead but he got his ace-queen in against an anonymous player's ace-king to lose a chunk, then ran queens into ace-king that two paired to go bust in fifth.

Rocha then won a flip for his tournament life, when Grabe opened button and called a three-bet shove for just under 20 big blinds. Grabe's deuces couldn't hold against

as Rocha found a jack on the flop to survive.

Rocha would then get coolered on a

board, running his queen-jack into the queen-ten of Grabe to slip to 12 big blinds.

However, he'd mount a comeback and bust the anonymous player with queen-ten over ace-five. After Grabe busted Yan Wang with top pair and a better kicker, Grabe and Rocha went heads up with Grabe holding about 36 million of the 54 million chips in play.

The match would go back and forth, with Rocha grabbing the lead then Grabe hammering him back down. At some point, the two made a deal, but there was clearly money left on the table as they played on. Eventually, Rocha held the lead and there was only about 70 blinds on the table. Grabe tried shoving over his limp with

but Rocha had been trapping with

and faded a backdoor flush draw for the win.