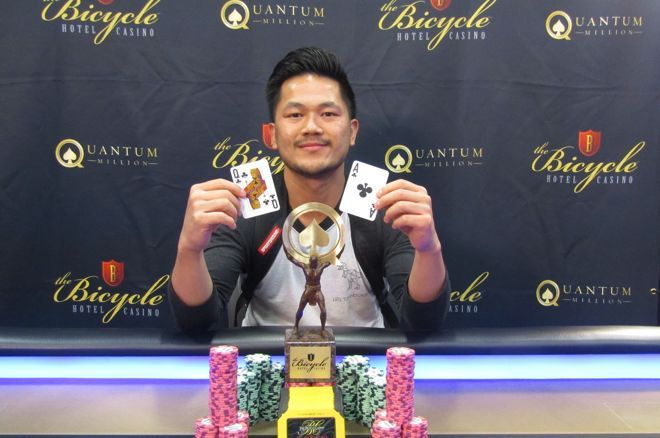 The Bicycle Casino recently wrapped its Mega Millions XX event, a tournament that offered a week and a half of Day 1 qualifiers. It also allowed players to buy-in on Day 2, and by the time registration closed the tournament drew 7,500 entries and created a $1,457,635 prize pool. It was a massive undertaking, and in the end, Tuan Mai was crowned champion and took home $199,000.

Mai came on strong five-handed when he amassed more than half the chips in play, which was enough to take him all the way to the end, or at least put him in prime position to negotiate a heads-up deal with Cody Bell. Bell got $174,615 for his part.

"It feels amazing it feels great," Mai said after the win. "I fired the last bullet I wasn't even supposed to play the tournament. And I took it down.

"A few of my buddies played and I was on my way back to Vegas for the $1,700 Bally Main Event and I told my girlfriend this is probably a better prize pool so I played it. I only had $250 on me my buddy had to zelle me $300 to get in. And I didn't pack enough clothes I've been wearing this for three days!"

According to updates from the event, Sanjay Mayekar was the first player to bust the final table. It happened on the second hand when he got his extreme short stack all in with ace-eight and lost a flip against Bell’s pocket fives.

Hung Le lost a big pot early on and got the last of his chips all in preflop with king-ten. He was up against Mai’s pocket queens and failed to get there as the board ran out jack-high. From there, Adam Weinraub busted holding Big Slick after losing a race to Bell, who held pocket sevens.

Mohsin Charania took his leave in sixth place when his king-queen failed to get there against fellow World Poker Tour champ Sean Jazayeri’s ace-jack, and not long after, Phong “Turbo” Nguyen followed him out the door losing king-five against Jazayeri’s pocket eights.

Jazayeri was the next to go after jamming with king-jack into Mai’s pocket jacks. The fishhooks held and Jazayeri had to settle for fourth place and $66,190 in prize money.

With three players remaining, Mel Weiner got his short stack all in with ace-deuce only to run it smack dab into Bell’s ace-ten. The kicker made the difference and Weiner was sent to the rail in third place for $87,050.

Once it was down to the final two players they talked about a deal and worked one out that gave Mai the title and $199K in prize money.

"I never lost the lead — Turbo got close but I hung on the whole way," Mai concluded. "I'm a beast man. I beasted the whole final table!"

The Bicycle Casino will host its next big event, the Summer Series, in June.

Photos courtesy of The Bicycle