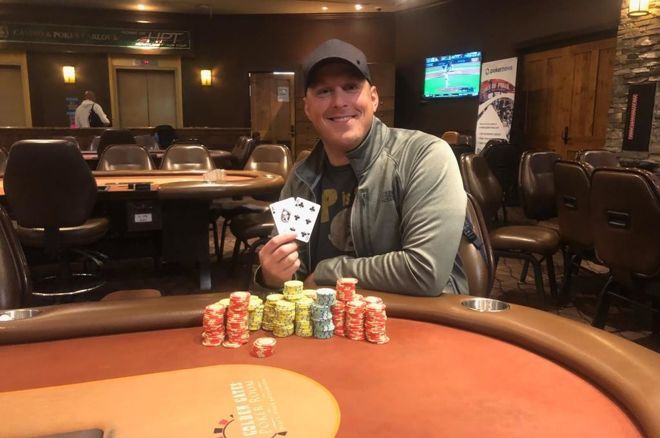 The August 2019 Colorado Poker Championship (CPC) culminated on Wednesday with the $2,500 High Roller event. After last year’s edition saw 32 runners participate, the 2019 version received a total of 49 entries, a more than 50-percent increase. That generated a total prize pool of $115,150.

The tournament boasted an excellent structure that resulted in over 15 hours of play before a winner was declared. When the final hand was dealt, Matt Livingston was the player with all the chips, earning a $40,300 first-place prize to go along with the acclaim of being the CPC High Roller champion.

Livingston, a Windsor, Colorado resident with over $740,000 in lifetime earnings entering the day, had made several final tables in CPC High Roller events already in his career. However, he had never finished deep enough to make it into the money. He spoke before the tournament about one such time where he had one-third of the chips in play when the unofficial final table of nine was reached. From there, he was unable to make any hands and found himself dry on chips prior to the bubble bursting.

Today was a different story. Livingston was able to accumulate chips early, increasing his starting stack of 40,000 by nearly 25 percent during the first two hours of play, a time when starting stacks ranged from 200-400 big blinds in depth. From there, he continued to chip up through aggressive play, showing a three-bet bluff with ace-king high on a nine-nine-four flop to bring him up to 60,000.

After the dinner break following Level 9, Livingston’s stack grew to 160,000, where he found himself as the chip leader in the tournament at the end of Level 12. By the time the unofficial final table of nine was reached in Level 15, his stack had eclipsed 400,000 and he found himself with over 20 percent of the chips in play.

When the final nine were reached, four more eliminations were still needed to make it down to the money. On the first hand after the redraw, Rich Dixon ran top two pair of kings and queens into Mansour Alipourfard’s flopped set of fives, leaving him with two big blinds. He busted on the next hand and it would be another hour until eighth-place finisher Anthony Martinez was eliminated after finding himself short, running his pocket threes into the pocket jacks of Jon Cohen.

Thomas Heine was the next to go, taking seventh place after he unsuccessfully three-bet all in with nine-three suited. Danny Gonzales was the original raiser in the hand and was happy to get stacks in with his pocket aces, which held to send Heine on his way.

This brought the field down to six, putting the tournament onto the bubble. Bubble play lasted for two full 40-minute levels, with Livingston taking full advantage of the situation. During those two levels, he eclipsed the 1 million-chip mark, reaching 1.16 million when he knocked out Erik Macias in sixth place after hitting a wheel with ace-five to Macias’ ace-six, taking the tournament into the money.

Shortly after the bubble burst, Alipourfard (5th place - $10,360) and Bobby Opila (4th place - $14,970) were eliminated within a five-minute span, when Alipourfard’s king-jack suited was unable to top Gonzales’ ace-queen and Opila’s ace-seven remained no good against Livingston’s Big Slick.

Three-handed play began with Livingston in possession of 1.4 million, over 70 percent of the chips in play. Gonzales was second in chips with 367,000 and Cohen had the remaining 186,000. The three battled without anybody gaining much ground until the blinds went up and Cohen found himself short. He got his last 92,000 in with ace-eight, only to find himself up against Livingston’s ace-jack. His hand remained second best and he was eliminated in third place ($20,730).

Livingston then found himself with a chip advantage of 1.617 million to 343,000 entering heads-up play. Over the course of the 25-minute heads-up match, he ground Gonzales down to a 10-to-1 chip lead before doubling him up with ace-ten to pocket fours. He kept grinding away, getting him back to below 15 big blinds before getting all in with ace-six to Gonzales’ ace-nine. By the turn, Livingston had a six-high straight with a nut flush draw, leaving Gonzales drawing to two outs to a chop in order to stay alive. He was unable to do so, becoming the runner up of the tournament as Livingston was crowned champion.

Get 20 No Deposit Spins and Play Slots!