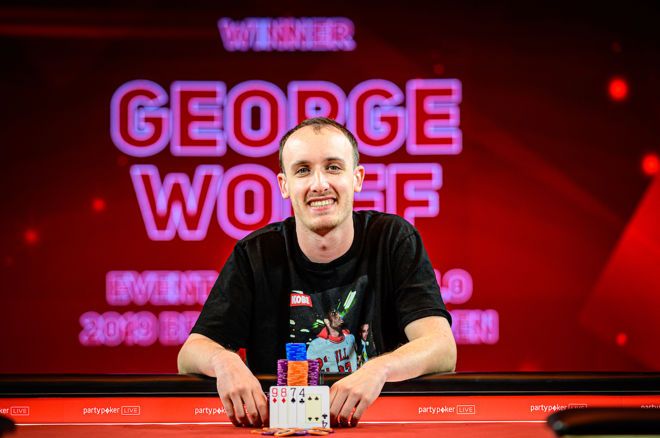 The British Poker Open, presented by Poker Central, continued on Wednesday with some four-card action, and pot-limit Omaha aficionado George Wolff emerged as champ. He topped a field of 30, slightly boosted from the 26 entries in the first event, for a win worth £120,000 (~$147,000).

For Wolff, it's the first recorded live tournament win and one that pushes him past $800,000 in cashes.

"It was a really tough final table, as tough as any high stakes cash game," Wolff told Poker Central. "For the last eight or nine months, I've been playing more tournaments and it definitely feels really cool to win one."

Wolff had a banner Day 1 and took a huge chip lead into the final table, according to the live updates. He held about double the stack of his nearest competitor and he kept everyone at arm's length by scoring eliminations of Cary Katz and Anton Suarez to take almost half of the chips into Day 2 on the bubble.

On the final day, streamed on PokerGO, the bubble began with online PLO legend Jens Kyllonen in the most danger of bubbling as the short stack.

That's exactly what would occur as Kyllonen flopped a set of sixes only to see Sam Soverel hit a straight on the river.

His fellow Finn Joni Jouhkimainen would follow in fifth place, first to cash. He was left short after running into Gavin Cochrane's set of aces, and Stephen Chidwick would finish him off.

After Cochrane fizzled out in fourth, the last three players had plenty of chips, and a lengthy battle ensued.

. The river brought a nut flush for Soverel, though, and Chidwick was forced to battle back from a short stack.

Climb back he did, at least a bit, but he'd still ultimately go down in third. Soverel would bust him and end Wolff's reign as leader in the process, after he flopped kings full and slowplayed them. Chidwick had trip kings of his own and lost all of his chips on the river. setting up Wolff and Soverel heads up.

Stacks weren't too deep by the time heads-up play rolled around, but it still went back and forth for a bit. Wolff grabbed the lead, but Soverel took it right back and both were soon under 20 big blinds.

Each player hit a set in a pot that was checked up to the river, but three fives for Wolff set him up with a decent lead as Soverel's value bet with threes backfired on him.

On about eight big blinds after that, Soverel got in with a slight edge holding

. An ace-high flop gave Soverel a shot to get back in, but Wolff turned two pair and held on the river to secure the win.