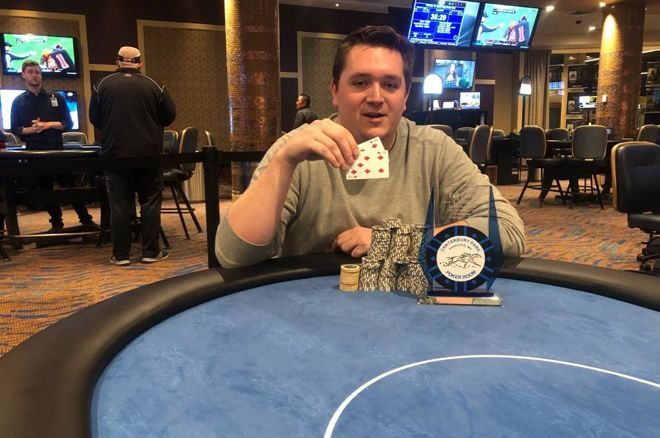 Eight players returned to Day 2 action for the 2019 Canterbury Park Fall Poker Classic $2,500 High Roller with their eyes set on victory out of the 28 entries to have joined. Four and a half hours later, a champion emerged in Ian Matakis, who earned $32,242 for his victory.

“This is an awesome birthday present,” Matakis said in an interview afterward. When Matakis joined the tournament yesterday he was 21 years of age. Now a year older and wiser, he was able to wade his way through a final table that he described as very tough, saying that “nobody was giving anything up, everybody was playing to win, and it was a lot of fun.”

"Nobody was giving anything up, everybody was playing to win."

Matakis’ journey to triumph saw him take a big stack into the later levels of Day 1 before running pocket jacks into the pocket queens of eventual third-place finisher Jon Hanner ($12,897), who then took over the chip lead and held onto it for the remainder of the evening. Matakis then found himself fourth in chips among the eight who returned for Day 2 with a slightly above-average stack.

Blake Bohn entered the day sixth in chips and became the first elimination when he shoved ace-queen into the pocket kings of Vic Peppe just 15 minutes into the day. Twenty-five minutes later, Daniel Schmidtknecht was the next to fall when he three-bet ace-ten into Joseph Beasy’s pocket queens and was unable to get there.

Meanwhile, Matakis started the day trending downward and eventually found himself short. He won a coinflip with pocket nines against eventual runner-up Jeff Petronack's ($19,345) ace-jack to get back in the mix, leaving Petronack short along the way. However, Petronack would soon find a double and claw his way back into contention as Kou Vang became the next to hit the rail when his ace-six was no good against Peppe’s ace-jack.

Play then went on for an hour, with Petronack taking the chip lead in that time. Peppe became the shortest stack and was the next to exit when he shoved ace-nine all in preflop and ran into Matakis’ ace-king. The tournament was then on the bubble with four remaining and three getting paid, and play continued for another 40-minute level until Beasy’s ace-queen was unable to get there against Petronack’s pocket fours.

It wasn’t long after the bubble burst until the then-short-stacked Hanner lost a coinflip with pocket eights to Matakis’ ace-king to send him home in third place and take the tournament heads up, with Petronack entering the match with nearly a two-to-one chip lead over Matakis.

However, Matakis took the momentum to begin the match. He pulled even, took the lead, and then pulled away before getting stacks in with king-jack suited against Petronack’s king-seven. A seven in the window scored Petronack a double and gave him back the momentum as he then accumulated up to nearly three-fourths of the chips in play at one point.

Matakis did not give up, though. He won a large pot with a turn shove and then picked off a river bluff from Petronack to get stacks back to nearly even. He never looked back, pulling away as the blinds got high enough that he shoved all in with eight-seven suited from the small blind on the final hand of the tournament. Petronack called with king-queen and Matakis flopped a nine-high straight. A jack on the turn gave Petronack outs to a redraw, but he would not fill up on the river to leave him as the runner up.

As for Matakis’ plans in the immediate future, he said with a smile: “I am going to hop in the Main (Event) right away. I would like to get tomorrow off if possible!”

PokerNews' coverage of the 2019 Fall Poker Classic at Canterbury Park continues with updates from the $1,100 Main Event.