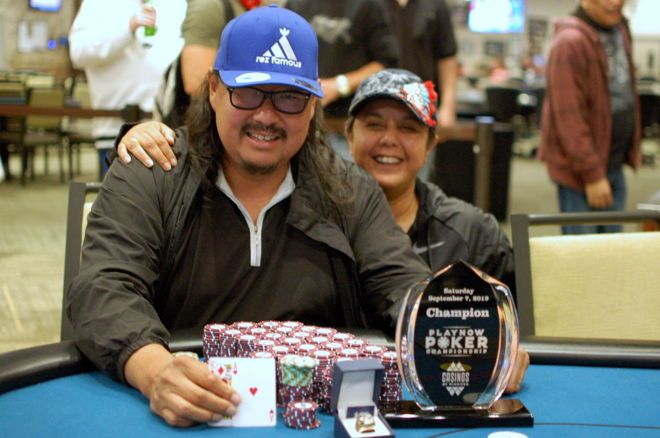 The $1,100 Main Event of the 2019 Fall PlayNow Poker Championship is in the books, and Sheldon Kent is the champion after powering through a field of 233 players to end up heads up against Dylan Ellis. Kent took it down after just a short heads up battle for CAD$40,222 (USD$30,574).

Day 1 started rather slow as it took a while to fill up the tables, but by the time registration closed, a total of 233 entries had been recorded. They played a full 15 levels on Day 1, and in the end, only 46 players survived to come back for Sunday's Day 2.

Among the notables to fall on Day 1 were players like Kyle Hartree, Deven Lane, Norbert Rosario, and Mark Charles, who were all looking for a deep run in the Main to gain points in the Player of the Series race after making deep runs in one of the two opening events. Finnish-Canadian fashion mogul Peter Nygard built a huge stack during the middle part of Day 1 and was near the chip lead at one point, but ultimately he went card dead and busted in the final level of the day.

Among the returning players for Day 2 were some big names. Manitoba's second more decorated player, Patrick "@SuperSerda" Serda, made Day 2 but busted in a brutal spot where an under pair got there against his over pair. Spring 2018 Main Event champ Shaner Yo made Day 2 but was the bubble boy when he ran his pocket tens into the pocket aces of Ethan Ellis.

Action went pretty quickly through the whole day, and it didn't slow down much when players got into the money. It only took about three hours to play down from the bubble to the final table.

Once play got four-handed, the remaining players decided to chop up the remaining prize pool. Chris Clisby, Dylan Ellis, Sheldon Kent, and Anders Prokopowich all agreed to take $32,000 each, and leave the remaining $16,444 up top to play for. Once the deal was set, things proceeded a little more quickly. Clisby was the first out in fourth for a prize of $32,000, and Prokopowich went out in third for the same payout.

That left Ellis and Kent heads-up for the title, and they decided to cut a further deal. The $16,444 that was left up top got chopped down the middle, guaranteeing both players $40,222 for their troubles. Initially, they thought they were playing for the trophy, the ring, the jacket and the Player of the Series title, but after the third-place exit of Prokopowich, he locked up the Player of the Series prize, so Ellis and Kent were just playing for the Main Event prizes.

Heads-up was a battle but ultimately it came down to who ran best. Ellis got his money in with the best hand holding king-four versus the jack-eight of Kent. However, the latter was running like Usain Bolt and hit a jack on the flop. Ellis couldn't catch up and he had to settle for second place.