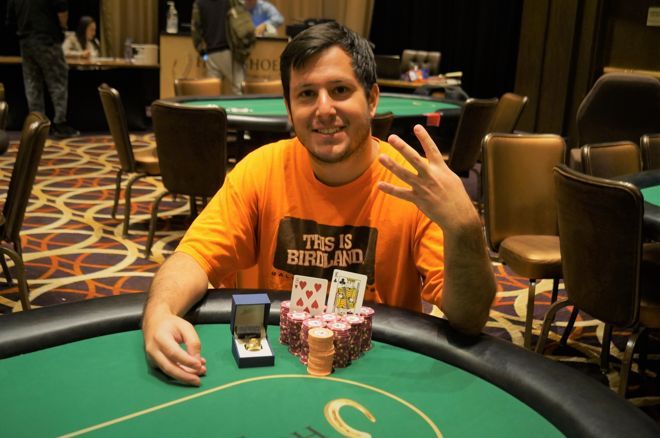 The $3,250 High Roller at Horseshoe Baltimore has come to an end after two days of play, and Nicholas Verderamo has become the latest World Series of Poker Circuit winner after topping a field of 29 players, emerging victorious for his fourth ring.

Verderamo overcame a tough line-up of runners to take home the $34,730 first-place prize, along with a shiny new WSOP Circuit ring to add to his collection. "This is my fourth stop, I have three here [rings] in Baltimore. I like the rings and when I come here the goal is obviously to win a ring so it feels good."

"This is my third final table at this stop, I got second in the monster to AJ [Kelsall] and was one card away from winning. He spiked an ace on the river but he is a very good player, long two-hour battle. I had a chip disadvantage three-to-one in that, whereas this I had a three-to-one advantage, so it was nice to win after getting second a few days ago."

Verderamo adds the feat to a resume that already had over $250,000 in career earnings. "I late registered for Day 2 and it feels good, I ran really well," said Vanderamo after the victory.

The final day of the high roller saw six players returning from Day 1 and an additional seven jumped in as the late registration period was open until the start of play on Day 2. Those seven brought the total to 29 entries for the event, which created a total prize pool of $87,000 with the top five landed a payday of at least $6,578.

The day began with 13 total, after just over an hour of play only nine remained and the final table was set. Leading the way at the time was An "Shamoo" Huang with Verderamo coming in as the final table short stack. Three players quickly took an exit as Adam Hendrix, Matt Stabia, and Nitis Udornpim headed to the rail. Just six remained and just one more player was going to be headed home without a slice of the pie.

During the bubble was when Verderamo really started to shine, doubling through the at the time chip leader Huang during a race. The very next hand saw Verderamo open and Hank Sitton moved all in. Verderamo snap-called putting Sitton at risk of being the bubble boy. Sitton tabled ace-queen, and unfortunately for him Verderamo had ace-king and the board ran out dry. Verderamo took down another monster pot and sent Sitton out on the bubble during the process.

Five-handed play lasted for almost a level before someone took an exit and that person was Christian Harder. Huang opened and Harder moved his remaining stack all-in. Huang called, tabling ace-jack and was flipping after Harder turned over a pair of snowmen. The flop came six-high but a jack turn and river cemented the pot for Huang as Harder was sent packing in fifth place.

It was just a few hands later that AJ Kelsall found himself all-in against Verderamo. Kelsall shoved with king-queen of spades from the cutoff and Verderamo woke up with a pair of cowboys in the small blind. A jack-high flop had Kelsall drawing thin and when the board paired on the turn, it was all she wrote for the beloved circuit regular.

Huang dropped a large percentage of his stack shortly after three-handed began when he shoved an all-diamond flop with ace-queen of clubs and Verderamo called holding ace-seven, but with the ace of diamonds. The six of diamonds landed on the turn, doubling Verderamo up to a monster stack as Huang was left with around 15 big blinds. Huang managed to get a few all-in's through with success, but ultimately he took an exit when he shoved jack-seven on the button and Verderamo called with ace-seven. Huang picked up a lot of help on the turn but failed to hit the river and he was then eliminated in third place for $14,417.

Heads-up play started with Verderamo holding a three-to-one chip lead over Jonathan Gilliam and it didn't take long for him to extend that lead. Verderamo opened a hand and Gilliam was quick to defend. Gilliam check-raised the turn, Verderamo called and then Gilliam fired in a monster bet on the river. Verderamo called with second-pair and Gilliam quickly annoucned king-high, sending the pot to Verderamo thanks to a great read.

Gilliam doubled up shortly after losing most of his stack but could not fend off the aggressive style that Verderamo had suddenly brought into play and what seemed to be the inevitable happened shortly after. Gilliam opened, Verderamo defended and the flop came down ace-high. Verderamo check-called a bet on the flop and then check-raised a bet on the turn.

Gilliam snap-called with his ace-queen, only to see that Verderamo had turned two pair. The river bricked out and Gilliam was eliminated in second place for a respectable $21,464. Verderamo took home the $34,730 first-place money, along with his fourth gold ring.

That wraps it up for the PokerNews live coverage of the Horseshoe Baltimore WSOP Circuit stop. Next stop on the bracket is in Horseshoe Hammond (Chicago area), so tune in for all of the coverage next week.