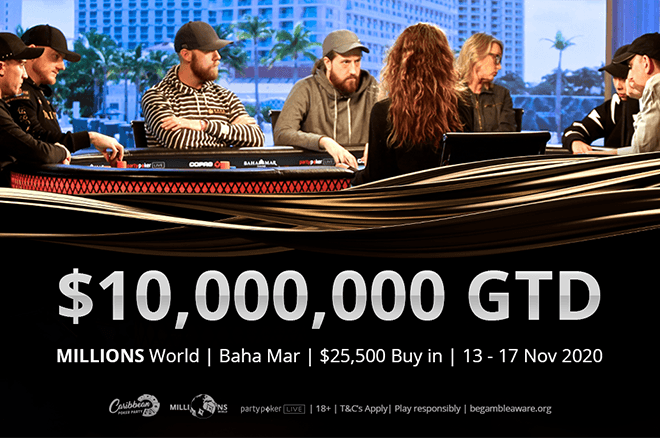 The partypoker LIVE tour is heading to The Bahamas later in the year for the 2020 edition of the Caribbean Poker Party. MILLIONS World, is super high roller event, has been announced, as have the amazing satellites feeding into this $10 million guaranteed tournament.

MILLIONS World takes place at the luxurious Baha Mar resort as part of the Caribbean Poker Party. It commands a $25,500 buy-in and features a $10 million guaranteed prize pool, which you’d think puts it firmly in the realm of a tournament only for poker’s elite. You’d think wrong.

partypoker needs 400 entries in order to hit the huge $10 million guarantee of MILLIONS World and it appears a significant number of those entrants could be from the more recreational side of the player pool. Why? Because partypoker is making it possible to win a $32,000 MILLIONS World package for free!

Satellites for MILLIONS World have been given the “phased” treatment by the folks at partypoker. All phases eventually feed into the MILLIONS World Sunday Final where there is no direct buy-in; you have to play your way into it!

The current satellite tree starts with the daily MILLIONS World Freerolls. These award $5.50 tickets to the MILLIONS World Round 1 satellites. Progressing from this phase puts you in the $55 buy-in MILLIONS World QTR Final, which in turn goes into the $530 MILLION World Semi Final.

All of the various phases see you play a predetermined number of levels with you progressing to the next stage (you’re automatically registered for it) if you have chips in front of you when the curtain comes down on play.

The MILLIONS World Finals have five packages guaranteed, with each package awarding its winner:

As if the chance to win a $32,000 package for free wasn’t enough to get you clambering for your computer mouse, wait until you read about this special limited time offer.

The first 100 winners of MILLIONS World packages get their hands on a $5,300 Caribbean Poker Party Main Event seat for free! That’s a total of $530,000 worth of added value.

At least five packages will be won in the first final on March 22nd, will you be in the running for one?