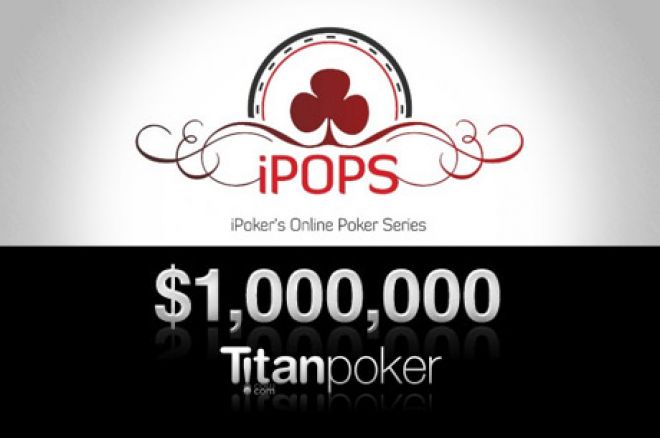 Titan Poker's iPoker Online Poker Series (iPOPS) is getting under way later this month, and players can already begin qualifying for the exciting tournament series that features a $1 million guaranteed prize pool!

The second installment of iPOPS will feature five tournaments staged between April 29 and May 6. The series will appeal to all types of players, and include both low-priced events and a high roller tournament. Satellites are running now for the five iPOPS tournaments:

Action at the iPOPS $125+10 event on May 6 will pause once 27 players remain in the tournament. Action will then resume at the Gran Casino de Barcelona on June 1!

Qualifiers must agree to wear Titan Poker merchandise when playing the live event. Packages are not transferable and there is no cash alternative. Travel documents must be in order and players must have the necessary visas to travel to Barcelona.

Players can reserve their seats at the five iPOPS tournaments by buying in directly, or win their way through the inexpensive qualifier satellites running around the clock in the Titan Poker software.

Satellites to the Titan Poker iPOPS are running now through May 5, 2012 with buy-ins starting as low as 11 cents. Over 200 iPOPS tournament tokens are up for grabs! For a full list of iPOPS Online Main Events and satellites, click on the "iPOPS Online" tab in the poker client.

To learn more, visit Titan Poker. You can also sign up for a Titan Poker account through PokerNews and receive a special bonus of 200% up to $2,000, just use bonus code “POKERNEWS.”

If you experience any problems with this or any of our promotions, please contact our Ticketed Promo Support System.