Check Out these PokerNews-Exclusive $2K Freerolls and Money Added PKOs at PokerStars! 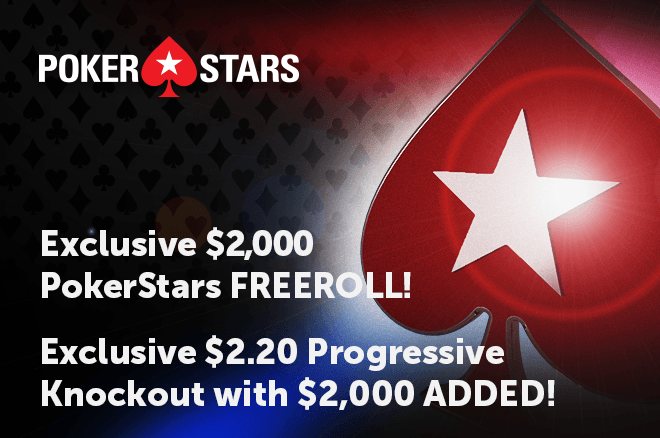 PokerNews and PokerStars enjoy a special relationship and you now have the chance to play in $4,000 worth of freerolls and three PKO tournaments with a combined $6,000 added to their prize pool thanks to this partnership.

This special promotion is only open to PokerStars players who downloaded PokerStars via PokerNews and used our marketing codes. You also need to have made your first real money deposit in 2017, 2018, or 2019 to be eligible.

Two freerolls, each with a $2,000 prize pool, are waiting to be played by you at PokerStars on Apr. 7 and May. 5 at 3:05 p.m. ET. These freerolls have 10-minute blinds and are played on nine-handed tables and are listed in the PokerStars lobby with the tournament name PokerNews Freeroll $2,000 Added.

Winning one of these freerolls will give your bankroll a sizeable boost, plus give you bragging rights over your fellow PokerNews readers.

PKO tournaments, or Progressive Knockout Tournaments to give them their full name, are a great way to play tournament poker while reducing your variance because you win money for each opponent you eliminate from the event.

We have three PokerNews-only PKO tournaments for you to play, each costing $2.20 to enter and all three seeing PokerStars add $2,000 to the prize pool in addition to any prize money accumulated through buy-ins.

The bounty element adds an exciting dynamic to PKO tournaments and the bounty payments can grow large towards the latter stages. This is because your own bounty increases with every opponent you eliminate, making you a more attractive target for your opponents and vice versa.

For example, if you eliminate a player with a $1 bounty on their head, you automatically win $0.50 of that bounty and the other $0.50 is added to your own personal bounty! Should you be the last player standing, you win the first-place prize, your opponent's bounty, and the bounty that is on your own head, which could be huge by this stage!

If you already have a PokerStars account that you created via PokerNews and made your first deposit during 2017, 2018, or 2019 you will receive tickets for the freerolls and be able to buy into the $2.20 PKO events. Those without a PokerStars account can follow these simple steps below and you’ll be up and running in next to no time, plus have a 100% up to $600 first deposit bonus in your account.