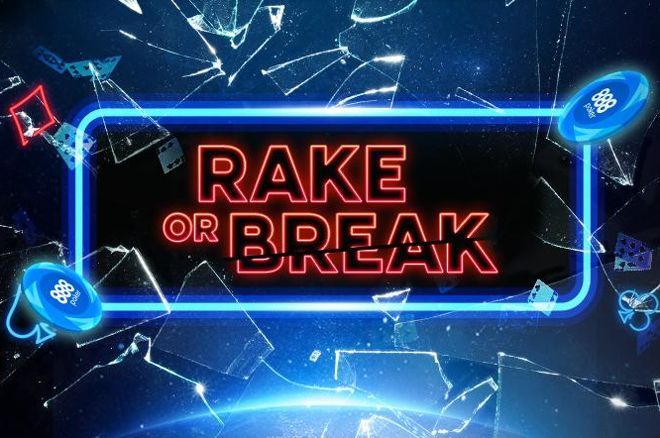 How would you feel about getting your tournament rake returned to you when a target prize pool is not met?

This is precisely the idea behind the new Rake or Break tournaments coming to 888poker on Sunday, March 24 where you will either play for a big prize pool or have your rake refunded.

The concept is innovative and simple to understand. In Sunday's Rake or Break tournaments, a targeted prize pool is established and if it is not met, all registered players will be refunded the rake they paid. What's more is that if the target is met, the prize pool target for these three tournaments will be increased by 10 percent the following week on Sunday, March 31.

The biggest tournament of the three is the Rake or Break Main Event taking place at 6 p.m. GMT. The tournament boasts a $320 buy-in and if it doesn't reach a $100,000 target, the $20 rake will be refunded to each player. In addition, if the target is met with at least 334 entrants participating, 888poker will increase the prize pool target the following week to $110,000.

The final tournament currently in the lobby is the Rake or Break Challenge at 7:35 p.m. GMT boasting a $109 buy-in. If the prize pool reaches the $25,000 target, the target will be increased to $27,500 the following week. If the target isn't met, every player in the tournament will be refunded the $9 paid in rake.

The tournaments can all be easily found in the poker lobby by heading to Tournaments and then Rake or Break.

It is great to see 888poker introduce new ways to give value to their players. If you would like to play in the Rake or Break tournaments or other amazing games at 888poker, you will obviously need an account. The great news is that thanks to the special relationship we enjoy with 888poker, we can offer you an amazing deal to help you get started.

Simply download 888poker through our links and you will be awarded an $88 bonus (£20 in the UK) without making a deposit. Once you are ready to make your first deposit, it will be matched in the form of a bonus up to $888, or more than twice as much as advertised on the site.