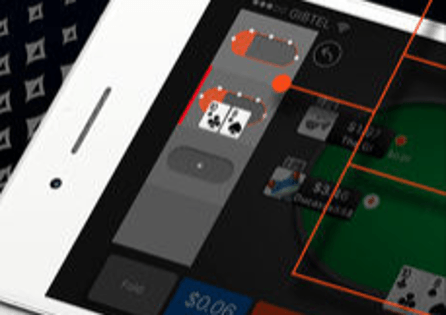 The PartyPoker NJ app has one feature that sets it apart from the other market rivals, which is the possibility to play poker cash games in portrait orientation.

While it might sound very simple at first, this allows the user to play using only one hand, which is a handy feature if you want to play a quick game on the go. On that same topic, the app now allows multitabling, and its users can play up to four games at once.

After a significant update in August and September 2019, the mobile version now has a much cleaner and modern interface while retaining its classic orange, white and black color scheme.

The update also added new graphics, sounds and animations, as well as some improvements to the poker software itself.

Another new feature from this update is PartyPoker’s in-game currency, Diamonds, which can be used for some acquisitions in the app.

Diamonds can be exchanged for rabbit hunting, emojis or for stuff to throw at the other players during a game in order to disrupt their concentration. Any player can earn PartyPoker Diamonds. Something really positive about the PartyPoker app is the social aspect, which includes a chat for players to interact during a game.

The PartyPoker mobile app is available to download and play on iOS and Android devices. For iOS phones, simply download and install directly from the App Store.

Your device will complete the installation, so the process is really straightforward. Android users will need to download the app from the PartyPoker site and install it manually, as Play Store does not allow real money online gambling apps.

It is a fairly simple process though, and the site also has a very handy guide on how to do it. The app uses geolocation technology to ensure that the players are in New Jersey. 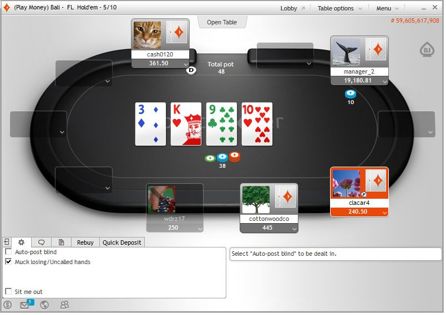 One of the biggest online poker sites in the world, PartyPoker has been part of the New Jersey poker market since 2013.

With plenty of experience in the online poker business, this trusted and famous brand has been around since 2001, which makes it one of the oldest in the world.

PartyPoker also has its own casino, PartyCasino, which is also available in NJ. In 2016, Bwin.Party Digital Entertainment, PartyPoker’s parent company, was acquired by gambling industry giant GVC Holdings.

PartyPoker NJ is part of the MGM-owned PartyPoker US network, which also includes Borgata poker and BetMGM poker.

Offering a good variety of games as well as multiple poker tournaments, PartyPoker NJ has daily competitions with varying entry fees, ranging from buy-ins that go as low as $0.25 up to  $525.

In June 2020, the PartyPoker hosted its first World Poker Tournament (WPT) Online Poker Open for the US Network.

For quite some time, PartyPoker led the NJ market, although it has since lost the top of the list to WSOP and 888.

That was largely thanks to its shared players' pool with sister sites Borgata and BetMGM. While it has decent traffic by New Jersey’s standard, the lack of shared liquidity with other states does hurt it a little bit.

PartyPoker NJ shares an integrated platform with PartyCasino, allowing players to use the same account for both sites.

The site is licensed by the New Jersey Division of Gaming Enforcement and has Borgata Hotel Casino & Spa as the land-based partner.

This bonus isn’t made available to the players immediately, however. Instead, it is split into 10 equal parts, which are released as the player accumulates bonus points.

Players will earn $1 for every 4 points they accumulate in PartyPoker games, and for every 8 points accumulated in the PartyCasino games.

The bonus expires after 60 days, which means that the users will have to accumulate all the necessary points within that specific timeframe if they want to use it.

Any winnings that originate from the deposit bonus are then made available for withdrawals immediately. You can also enter a bonus code if you have one. Applying a bonus code can give you additional cash.

Aside from the deposit bonus offer for new players, PartyPoker also has other bonus offers for regular users as well. Party Poker NJ has a loyalty program, which is open to all players. In order to qualify for it, the users must meet the necessary requirements.

The Party Poker NJ loyalty program is relatively simple and offers rewards based on points. Players earn 2 points for every $1 in tournament fees and table charges.

The loyalty program has four different levels, Bronze, Silver, Gold and Palladium. Players start at the bronze level, and progress to Silver by accumulating 50 points over the course of the month.

Gold requires 750 points per month, and Palladium requires 2,000 points. The benefits are tournament tickets and the option to redeem points for cash.

Each $1 you generate in rake or tournament fees gives you two points, and the more points you earn during a calendar month the higher up the VIP ladder you climb. The partypoker NJ VIP scheme has five tiers in total – four monthly and one quarterly tier – that you can see in the table below:

One of the oldest names in the online poker and online gambling industry, PartyPoker was launched in 2001 by the now-defunct PartyGaming.

It has always been among the largest online poker rooms in the world, building up brand recognition over the years.

PartyGaming was acquired by British giant GVC Holdings in 2016, five years after a merger with Bwin that led to the creation of Bwin.Party Digital Entertainment.

PartyPoker was available in the US until 2006, but it left the American market that year because of the Unlawful Internet Gambling Enforcement Act. After a seven-year period, PartyPoker made its return to the US in 2013.

After Governor Chris Christie signed online gambling into law on February 26, 2013, the first sites were launched later that year.

On November 21, 2013, PartyPoker NJ was among the first legal real money online gambling sites to go live in the Garden State.

Borgata Casino & Spa is PartyPoker’s land-based Atlantic City partner, which is a requirement in order to earn a license from the New Jersey Division of Gaming Enforcement.

Aside from its online poker rooms, PartyPoker also has an online casino, PartyCasino, which is also available for players in New Jersey.

PartyPoker NJ is also available to play on desktop, which requires you to download and install the PC app. In order to do so, visit the PartyPoker website and head to the download section. After that, run the program and just go through the steps to complete the installation process.

The desktop version has a simple interface, featuring the classic PartyPoker color scheme consisting of orange, white and black. It is also extremely easy to use thanks to this simple yet intuitive design.

This also helps it to run well even on older machines. With fairly simple specs, you won’t need a modern PC to run the PartyPoker desktop app.

After signing in, you will be taken to the lobby. Select the poker tab and then pick what kind of game you want to play from the options, which includes sit & go, poker tournaments and cash games as well.

The game screen has a very clean look, without unnecessary distractions.

Following the massive update to its mobile version in 2019, PartyPoker also introduced some of these changes to the desktop app as well in May 2020.

While the update was focused mainly on improving some functions rather than visible alterations, PartyPoker added the Diamond currency to the PC version.

Now, players can collect Diamonds both on their mobile and on their desktop, while the currency carries over from one device to the other. In June 2020, PartyPoker added emojis and throwing functions.

One of the PartyPoker’s distinguishing features is the number of cash game and sit & go tournament variations, such as fastforward cash games for Hold’em and Pot Limit Omaha.

Fastforward works just like a regular cash game, except that, rather than a fixed table, it has a multi-table format that allows players to fold multiple times and go to a new table instead.

Another popular variation is the exclusive PartyPoker SPINS sit & go. SPINS are three-handed sit & go with $5 buy-in tournament fees and random multipliers for the prize pool that range from 2 to 240,000 times the buy-in.

PartyPoker has an annual series of tournaments, featuring the Monster Series, Powerfest and Millions Online, which set the record in 2018 as the biggest single online poker tournament.

When it comes to the NJ online poker site market, dealing with a relatively small player traffic is usually a problem.

While NJ PartyPoker does have very good player traffic compared to the state’s standard, it still struggles a little bit.

That being said, you will still enjoy plenty of chances to play, which is also helped by its shared players pool with sister sites Borgata Poker and BetMGM Poker.

For a long time, PartyPoker was the online poker NJ market leader. However, its lack of shared liquidity with other states eventually dropped the site to second place, behind the 888 Holdings sites 888 poker NJ and WSOP NJ.

Despite this, PartyPoker still has a reasonably good player pool.

PartyPoker is licensed and regulated by the New Jersey Division of Gaming Enforcement, which means that it must follow strict rules in order to operate.

All poker games available to play at the site are also tested by the New Jersey authorities to ensure that they offer fair competition to all.