Choosing a World Series of Poker Main Event Starting Day: Does It Matter?

As Matthew Pitt showed us earlier this week in “Road to the 2016 WSOP: The 300-Day Grind Begins,” it’s never too early to start thinking about next year’s World Series of Poker Main Event. If you count your pennies — about 3,000 of them a day, which should keep you busy — you’ll have enough for the Main Event buy-in by next July, although you might want to put aside a little something extra for accommodations, travel, and ballin’.

When that time arrives, there will also come the perennial question: Which Day 1 flight should I play?

Assuming there will once again be three Day 1 flights from which to choose (as has been the case for the last four Main Events), there are some logistics involved when making the decision. If you play Day 1a, you get a couple extra days off before having to play again, but if you play Day 1c, you don’t need to be in Las Vegas as long.

However, one thing you don’t need to spend much time thinking about is whether you can pick up more chips on any particular starting day.

The graph below compares the field size for each entry day of the past five Main Events with information about the chip stacks of surviving players. The chip stacks are broken out into six categories showing the top and bottom 10%, and four quintile groups from 10% to 30%, 30% to Median (50%), Median to 70%, and 70% to 90%. (Click the pic to make bigger.) 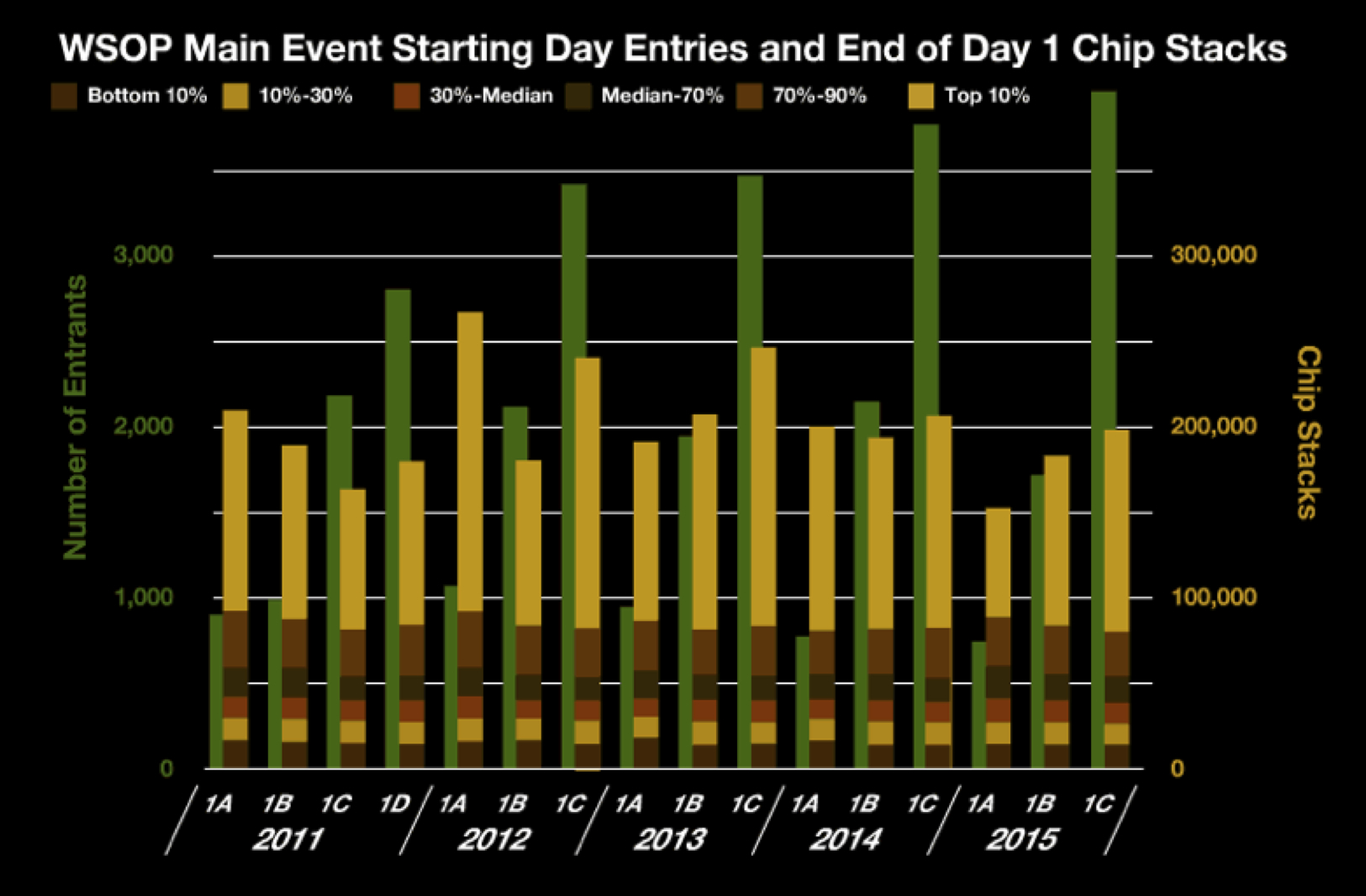 For most of the players who survive the first day, which Day 1 flight they chose doesn’t appear to have had much effect on their chip stack. The median stack (where half the players have more and half have less) across the 16 starting days varies between 38.5K and 41.9K, and even at the top end of the 70%-90% quintile there’s only a 12.2K variation over the last five years.

There’s no mathematical correlation between the number of entrants and the maximum chip stack, either. On a scale of -1.00 (inverse correlation) to 1.00 (total correlation), the relationship rates just 0.24.

Looking at the quintiles, there’s actually a strong inverse correlation (-0.82) with the median chip stack and the field size, though again, the overall variation is only about 10% of the starting stack, so that’s not exactly a significant effect.

The single largest Day 1 chip stack in the last five years was on a Day 1a, when William John raced out more than 100K ahead of his nearest challenger on that first Day 1 flight in 2012 to finish with 266,700. (Alas for John, he did not cash.)

But the trend (if you can call a trend after just three years) has been for the top 1a stack to be decreasing in size. Unless you’re in the top 10% of the surviving field, that’s really not anything to worry about.

What makes more of a difference to most of the field with regard to starting flights will be the number of players who make it through to Day 2.

That may not sound like a big difference, but if the same percentage of players had been knocked out of 2015’s Day 1c as were knocked out on Day 1a, that would have been another 233 players hitting the rail. (36.6% of Day 1a players were eliminated, while just 30.2% of Day 1c players were.) Even 2014’s small survivor differential between Day 1a and 1c (just 2.7%) meant an extra 103 players from the third Day 1 flight made Day 2. 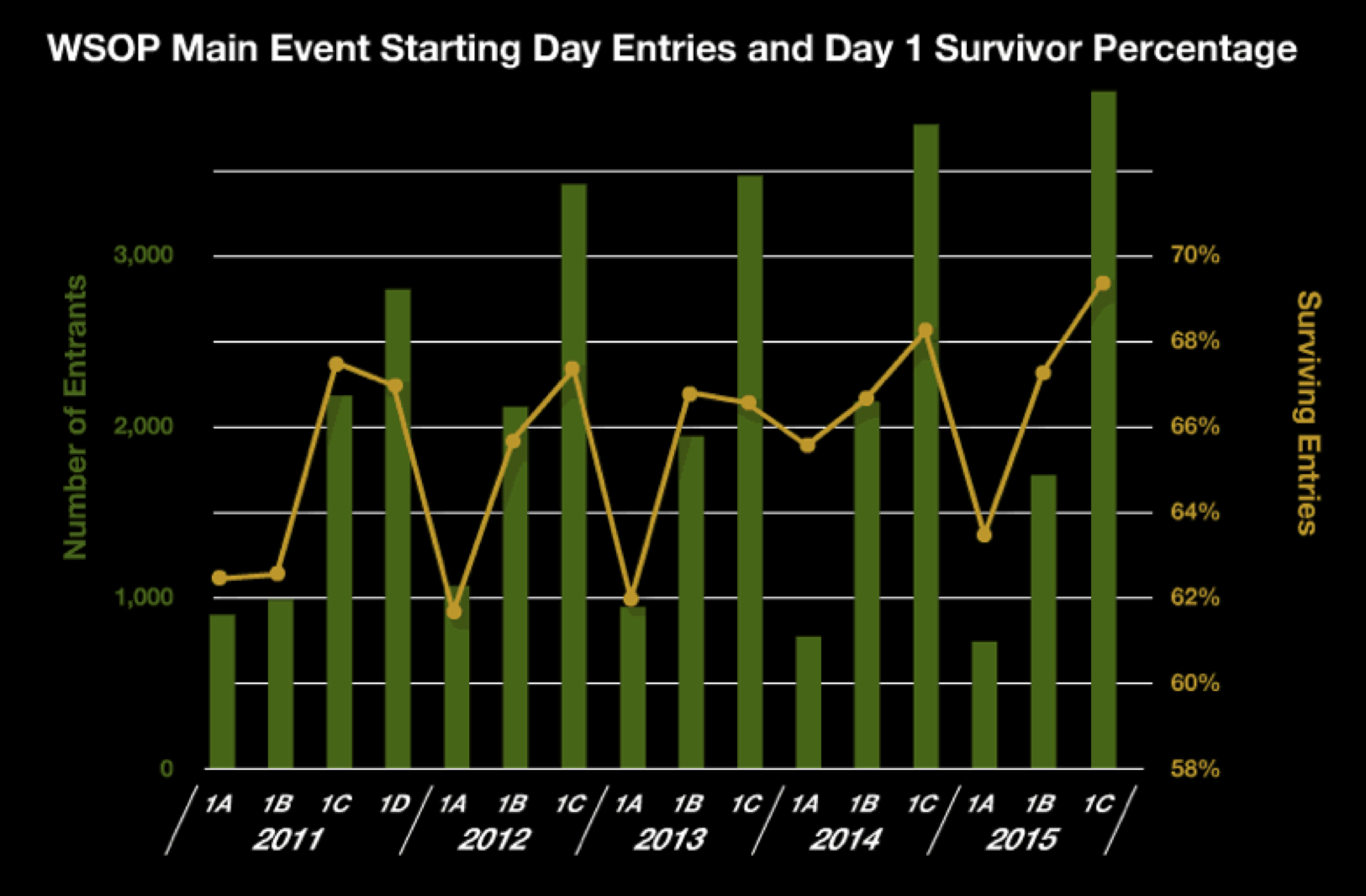 What causes this apparent correlation? Speculation on message boards around the beginning of the event each year is that Day 1a is populated by the wizards — i.e., pros who are already in Las Vegas for the WSOP, or others not pressured by time or money to minimize their expenses. If so, they’re busting out at a faster rate than the fields full of regular gals and guys taking a shot at the stars.

It’s possible that more variance at play in a field full of pros would account for a few extra percentage points of carnage. That’s not affecting the largest stacks much, though you can see a small increase in the mid-range stacks (30%-50% and 50%-70%). But without a lot more research, that’s a question we’re going to have to leave open for discussion.

Does Bagging the Chip Lead on Day 1 of the WSOP Main Event Translate Into Success?