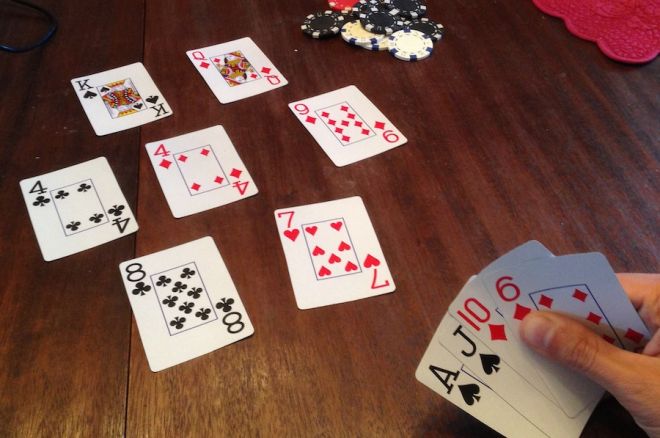 There are many home game variations of Omaha and hold’em — that is, games with community cards shared by all players — that are in a different array from the traditional five-card board. In this article, I want to share some of examples of such games, then in another we’ll delve into some related strategy considerations for these interesting home game variations.

For example, a game I played in the Bahamas, called Two by Four, had a board of four cards, dealt two at a time, for a total of only three betting rounds. Another game, called appropriately Double Omaha, has two rows of five dealt out as common cards, with players making their best high and best low hand using either the top or bottom row.

Another game, called Miami by many, has two flops, but just one turn and one river. Either flop may be used with the turn and the river card and two down cards to make the best high and the best low hand.

Still another common home game is called 2-1-3. The game is dealt like Omaha initially, with every player receiving four cards. The board, though, is completely different from Omaha. Two cards are dealt across. Underneath that one card is dealt. And then a final row of three cards is dealt. It looks like this:

There is a betting round after the hole cards are dealt, and then another round of betting after each of the successive rows is dealt.

A player makes either a horizontal or vertical combination of hole cards and board cards adding up to five cards to form the best high and best low hand, with the best high and low splitting the pot (with an 8-low needed to qualify for the low, as in Omaha hi-low).

You can imagine all sorts of variations on this game as well, such as 3-1-2, 3-3-3 (called Cube for obvious reasons), and even 4-4-4 (called Big Cube). There are also variations of these games in which five hole cards or even six hole cards are dealt.

The five- and six-card variations add another twist to the already great expansion of possible hand combinations. They sometimes allow the player to use, in addition to all of the vertical and horizontal combinations described above, only the hole cards when making a hand. So, for example, if a player were dealt a perfect low among the cards in his hand, in this version of the game, the player could use only those five cards, ignore the board entirely, and have the best low.

Another fairly common home game variation is to deal either six or eight cards in a circle, and allow players to combine two hole cards with three cards in succession on the board to make their best five-card combination. So for example, the cards would be arranged as follows:

Or a similar game with:

The dealer reveals the down cards two at a time, turning cards that are opposite each other across the circle. When I’ve played this game we called it, uncreatively, The Circle Game. We sometimes have added a card in the middle that serves as a third card connecting to any two adjacent cards. (This variation is known as The Circle Game with a Piddle in the Middle).

So, for example, if a player held

as hole cards, and the board was as follows:

The player could use

to make a flush (better than the

to make a straight) and use his

There are many other arrays that I’ve seen in home games. Some provide for “floating cards” that connect two rows, much like the middle card can connect adjacent cards in The Circle Game. I play this variation regularly. It’s called Elevator.

Each player is dealt four cards. He may use two or three from his hand in combination with any two-card or three-card vertical row from the following array, with the middle card able to “float” to provide the fifth card of the combination:

In the example above, a player could combine his hole cards of

with the board above for all sorts of combinations. Here are a few:

He could take his

, combine them with the second row of

and have quad sixes. For his best low hand he could take his

and combine them with the “floater”

and right-most row (the

Typically, in this game the pot is split between the best high and low hands. But there are other split pot versions as well. One splits the pot between the high hand and the player who has the card of the next higher rank of the suit of the “floater” card. So in the above example, if someone held the

, the pot would be awarded to the player nearest to the

There are triangle arrays as well, with three cards on the bottom row, two in the middle row and one on top. Players need to use one card from each row and two from their hand in making their best five-card hand. Of course, there are as many possible versions of the board as one can imagine.

That covers some of the many variations of flop games with non-standard board arrays. In my next article, I’ll delve into some of the strategy considerations for these games.