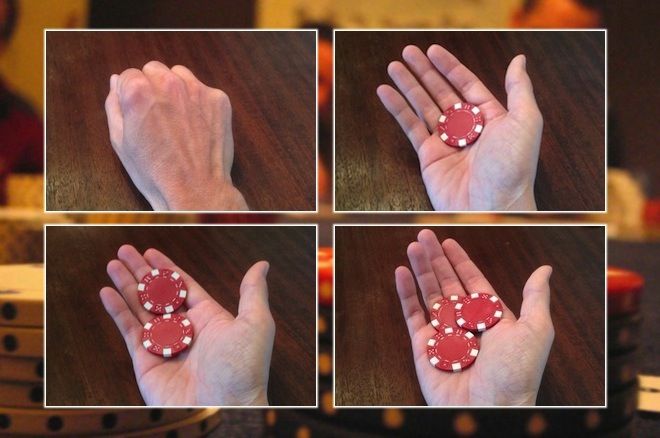 In my last column on the home game variant of Boston Stud, I promised I’d writing something about another of my favorite home poker games, seven-card stud hi-low declare. The truth is, one could write an entire book on this game, it is full of so many interesting and potentially complicated situations.

First of all, recognize that this is a “declare” game. For simplicity’s sake, we are here going to consider only simultaneous declare versions (as opposed to sequential declare), meaning everyone declares at the same time. Let’s look first at how the declare is made and how it affects strategy in general. Then we’ll look at a specific hand situation to see how it plays out.

Once the betting on the final card is done, the players then declare whether they are playing for the low, for the high, or for both. The declaration of how they are playing their hand is made simultaneously with players placing chips in their hands and showing them at the same time — one chip for low, two chips for high, and three chips for both.

It should also be pointed out that in some variations of this game there is one more betting round after the declare. This can work in a limit game, where betting on the end is only a small percentage of the pot, though it generally doesn’t make sense in a no-limit or pot-limit game. Allowing a final enormous bet, when one player may be assured of winning half of the pot, can often result in at least one player losing an entire stack in almost every hand — which can spell doom for the home game, especially if it’s early in the evening.

Games played with a “declare” differ significantly from other hi-low games we have considered — that is, games played “cards speak.” With the declare variation, the player has to decide and announce whether he’s going for the high, low, or both, whereas in cards speak games he automatically competes for both. Here the player may compete for both and declare that intention, but in doing so the player must either win or tie both the high and the low end of the hand or he loses all.

As you can probably imagine, adding the declare element into a hi-low game changes it considerably. It adds an entire new level of possible deception, and with it a greater degree of skill. A player must assess, and then exploit not just how high and low hands are likely to stack up against opponents’ hands, but how hands appear to be either high or low. Similarly, a player may use bets to reinforce the image of a hand likely to go high or low — further complicating opponents’ decisions of how to declare their hands.

Imagine the following heads-up situation in a game of seven-card stud hi-low declare (we’re playing without the eight-or-better qualifier for a low):

In this hand, Player B led the betting on third street (with the ace up) and Player A called. At that stage, player A didn’t have any idea whether Player B was going high or low, since an ace may indicate a high hand or a low hand (or both).

On the next card, when Player B bets with

showing, Player A almost surely must put the player on a high hand, since a king would be a terrible low card against Player A if Player B was starting with three low cards. Player A then has a huge advantage, insofar as his hand looks like a low hand — with the

exposed — while it is actually an excellent high hand with trip fives.

Player A knows that he will almost surely be able to win at least half the pot by declaring low (if he gauges Player B’s hand by the end to have improved to a flush or full house against his trip fives). But he also knows that he has a chance of scooping the pot (the ideal goal in every hi-low hand) if he improves to a full house against his opponent’s straight, flush, or trips — and if Player B, assuming Player A is going low, declares high against him.

In cards speak versions of hi-low, the best strategy is often to start out going for the low (modified somewhat for cards speak versions with a qualifier for low, such as stud and Omaha are usually played in a casino). In the declare version there is still a general strategic reason to start with a hand that has a shot to win the low, but the overriding consideration is often built on how a hand looks to opponents, in addition to its relative strength versus how you assess your opponent will declare. That’s a fairly complicated consideration, making declare games excellent places for highly skilled players to exploit their opponents.

Next time I will look at a specific seven-card stud hi-low declare game, thinking through decisions each player will have to make as the hand progresses. In this way, I’ll show you how to consider the value of a hand as it develops in these declare games, as well as how to use your betting action to shape and exploit the image of your hand.