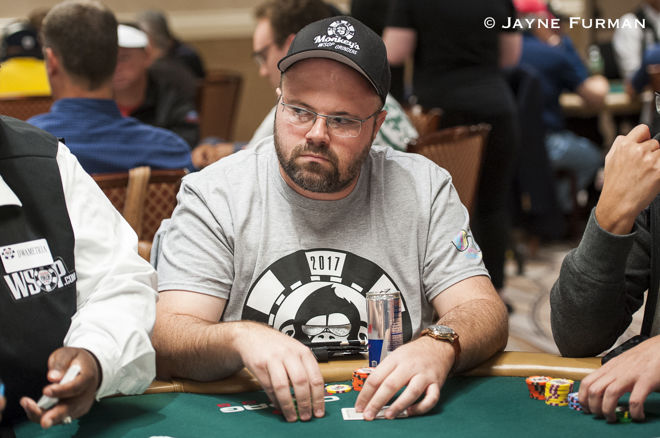 When Benton Blakeman first played the WSOP Main Event in 2012, he psyched himself out by thinking about the tournament's enormity. Many first-timers do.

"I was always worried about my own financial investment as well as the investment of the people who I sold shares to," the Las Vegas-based poker pro said. After he failed to cash in 2012 and 2013, he reminded himself: This is just another day of work. Armed with a fresh outlook, Blakeman finished 282nd for $38,684 in 2014 and cashed again last year for $17,232.

A poker pro since 2004, Blakeman specializes in the Bellagio's deep-stacked $5/$10 and $10/$20 no-limit cash games. This summer he played in four WSOP preliminary events, cashed in three, and yesterday entered his sixth Main Event in a row as a member of Monkey's Minions, a staking group run by Will "Monkey" Souther. (You can read more about "The Wondrous Tale of Monkey's Minions" here.)

Blakeman actually chose yesterday's starting flight partly because of superstition, as both of his previous cashes came when he played Day 1. But he also did so because, in his words, "Day 1B also has a field with a good mix of amateurs and professionals and it's not nearly as chaotic as Day 1C during breaks."

For Blakeman, who grew up in Thibodaux, Louisiana, the WSOP offers a home court advantage thanks to his wife Kim and their six-year-old son Brayden.

"Living in Vegas is great during the Main," Blakeman said. "I don't feel like I'm out here alone. I can run home during dinner break, have a home-cooked meal, and give my wife and son a hug before going back. I think that helps a lot."

Blakeman's support system also includes his parents, who live in Louisiana; his mentor David, whose life and bankroll management advice has prepared Blakeman for the gambling world; and his close friend Joe Tehan, who has a World Poker Tour title and over $4 million in live cashes.

"No one has influenced my poker game more than Joe," Blakeman said.

He's also part of the poker texting group that thanks to popular vlogger Andrew Neeme has become well known across Vegas. "Mostly we joke around," Blakeman said, "but the group is always there to discuss hands and get different perspectives."

How does a successful pro navigate his way through Day 1 the Main Event? Let's take a look.

Having a Game Plan

In the early stages, Blakeman planned to assess his table and rely on his experience in deep-stacked cash games.

"I will practice patience and good hand selection, especially in the early pre-ante levels, and play my positional advantages as often as I can," he said before yesterday's start.

"As I get familiar with the table I will start to exploit my edges if someone isn't peeling three-bets when they should because of stack depth, or folding the big blind too much to 2.5x opens. Overall, I just pretend I'm in my normal Bellagio cash game."

Blakeman took his place at Table 27 inside the Amazon Room and got to work.

on the button, and Gruneburg called.

After his opponent checked, Blakeman bet 1,000 on the

flop and was called. On the

turn, Gruneberg check-called Blakeman's 2,700 bet, and the pair saw the

land on the river.

"He's gonna show up with a pretty tight range of king-queen or better by the river," Blakeman said. "I wanted to get value from king-queen, ace-queen, king-king, which are his most likely holdings."

He bet 6,200, and Gruneberg called and mucked. "Obviously it was a dream runout for me," Blakeman added.

Of course, playing in the Main Event doesn't only involve value-betting aces on favorable runouts. During the second level (150/300), Blakeman held

flop. Action checked to Blakeman in the cutoff who also checked, and Takao Shimizu bet 900 from the button. It folded around to Blakeman who called, then the

"He should never have an eight," Blakeman explained, "and I have a ton of them when I check-call."

After Shimizu called, Blakeman bet 3,200 on the

. "Pretty bad turn call by him when I have a distinct range advantage on the turn and he has to call a pot-sized bet with nine-high," Blakeman said.

"I'm getting 4-to-1 to call and only need about 20 percent equity to continue," Blakeman said. "And the

is pretty nice because I have a three-card ladder draw (

) and I block my opponent from having queen-jack and king-jack. For these reasons, I called."

turn and Blakeman pondered his options. "While it would be pretty standard for me to check back here, I've seen him call somewhat light, plus I think I have an easy fold versus a check raise and I can check back rivers," he said. "So I decided to bet 3,700 for value and hopefully set my showdown price."

Alley called, both players checked the river, and Blakeman's pair of jacks was enough to beat his opponent's two tens.

-offsuit, Shimizu called next to act, and the rest of the table folded. Then on the

"[Shimizu] is super sticky, plus he doesn't believe me," Blakeman said. "So I'm going to bet tiny with draws and size up with value, because he won't adjust correctly." After Shimizu called the flop, Blakeman bet 3,200 on the

turn and his opponent called again.

. While Blakeman conceded that Shimizu might have a nine, "it's more likely that he has a king-queen or king-jack hand, or he'll just say 'YOLO' and call down with jack-ten, queen-ten, or a pair-plus-draw hand."

As a result, Blakeman decided to value bet 7,300 and fold to aggression. "If [Shimizu] raises I'm always toast," he said, "because he bets big when bluffing but hadn't bluff-raised."

Shimizu called, mucked his hand, and Blakeman's stack grew to over 80,000.

Battling for a Bag

In the final level of the night, Zach Gruneberg raised from middle position to 1,200 and Blakeman just called from the big blind with

and 80,000 effective. "I decided to flat to keep his range wide," he explained, "and my perceived range is gonna be pretty loose because I defend the big blind light."

turn, then considered his options on the

so I'm not terribly worried about backdoor flush," Blakeman explained. "But I think he'll check back a jack a lot because of the backdoor flush coming in. So I led 6,400."

to win the pot with his turned gutshot straight.

After a long day, Blakeman bagged 59,700 chips and reflected on his performance.

"I'm happy that I get to play a game for a living. And I'm happy to still be in the Main Event. Six Mains in a row and seven total, and I've never busted on Day 1. Some people dream of just getting to play the Main Event once. I get to do it every year. So yeah, I'm happy."

I’ll Be Bach: Breaking Down Seven-Card Stud with David Bach