Going Deep in the Rio Daily Deepstacks at the 2017 WSOP 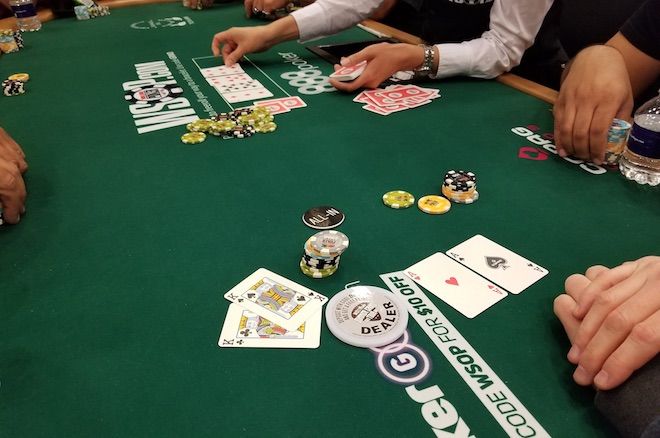 With the 2017 World Series of Poker winding down, the Daily Deepstacks at the Rio All-Suite Hotel and Casino remain an affordable option for players looking to earn a big score. Although no bracelets are awarded in these events, many consider these one-day tournaments to be among the best value in Las Vegas, offering top prizes well into five figures. Just last week, for instance, Raymond Kilpatrick won $32,498 for beating a field of 1,016 entrants.

Here's the schedule for the Rio's Daily Deepstacks:

For the first few hours, the Deepstacks are exactly as advertised. In the 2 p.m. tournament, a modest $235 buy-in gets you 15,000 starting chips and plenty of deep-stacked play. By the sixth or seventh 30-minute level, however, the increased blinds turn the action into a short-stacked shovefest. How can you expect to go deep in a tournament of this size and structure?

In the words of "Wild Bill" Phillips, who chopped a Deepstacks tournament last year: "Run like fire." That's good advice.

Putting the importance of running good aside, it's important to keep two things in mind when playing the Daily Deepstacks (or any low buy-in tournament with a fast structure):

While it's true that Greg Raymer, Chris Moneymaker, and other savvy pros have competed in the Deepstacks, you can expect more frequently to play against largely recreational opponents whose ranges are heavily weighted — or "unbalanced" — to specific types of hands.

These players tend to fold weak hands. They limp decent hands. They raise strong hands. They reraise monsters. In short, they play in a straightforward manner that leaves them open to exploitation.

In response, you should play extremely tight in some spots and extremely loose in others. And you should revise your adjustments based on new information. If someone reraises weak hands or limps with monsters, for instance, how might that change your strategy? Stay flexible.

Let's look at a few examples that focus on that crucial 7-25 BB stack depth that's common in the Deepstacks.

A player raises to 2,000 from early position and action folds to you with

on the button. You've previously seen him limp-call and limp-fold. What's your play?

With 25 big blinds, you can't call a raise of 2-3 BBs with a small pocket pair for set value alone. Not only do you need to hit your set, which is about 8.5-to-1 against, but your opponent also needs to make a hand that's strong enough to commit his stack but not strong enough to beat your set. Unless you have a strong reason to believe that you can outplay your opponent postflop — which is difficult given stack depths — calling is probably a poor decision.

Three-bet shoving is also dicey, and the reason isn't only because your opponent raised from early position. It's also because you've seen him limp preflop (and passively call and fold). Small and middling pairs, Broadways, and suited connectors — all hands that might fold to a shove — aren't being raised in the first place. Your opponent is limping them instead. This, in turn, makes his raising range even stronger. Facing an equity disadvantage and not much fold equity, shoving two sixes is probably a break-even or slightly losing play.

Folding isn't ideal, but it's probably the best of three marginal options.

Action folds to the small blind, a middle-aged man new to the table, who limps in. You have

in the big blind. What's your play?

Without specific reads, you should consider the population tendencies of players in the Daily Deepstacks (or any low-stakes tournament). In general, these players tend to be straightforward and unbalanced. They fold bad hands, raise strong hands, and limp marginal hands.

Given this assumption and 15 big blinds, you should shove all in and expect the small blind to fold well over 80 percent of the time. In the rare instance you're called by, say,

, you'll still win about 25 percent of the time. The combination of fold equity and pot equity makes this spot a profitable shove with any two cards.

Action folds to the button, a big stack with about 1.2 million chips, who minraises to 40,000. You have

As we saw in Hand One, it's usually a bad idea to flat-call with shallow stacks. You'll miss the flop around two-thirds of the time, you don't have implied odds, and you'll be forced to fold on the flop without seeing all five cards. In this situation, though, a few factors argue for a call.

First, you're getting fantastic pot odds — over 4-to-1 — and are closing the action preflop. Even if you lose most of the time, a preflop call will be profitable.

Second, you don't have a short stack. You have a super-short stack, which can actually work in your favor. With 20 big blinds or more, calling with a hand like

from the big blind is problematic. If the the flop comes

, for instance, you might call a bet because you have a pair. But if your opponent bets again on a blank turn card, you have to fold. Deeper stacks prevented you from seeing all five cards and realizing your equity.

With only seven big blinds, you'll get to see all five cards if you hit any piece of the flop and commit your stack. At the same time, you can save your last few BBs by check-folding when the flop is

Consider calling the min-raise and shoving all in on favorable flops.

under the gun. What's your play?

With 18 big blinds, it might be tempting to limp, min-raise, or fold and "wait for a better spot." But no. With this stack size and this particular hand, you should strongly consider shoving all in.

Jamming does a much better job of denying equity than limping or min-raising. Your opponents might fold hands as good as

, which is a great result. If you min-raise or limp, on the other hand, they might shove on you, which puts you in a terrible spot with a hand as good as a suited ace.

It's also worth remembering the tournament's top-heavy payout structure. The Daily Deepstacks pay the top 15 percent of players, with a min-cash worth a measly 1.5 times the buy-in. Because the lion's share of the payouts is at the final table, you should take every profitable spot — even marginal ones — in order to put yourself in a commanding position. Don't worry about laddering up the payouts until you reach the final table. Play to win.

What Inspired You to Get Into Poker?