One Weird Trick For Instantly Recovering From a Bad Beat 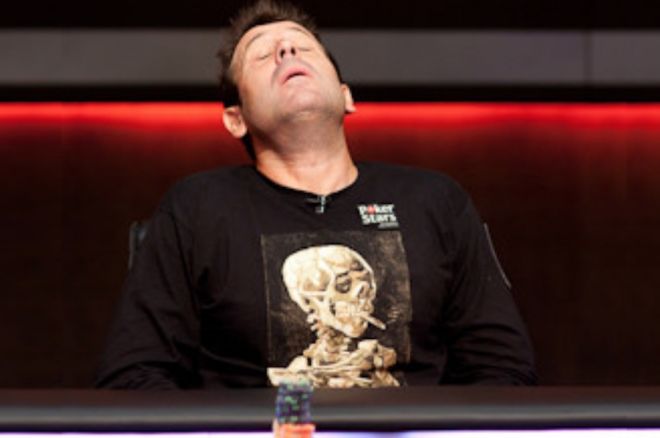 I’m aware that the “one weird trick” headline has become so overused as click-bait that it’s now basically a parody of itself. I chose it here not only as a little self-deprecating humor — what kind of desperate writer actually resorts to such a lame headline, right? — but because, for what I think is the only time in my history of writing about poker, it actually captures my subject well.

A few weeks ago, I was playing in a home game that I attend semi-regularly. I managed to trap another player with a small flopped set to her overpair aces. All the money went in, and I was sitting pretty — until she caught her two-outer on the river.

I’ve written previously about what I have found to be the most effective way of mentally recovering from a bad beat — namely, to begin thinking about the next hand. I stand by that.

However, sometimes I find that it’s hard to start that process unless I do something quickly to soothe the emotional sting of the big loss first. It’s hard to think rationally while your psychic pain is demanding your attention.

Here’s the key phrase that I’ve found immediately shuts down the hurt: “Well, that was unfortunate.”

Really, that’s all it takes in most cases. It’s like discharging an emotional fire extinguisher right at the source of the pain — it’s out in an instant.

This phrase just popped into my brain some years ago after an online bad beat in a crucial tournament situation. I was surprised at how it dissipated my irritation. Today I still find it just as effective as it was that first time.

I’ve had a lot of time since then to ponder what makes it so powerful at blowing out the flame of a bad beat. I believe it’s a combination of the subconscious effects of all four words.

“Well” is the least important of them, but it still serves a function. It signals resignation — not in the sense of giving up, but in the sense of accepting the reality of an unpleasant situation.

“That” looks like a basically content-free word at first glance, but is actually, I think, key to the whole thing. “That” refers to the incident, the thing that just happened. What’s so significant about that? It depersonalizes it. It shifts the emphasis away from self-defeating thoughts such as, “I run worse than anybody else that plays poker” or “I can never catch a break.”

Equally, it shifts the emphasis away from angry thoughts directed at others, such as, “That guy was such an idiot to call,” or “This dealer always screws me.” All that happened was that a card came off the deck. Nothing was done to me; nothing was done by the dealer or another player. “That” simply happened — a thing of no intrinsic moral or emotional meaning.

“Was.” The verb tense here makes a big difference. You can’t say, “Well, that is unfortunate,” because it’s no longer happening.

It’s not an ongoing tragedy — it’s already in the unchangeable past. What’s done cannot be undone. No use crying over spilled milk. It’s time to move on.

“Unfortunate.” By dictionary definitions, unfortunate and unlucky are virtually interchangeable synonyms. But in actual practice, I think we tend to use them slightly differently most of the time. We tend to think of people as “unlucky,” but events as “unfortunate.” It was unfortunate that a tornado touched down in that town; Farmer Jones was unlucky that it hit his barn.

It’s not a strict distinction, but it’s common enough that I find it makes a difference if my self-soothing phrase uses unfortunate rather than unlucky, because they seem to have different emotional baggage. Again, it’s a depersonalization thing. I don’t want to think that I am unlucky, because that sounds and feels like a trait that I’m stuck with. Instead, I want to label the event as having been unfortunate — because it was. It was unfortunate, but now it’s in the past, and it need not continue to affect me.

My experience is that reciting this one simple phrase to myself has a large and instantaneous effect on resetting my emotional state. It prepares me for the next task, which is the heavier mental lifting of starting to think about the next hand, and what factors in the game have now changed that I need to take into strategic consideration.

Say it to yourself now a few times now, just to kind of ingrain it into your thoughts. Then try to recall it to mind actively the next time you’re the recipient of a bad beat: “Well, that was unfortunate.” See if it doesn’t help ease the sting of the loss, and help you calm your mind for the rest of the session.

If you find it useful, just remember where you learned this one weird trick.

Revealed: The Single Best Way to Recover from a Bad Beat