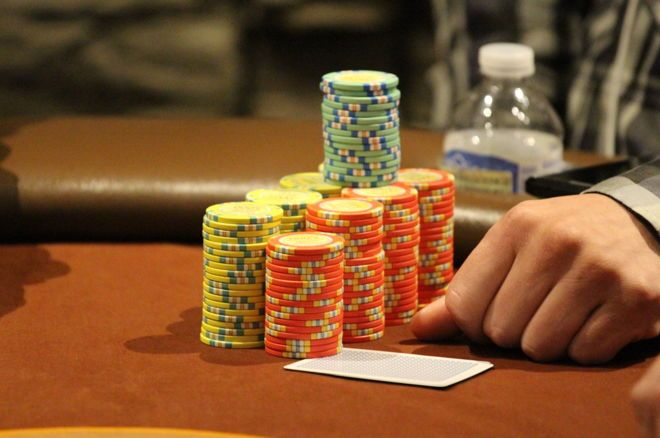 Only around the top 5 percent of starting hands in poker are favorites to be the best hand on the flop. This range primarily consists of big pairs and big

Maybe another 5 percent of hands are favorites to flop so much equity that you are indifferent to getting called when you continuation bet. This range consists primarily of Broadway hands, mostly suited, that often flop good pairs and/or some sort of combo draw.

That adds up to only around 10 percent of hands with which you are consistently happy to continue beyond the flop. With the other 90 percent of hands, you are usually happy to get a fold, especially late in tournaments where stacks get so short that every pot represents a substantial percentage of your stack.

Getting these folds can be tough to do in small stakes tournaments that are mostly populated by players who make frequent calling mistakes. However, the good news is that the calling mistakes these players make early in a hand often lead to folding mistakes later in a hand.

Some of them will defend the big blind with a wide range and fold on the flop when they miss. Others will call all the way down to the river with weak hands and only fold if you put them all in.

The latter group is tough to play against because you have to risk your whole stack to get them off of a hand. This can be difficult to do when you have limited chips deep in a tournament, so it's best to pick on players who you can bet out of the pot for a smaller percentage of your stack.

In my experience, following this "path of least resistance" generally means focusing on the following types of opponents.

1. Players who do not defend their big blinds well

Weak players in the big blind are the best targets for stealing pots. Some still fold too many hands to a minimum raise. Others have learned that they should not fold due to pot odds, so they call without much of a plan. Many of them repeat this mistake on the flop which leaves them in even deeper troubled waters on the turn.

This makes them vulnerable to a barrel on a lot of cards and I usually get them to fold at this point if I pick my spots well. They are generally too passive postflop which often results in them losing more by defending too wide preflop than they would have by being too tight.

This is a great spot when you can get it, but small stakes opponents are notorious for ruining this plan by calling your opens too often in position which causes many pots to go multi-way. Sure they have wide, exploitable ranges, but it can be too expensive to try and get three or four players off of their weak holdings. Instead, I will look for the next path of least resistance.

2. Players who do not defend their c-bets well

This path turns the last one on its head. It presents itself when I defend my big blind against a player whom I suspect is opening with a wide range of hands.

In small stakes tournaments, these players usually do not have sound c-betting strategies. They know they are supposed to raise wide from late position and c-bet often, but they generally do so way too often. This makes them susceptible to check-raises on flops that are better for the big blind defender's range. Essentially, I do to them what I hope they do not do to me when I go after their big blinds.

Like before, this can get too expensive in bloated multi-way pots because the size of my check-raise is tethered to the size of the pot. Also, if another player called the c-bet, then he may be more likely than the original raiser to call my check raise. If this seems to be the case, I will abandon ship and look for a cheaper source of chips.

3. Players who do not defend against three-bets well

If you play small stakes tournaments, I'm sure you've noticed that the first two paths of least resistance are often blocked by players who frequently smooth call opens and create multi-way pots. The best way to avoid this is to three-bet loose openers in order to shut out the players behind.

This is a great strategy against players who fold to three-bets, but it can get expensive against those who call them too often. Many recreational players want to see a flop at all costs, so this happens way more often than it should. For this reason, I usually only go for this one when stacks are deep enough that I can fire a c-bet and turn barrel without committing myself to the pot.

The best option is to min-raise and take it down preflop. That almost never worked in my games, so I started using a larger opening size. This severely cut down on the number of times I got called or three-bet preflop.

The next best option is getting called by the big blind and forcing him off of his hand on the flop or turn. I personally love the triple-barrel bluff-shove on the river, but if I am picking my spots well, they usually fold before it gets to that point, so I rarely have to use it.

That said, sometimes you have a tough table where you simply cannot force people off of their hands for less than your whole stack. Maybe your only options are to go for triple-barrel bluff-shoves, three-bet shoves, or open-shoves. All these plays can be profitable, and they damn well better be since you are betting the farm.

You can increase your chances of success by making these shoves from late position so that you only have to get through a few opponents, and also making sure you have more than enough fold equity. Other than that, there isn't much you can do to control the result once you've made the decision to go all in.

That leads me to my final point. For this reason, the decision to shove should be a last resort. In my experience, better options can often be found in small stakes tournaments if you look for them before you get too short-stacked. But if an all-or-nothing spot truly is the only option, then you have to take it.

However, if a shove spot seems slightly good, but you know that the table is such that you will very likely get other profitable spots that don't require you to bet everything, you should consider taking the path of least resistance. You're not playing the player, but the table as a whole. Attack the weakest links.

How to Pick a Winning Slot Machine (As a US Player)