A King On The River Sends Frankenberger Wild

Today was a pretty fantastic day at the World Series of Poker. This final table was one of the most magnificent final tables we have had this year, and it produced a great heads-up encounter that drew crowds around the rail the likes of which we have not seen at this years WSOP. And that was just half of the early-morning buzz inside the Rio.

Our heads-up finale was fought out between arguably the world's greatest poker player and eight time WSOP bracelet holder, Phil Ivey, and fellow member of the WSOP bracelet club, Andy Frankenberger. In the end, Frankenberger spoiled the Ivey party with a quite powerful heads-up performance to take his second WSOP bracelet in as many years.

Three days ago, 179 players turned up to buy a ticket to the $10,000 Pot-Limit Hold'em extravaganza. At 1:00 PM this afternoon, the Amazon Room came to life as the final 17 players strolled back into the ropes to play for the bracelet.

Cary Katz (who'll you'll see again in The Big One For One Drop) came into Day 3 as the shortest stack left, and he wasted no time getting it all in. He was dealt

on the very first hand, but he ran his two Broadway cards smack into the pocket aces of Steve Landfish. It was a fine start for the latter, but Katz was sent to the rail to mark the end of his one-hand work day.

David Benyamine was short on chips when he fell in 16th place, the victim of a three-outer. Shaun Deeb won a flip against Chris Klodnicki to send him off in 15th place, and he was followed to the cashier by Patrick Cronin. Cronin had an unenviable final day to his event. He was three-outed twice in the early going, then got the remainder of his short stack in with a dominated hand. He earned more than $28,000 as a consolation prize.

Jeff Tims lost a flip to bow out in 13th place, and we lost a real contender in 12th. Antonio Esfandiari was working on his fourth cash of this young WSOP and looking for his second career gold bracelet. His first came in pot-limit hold'em, but he could not escape the perils of the early levels today. "The Magician" three-bet Manuel Bevand two hands in a row, and the first one got through. Bevand four-bet shoved the second time, though, and Esfandiari's pocket fours could not out-race Bevand's king-queen. Esfandiari had been lively and chatty for the duration of the event, and his exit cleared a few spaces in the bleachers as his fans followed him out the door.

Despite coming into the day with the chip lead, Steve Landfish could not work his way to another $10,000 final table. He had two of those last year, but this time around, he'd have to settle for an 11th-place cash after Shaun Deeb sent him on his way. That brought the field down to just one table of ten, and they were relocated to the main ESPN stage.

Ten-handed play lingered for a couple levels as a couple players doubled up. Ryan Julius could not accomplish that feat, though, and he was the one run out as the final table bubble boy. Julius got his short stack in bad with

against Manuel Bevand's two nines, and he could not overcome them. The final table was set, and it would prove to be a damn good one.

WSOP stalwart and double bracelet winner, Hoyt Corkins brought his trusty cigar to the final table, but his stay would be the shortest one. Corkins three-bet shoved with pocket nines, and Bevand won a flip with ace-jack to send the Cowboy pacing off into the distance.

They were eight-handed for a long while before Daniel Weinman met his demise. Weinman shoved in with

were too much to overcome.

Next to fall was Canada's Matt Marafioti, who finished runner-up in this event in 2010. Marafioti found himself nearly all in with

of Eslami. A king flopped to all but end Marafioti's day, and he lost his last 15,000 chips on the next hand to depart in seventh place.

Six remained, and one of them was Shaun Deeb. He had a more volatile event than anyone else in the field, going back and forth between chip leader and short stack like a yo-yo. He was almost felted early in the day, but he recovered well to find himself healthy with one hand before the dinner break. On that hand, though, Deeb got himself all in and flipping a coin for his tournament life. It was the most dramatic hand of the tournament, too. Andy Frankenberger flopped a set with his pocket sixes, but Deeb's

had outs on the

ripped right off on the turn to give Deeb Broadway, but it paired again with the

river to give the pot back to Frankenberger. His full house was the hand that sent Deeb packing, and it seems like it's only a matter of time before he earns a bracelet. Today was not the day.

So, just five players returned from the dinner break, and Manuel Bevand was leading the way. That would not last long. He had been worked all the way down around 800,000 when another huge pot broke out involving Frankenberger. The latter got all his own chips in with

, and Bevand was content to flip for the knockout with

. The flop was blank, but the

on the turn cued a big celebration from Frankenberger. Bevand was eliminated on the next hand, and Frankenberger was suddenly in contention and a real threat to take the title.

So we were down to four-handed play and the next player to be culled was Alexander Venovski. As per usual at this stage of the tournament it came down to a flip and the benefactor was Phil Ivey. The pocket sevens of Ivey standing strong against the ace-queen of Venovski and we were down to a menage a trois.

When we went three-handed it was Andy Frankenberger with all of the work to do. He started as the short stack with just 8bb but fought like a lion. Frankenberger really turned it on and in the end it was Ali Eslami who was eliminated in third place after losing a flip to Phil Ivey. This time Ivey found

of Eslami and we were heads up with neck-and-neck stacks.

The heads-up battle drew one of the biggest crowds that the Amazon has seen this year as players and fans aliked flocked to see if Phil Ivey could create a dream story of nine WSOP bracelets. But today was not to be a Phil Ivey day. Today was an Andy Frankenberger day. Considering he was up against the greatest player in the world Frankenberger's victory was a wonderful moment for the former stocks trader. The final hand came on a board of

for top pair and Ivey holding

for the draw. The draw never came in, and Frankenberger was suddenly getting himself ready for a hell of a lot of photographs!

If you're a fan of poker and haven't read the coverage, it's worth a look back. Our congratulations go out to Andy Frankenberger tonight, and our thanks go to the entire final table for such a captivating display of the game we love.

Andy Frankenberger raised to 300,000 and Phil Ivey made the call. The flop was

, Ivey checked, Frankenberger bet 130,000, Ivey raised pot and Frankenberger called faster than a bolt of lightning strikes the earth. This was going to be the bracelet defining pot everyone is waiting for and this place is packed to the rafters.

for the open ended straight draw and Frankenberger turned over

for top pair. Andy Frankenberger was about to win his second World Series of Poker (WSOP) bracelet in consecutive years.

One more card to fade and Frankenberger was going to be our champion.

That's it! Frankenberger has not only won his second WSOP bracelet and $445,899, he has done so by beating the greatest poker player alive today. Frankenberger has his critics but what are they saying now? What a feat for Frankenberger and commiserations to Ivey who played like a champion throughout. He leaves with $275,559.

Long Dwell For Ivey But He Gets It Wrong

Andy Frankenberger raised to 300,000 and Phil Ivey called. The flop was

, Ivey checked and Frankenberger quickly bet 600,000 to win the pot.

Ivey raised to 240,000 and Frankenberger made the call. The dealer gave us the

, Frankenberger checked, Ivey bet 240,000 and Frankenberger went deep into his stack but when he came out, only made the call. The

made an appearance on fourth street, Frankenberger checked, Ivey checked and we were at the river. The

finished off proceedings and Frankenberger bet 450,000. Pressure on Ivey - who had been making all the right decisions in these spots - and he glared at Frankenberger for an eternity before making the call. Frankenberger turned over

for the straight and took down another nice pot. 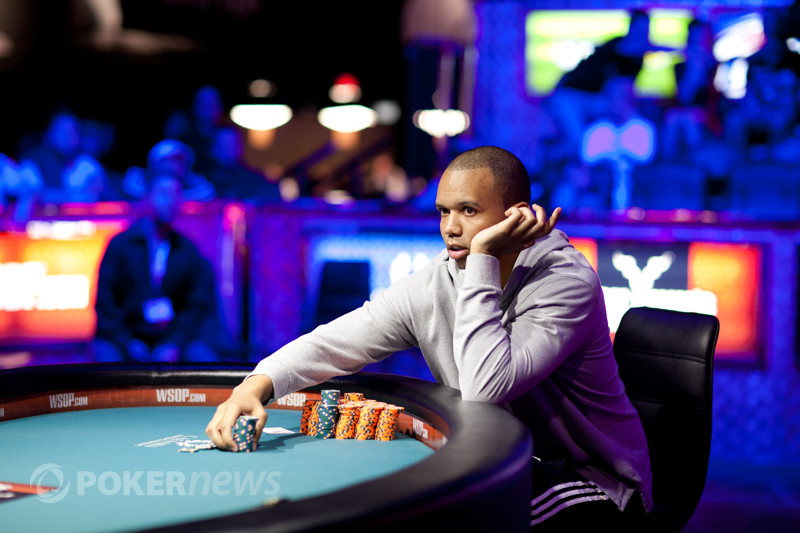 Phil Ivey raised to 240,000 and Andy Frankenberger called. The flop was

Ivey called on the button and Frankenberger checked. The flop was

, Frankenberger checked, Ivey checked and we moved to the turn. The dealer turned over the

, Frankenberger bet 125,000 and Ivey called. The fifth and final card was the

, Frankenberger bet 225,000 and Ivey called and it was a good call. He turned over

and scooped the pot.

Phil Ivey raised on the button and Andy Frankenberger folded.

Phil Ivey called on the button and Andy Frankenberger raised 'pot' to force Ivey out of the hand. 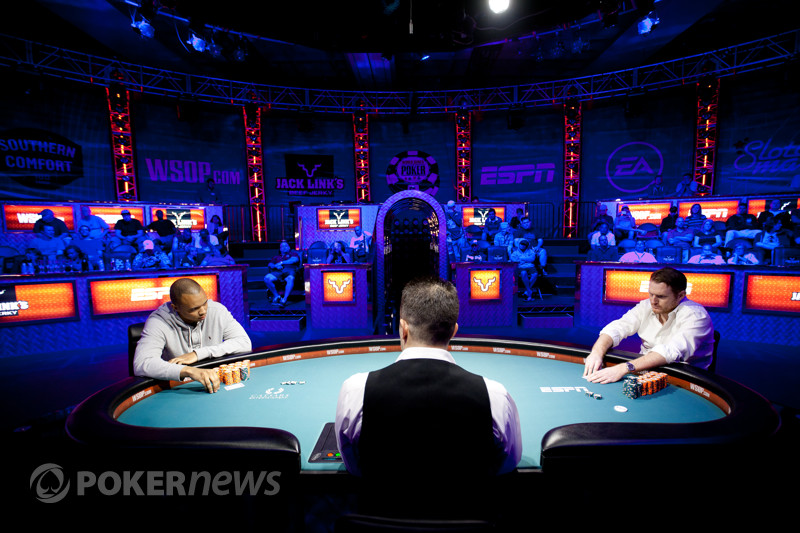 A Big Pot Goes The Way Of Frankenberger

Phil Ivey raised to 250,000 and Andy Frankenberger called. The flop was

and both players checked. The turn was the

and once again Frankenberger checked. Ivey decided he wanted to take a different course of action and he bet 240,000. Back to Frankenberger and he check-raised to 625,000. This was a crucial pot and both players knew it. Ivey stared down the table at his opponent, nodded his head slightly and made the call.

The arena was deathly silent. The dealer placed the

onto the deck and sat back waiting for the explosion, but it never materialised. Frankenberger just stared ahead of him, hands covering his cards, before checking his option. Back to Ivey, who was riffling some 5k chips, and he also checked. Frankenberger turned over

and it was enough to win a considerable pot.

The pair shared an unraised flop of

where Ivey check-called a 120,000 Frankenberger bet. That was the end of the action as the

were checked through and Ivey won the pot with

Another unraised flop; this time

Frankenberger raised to 240,000 and Ivey called. The flop was

Frankenberger raised to 250,000 and Ivey folded. 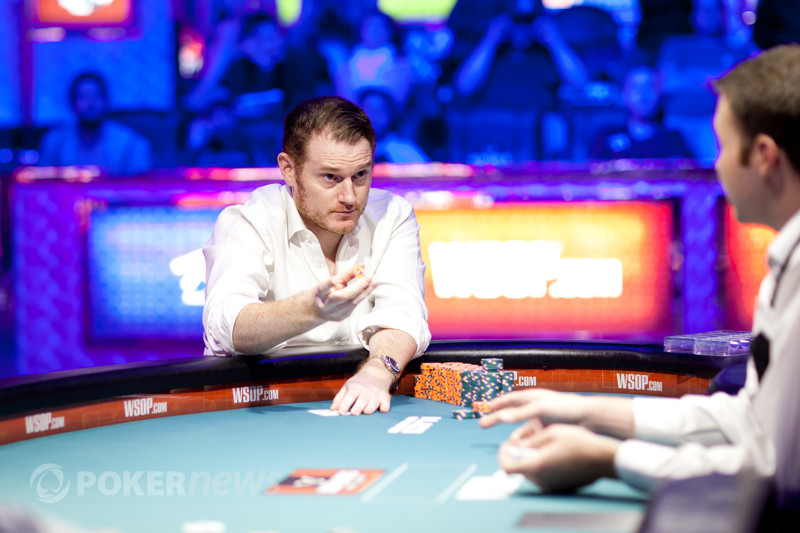 Phil Ivey raised to 240,000, Frankenberger bets pot and Ivey lays down his hand.

Ivey gets a walk

Phil Ivey raised to 240,000 and Frankenberger called. The pair shared the flop of