"Somebody get a writer over here to write this one down!" yelled out Ali Eslami from Table 360 before popping up out of his chair and looking around. PokerNews was right there as Eslami made the cry for a reporter. "Look at this crazy five-way pot," he said.

The action when our reporter arrived at the table was as follows.

From under the gun, Charles Pacheco limped in. Viktor Blom limped in from middle position and then Abe Mosseri limped in behind him in the hijack seat. Shaun Deeb then called on the button and John D'Agostino completed the bet from the small blind. Then, things got a bit interesting.

Nikolai Yakovenko was in the big blind and he raised to 12,400. Pacheco, Blom and Mosseri all made the call before action was back on Deeb. He took some time to think about his decision and then announced that he raised the pot.

Deeb actually had less than a full, pot-sized raise. His stack was a total of 68,800 and he was in for all of it. D'Agostino folded his hand from the small blind and then Yakovenko took some time of his own to think. After a minute or two, Yakovenko said, "All right, I'm all in."

While Deeb had less than the pot, Yakovenko had more and wasn't exactly all in just yet, but he slid a couple of giant stacks forward. Pacheco checked his cards again and made some facial movements. Blom quickly tossed his hand away, but had acted out of turn. A little bit longer passed and Pacheco then folded. With Blom already out of the way, Mosseri was up and had a very big decision in front of him.

Mosseri had a little under 400,000 in his stack and asked Yakovenko to count his stack. Yakovenko said to Mosseri that he actually had more than the pot, but Mosseri still wanted a count on Yakovenko's entire stack, using a few choice words. With all the chips Yakovenko had, it took him and the dealer a little bit to break down all the stacks. When it was finished, Yakovenko was said to have had 407,300. Now it was Mosseri's turn to tank.

Mosseri went into the tank, while Deeb stood up next to the table and watched. While Mosseri tanked for several minutes, a large crowd gathered around the table. It seemed as though every few seconds that passed, a new person showed up to watch what was going on. Everyone wanted to see what was going on and some were commenting on the action, which Yakovenko jumped in and asked people to stop doing. Deeb backed him up and silenced the spectators.

It was several long minutes in the tank for Mosseri. D'Agostino was pacing around behind the table telling people they weren't even going to get to play another hand because of how long this had been taking. D'Agostino was very short at the time and was looking to get some more hands in.

At one point when Mosseri was in the tank, he did some talking about his hand out loud, which Yakovenko wanted him to stop doing. Mosseri had announced his hand, saying, "I have aces and one suit," while plenty of other players were hovering around. Yakovenko took this as Mosseri "polling his friends" about his hand. There was also a point when Mosseri looked back at his cards and Greg Mueller leaned down to peak in from behind, which Yakovenko also requested be put to a stop.

Mosseri tanked for what most estimated at 10-15 minutes before Yakovenko finally called the clock on him. "Wow, this is the first time in my life anyone has called the clock on me," said Mosseri. Mosseri was given a minute to act on his hand by the floor staff and eventually said, "I call."

With all the cards turned up, the dealer quickly ran out the flop, turn and river with the

. Deeb had made a spade flush to more than triple up and win the main pot. For the side pot, Mosseri's aces held up and he was the winner of that one. But then, there was more controversy.

After the board ran out, Yakovenko said, "Wait a minute, he only said call," speaking of Mosseri's preflop action. Because Yakovenko had more than the pot when he raised, he wasn't actually all in. He stated that he only reraised the pot, which caused issue about whether or not everyone's money actually went in. It was clear that Deeb was all in, but the side pot between Mosseri and Yakovenko was in question due to Mosseri saying only, "I call."

The floor staff was called over again and the dealer informed him that the hands were prematurely tabled with action still pending between Mosseri and Yakovenko. It took another few minutes to get the story of the hand straight and figure out what was to happen. 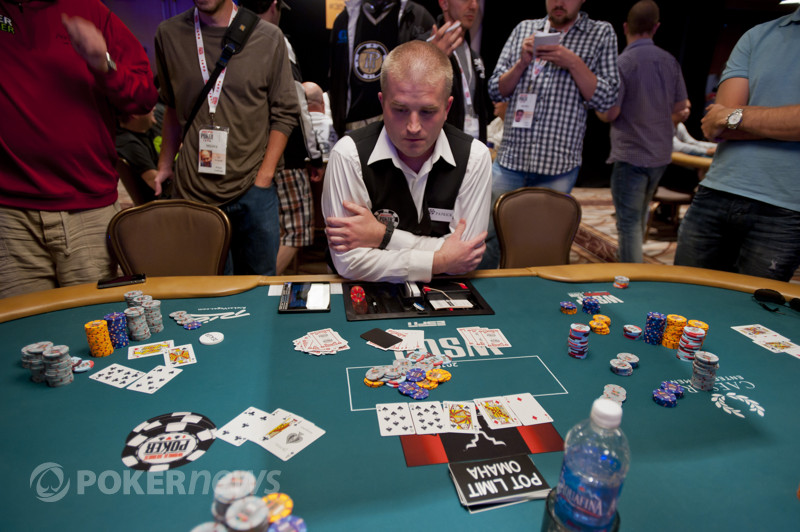 The pot was counted, which Eslami's iPad calculator was needed for, to determine that Yakovenko's reraise was to 246,000. With Mosseri's stack at around 150,000 more than that, the first floor ruled that the turn and river would have to be rerun as the flop action hadn't been complete. Deeb flung his arms up in the air and couldn't believe the ruling. Neither could anyone watching or the players at the adjacent tables who could hear things.

Shouts of, "That is the worst ruling of all time," and "I can't believe that's the rule," and "Are you joking?" rang out within the tournament area. Deeb spoke up and said he wasn't accepting the ruling and that he wanted the ruling of World Series of Poker Tournament Director Jack Effel.