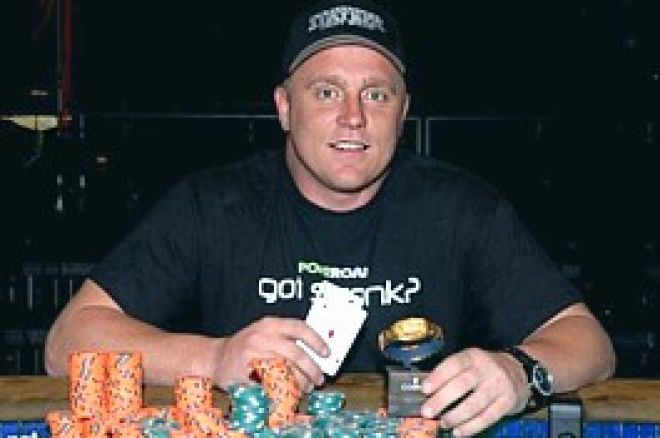 Poker players find inspiration in winning a tournament with thoughts of taking down a six-figure first prize or the thrill of winning a World Series of Poker bracelet. Brian Lemke's inspiration for winning included honoring his late cousin, PokerRoad Radio producer and former PokerNews employee Justin Shronk. That inspiration led Lemke to his first WSOP gold bracelet as he took down the victory in Event #15, $5,000 No-Limit Hold'em early Tuesday morning.

Day 3 saw the return of 17 players after Day 2 play was stopped at the 3am deadline. The first hour brought the eliminations of Nicholas Grippo (16th) and Tom Braband (17th), each player earning $27,029. Lars Bonding was the next player to hit the rail when Brian Lemke's pocket queens bested Bonding's A-10, with Lars earning $35,341. David Benefield started the day as the short stack before he doubled up off David Inselberg. Benefield went all in again against Inselberg with

; this time he was dominated by Inselberg's

. The flop was good for Benefield as it came down

on the turn reversed his fortunes, giving Inselberg a Broadway straight. The river was a meaningless

Matthias Neu was the next player to exit the tournament arena in 13th ($35,341), followed by Olivier Busquet in 12th ($47,501). David Inselberg's 11th-place finish ($47,501) consolidated the players to a ten-player almost-final table. Before the official final table – to be broadcast over the ESPN360 broadband service – would be reached, one more player needed to be eliminated. When the last table resumed, here's how the players were seated:

The “final” table started with few flops seen as the players tightened up and eventually the decision was made to move everyone to the ESPN feature table. Just a few hands later a big pot developed, resulting in two players being eliminated in the same hand. David “The Dragon” Pham moved all in, Isaac Baron followed suit and shoved for all his chips, and Christian Iacobellis called all in. Baron had both players covered and also had the best hand when all three hands were turned over:

for Iacobellis. The board brought no help to any of the players, leaving Isaac Baron to take down the pot and eliminate David Pham in tenth ($47,501) and Christian Iacobellis ninth ($66,403).

Brian Lemke would do most of the damage against the stack of Billy Kopp, all in with pocket queens against Kopp's A-Q suited. The board brought no help to Kopp, left with only 2,000 in chips. Kopp was able to double up several times to stay alive, but he eventually succumbed to Fabian Quoss; Kopp picked up $75,115 for his eighth-place finish. Lemke then crippled Isaac Baron when his A-Q dominated Baron's A-J, moving Lemke into the lead with over 2.5 million in chips. Fabian Quoss finished off Isaac Baron on the next hand, sending Baron to the cashier to pick up $88,783 for his seventh-place finish.

The next player to exit the featured table was Danny Illingworth, going all in with

. No eights hit the board, and Illingworth pocketed $109,872 for sixth place. As the players went on their one-hour dinner break, Fabian Quoss regained the chip lead from Brian Lemke.

Liya Gerasimova, girlfriend of 2008 WSOP Main Event runner-up Ivan Demidov, would be the next to miss out on a chance at a WSOP bracelet. She doubled up through Thomas Keller on the first hand after the dinner break. But then Mike Sowers doubled through her when his pocket eights flopped a set against Gerasimova's A-Q on an eight-high board, leaving her with just 180,000 in chips. Fabian Quoss picked up those chips on the next hand, as Liya Gerasimova finished in fifth place, good for $142,688. Sowers would then run into a set of eights himself, when he moved in preflop with Q-10 against Fabian Quoss' pocket eights. Another eight-high board left Sowers drawing slim, and a king sealed his fate, exiting in fourth place, earning $194,931 while Quoss had 6.4 million in chips to add to his chip lead.

Thomas Keller made a move when he shoved all in with

, but when Fabian Quoss woke up with

to make the insta-call, Keller was in bad shape. There wasn’t much help for Keller when the flop came down

, but Keller picked up a flush draw when the

came on the turn. The

on the river gave Quoss the straight, as Thomas Keller finished in third for $280,852. As heads-up play began, Quoss held a commanding chip lead of just over 3.5-to-1:

Lemke started heads-up action trying to chip away at Quoss, picking up a few pots. Quoss maintained control, but Brian doubled up to 3.5 million in chips when his A-6 topped Fabian's Q-10. After two hours of heads-up action, Lemke would finally take the chip lead when he doubled up again with

, turning a club flush against Quoss'

The final hand of the tournament saw Brian Lemke come from behind once more, as he moved all in preflop with A-8. Quoss made the call with the dominating A-Q. The flop came down J-10-9 to give both players an open-ended straight draw, with Quoss having the higher draw. The queen on the turn gave Lemke the lead, but Quoss could double up with any of the four remaining kings. The river brought no king, and Fabian Quoss earned $427,912 for his runner-up finish. Brian Lemke earned $692,658 and a prized WSOP gold bracelet in his first-ever career WSOP cash.

Lemke dedicated his win to his cousin Justin Shronk, who passed away in April at the age of 27. In an emotional interview following his win, Lemke said, “He was with me the whole time – the entire time. I know he brought that queen for me. I miss him and that bracelet is dedicated to him, my family, my grandma, and his mom.”