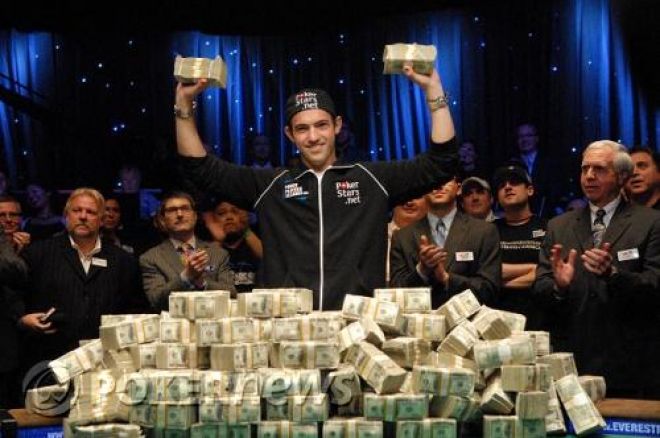 What many thought would be a relative cake walk for the young PokerStars sponsored Joe Cada, turned out to be quite a ride that ended with Cada being crowned the 2009 World Series of Poker Champion.

After a ceremony congratulating the other seven "November Nine" combatants, and a "Shuffle up and Deal" by Motley Crue front man Vince Neil, play got underway at around 10:30 p.m. PST. It only took one hand for the fireworks to start as a raising war broke out on a

fell on the turn, Cada checked over to Darvin Moon, who fired 10 million to the "oohs" and "ahhs" from the crowd. Cada called rather quickly and the

fell on the river prompting both players to check. Moon showed down pocket queens which were good against Cada's nines giving Moon a huge boost in chips.

Moon used the first hand of play as a catalyst, and began his march towards the chip lead. Cada seemed to be overmatched and slightly out of sorts playing against the hyper aggressive Darvin Moon. Each time Cada tried to play back at Moon, the logger from Maryland would fire right back, many times three-betting and four-betting his younger foe who many thought would be able to pick apart the less experienced Moon. At one point after a twenty minute break, Moon took control winning 14 of 21 hands dealt.

Cada knew he couldn't let Moon walk over him all night and finally made a stand. Cada, from the button, made it 3 million to go and Moon made the call. The flop came down

and both players checked. The

on the turn brought about another check from Moon, and Cada decided to test the waters with a bet of 3 million. Moon quickly announced he was all in, leaving Cada to make a decision for his World Series of Poker Main Event life. Cada took a sip of water as he patiently pondered the action. Finally, and quietly, Cada said, "I call," revealing

and would need a six or a jack to claim the title. After a painful delay for television, the

river was dealt and Cada regained the chip lead, with about 108 million in chips.

Cada extended that lead just a few hands later when his

rivered two pair on a

board. Moon mucked his hand upon seeing Cada had the winner, and was left with 74.7 million chips to Cada's 120.1 million.

Cada had clearly grabbed the momentum and was pushing forward looking for the knock out blow. On the 364th hand of the final table, only eight hands after he doubled up, Cada seized the title.

Cada, from the button, made it 3 million to go, and Moon decided to stack together some chips and three-bet to 8 million. Cada patiently re-checked his cards before deciding to move all-in. Moon, now facing a decision for his tournament life double-checked his own cards before making the call. When the cards were on their backs, ironically Cada flipped over the

, showing pocket nines for the second time, the first being the first hand of the heads-up play. Moon, however only had the

this time, not two queens, with his other card being the

It was absolute pandemonium inside the theater. The crowd began jumping up and down in the balcony, everyone screaming cards they hoped to see on the flop. With the eyes of the poker world staring directly at the table, the dealer burned a card and ran the flop:

A clean and safe flop for Cada, now two cards away from poker glory. Moon stood up behind his chair with a blank stare. Cada could not bare to watch, he was over in the stands, clutched in the arms of friend and backer Cliff "JohnnyBax" Josephy. The

was scary in appearance to Cada and supporters, but safe nonetheless.

Moon would need to catch a queen or a jack to prevent Joe Cada from wining every last chip in play. The drama was too great for words. With one card to come, and the drama coming to an absolute climax, the dealer slowly peeled off the river card:

A deafening roar echoed through the rafters as Joe Cada was swarmed by his friends and family in the crowd. Darvin Moon shook his head and paced slowly away from the table. Cada quickly came over to shake his hand, and the two men exchanged pleasantries before Moon's exit. After a truly legendary run for Moon, his Main Event was over.

We have a new champion ladies and gentleman and his name is Joe Cada.