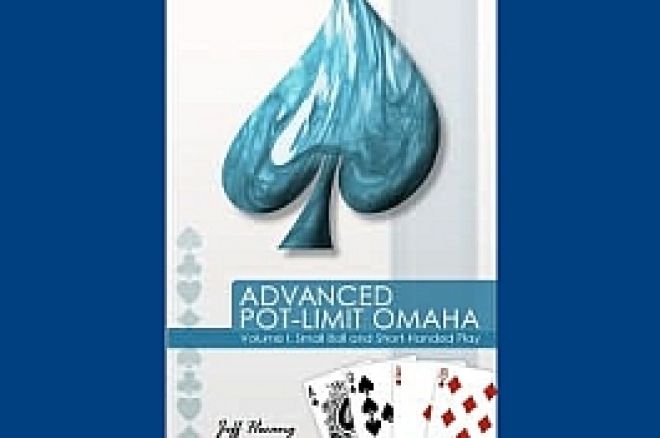 “What else could you possibly say about Omaha that you didn’t say in the first book?”

Such was the question Jeff Hwang says he was consistently asked when working on his newest book, Advanced Pot-Limit Omaha, Volume I: Small Ball and Short-Handed Play. Indeed, as Hwang himself points out, it wasn’t that long ago that even one book about pot-limit Omaha was considered by most publishers to be one too many.

Hwang notes that at the time his Pot-Limit Omaha Poker: The Big Play Strategy first appeared in December 2007, “no one — not even the biggest publisher of poker books in the business — thought that there was a market for PLO books.” Times have certainly changed, with PLO starting to be spread more frequently both in Vegas card rooms and elsewhere, and a sudden spate of Omaha-related texts hitting the shelves this summer and fall.

Among these new offerings, Hwang’s Advanced Pot-Limit Omaha, Volume I is a clear highlight. Hwang’s new book further establishes its author as a foremost authority on PLO strategy and theory, building significantly on his earlier book’s advice while providing numerous tips and strategies for succeeding in the game many observers are heralding as “the game of the future.”

In his first Omaha book — the first half of which concentrated on pot-limit Omaha (the rest concerned Omaha-8 and PLO-8) — Hwang presented his recommended “big play strategy,” a somewhat judicious approach to PLO that involved careful starting hand selection and an ability to recognize “big-pot situations” in which one should be desirous to play for stacks. Much of the point of Hwang’s earlier treatment of PLO was to explode the “fallacy that you have to be in a gambling situation when the money goes in.” Rather, a sound technical understanding of starting hand construction and how draws work — “straight draw physics” and “big-pot science,” says Hwang — as well as an appreciation for the importance of playing with position can help one consistently find those situations in which to exploit significant equity edges when playing big pots, and thus not always be “flipping” for stacks.

One need not have necessarily read Hwang’s earlier book in order to tackle Advanced Pot-Limit Omaha, although having some experience with PLO, as well as that fundamental grounding in the technical aspects of the game the first book provides, are most certainly useful prerequisites. Rather than repeat the earlier presentation of “big play strategy,” Hwang mostly assumes his reader’s understanding of that basic approach and thus without much ceremony moves directly into discussing the “advanced” plays the title of his new book advertises.

The new book’s somewhat intimidating 500-plus page length may well put off more casual readers — good news to the more serious students of PLO as they stand to benefit greatly from Hwang’s advice, further distancing themselves from the many hold’em players who jump into PLO games without much prior tutelage. Despite its length — and the occasionally complicated concepts being discussed — the book is not too taxing of a read thanks largely to Hwang’s communicative style as well as to the smart, sensible organization of the book.

Like a good teacher, Hwang does a terrific job explaining difficult material in clear, unambiguous terms, at times demonstrating both wit and candor as he carries the reader through various concepts and hand examples. The book’s logical organization also helps keep it from becoming overly arduous, and in fact, as Hwang himself points out, the ordering of the sections was by no means arbitrary but consciously plotted so as to help the reader get the most out of each subsequent discussion.

The book begins with a lengthy look at a particular advanced play, floating, that bluffing technique often employed in no-limit hold’em whereby one calls with a lesser hand on one street with an idea to try to take the pot away on a later street. While such a first step might seem an arbitrary starting point at first glance, floating is actually a terrific way for Hwang to build upon the basic “big play strategy” approach of his first book, immediately introducing to his reader a play which goes beyond hand values and pot odds.

From there, Hwang frontloads the book with sections covering other important concepts necessary to the strategic advice that follows. Hwang ably applies to PLO the idea of stack-to-pot ratio (SPR) introduced by Ed Miller, Matt Flynn, and Sunny Mehta in Professional No-Limit Hold’em, explaining why it is perhaps an even more meaningful consideration in pot-limit games. Other concepts including deep stack leverage, positional advantage, the “pivot” card, value betting, and bluffing are given attention, all setting the stage for Hwang’s presentation of “small ball” strategy, his discussion of three-betting before the flop, and his advice regarding short-handed play.

There is much here that should prove especially eye-opening to no-limit hold’em players who might mistakenly carry over certain preconceptions from their game to PLO. Just to touch on one example, Hwang explains how the idea of “pre-flop initiative” — crucial in NLHE — is much overrated in PLO, and in fact shows both through explanation and hand examples how raising before the flop in PLO not only often fails to create fold equity, but tends to persuade players to play back at the raiser after the flop. That is not to say Hwang discourages preflop raising in PLO, but rather makes an effort to clarify for his readers the reasons why one should be putting in those raises, with the idea of forcing people out with post-flop continuation bets (as in NLHE) not generally being high on one’s list of motives for raising before the flop.

Most sections of the book include multiple hand examples, the most extensive of which being the “128 Hand Walkthroughs” which further the discussion of short-handed play. The book concludes with a thoughtful consideration of bankroll requirements for PLO, views on “miscellaneous topics” such as game and seat selection, and some concluding thoughts about the evolution of PLO and its probable future.

As Hwang ably demonstrates in Advanced Pot-Limit Omaha, Volume I, there was quite a bit more to say about Omaha. In what looks to be a rapidly growing category of poker literature, Hwang’s book appears destined to be regarded as an important contribution to PLO strategy and theory.