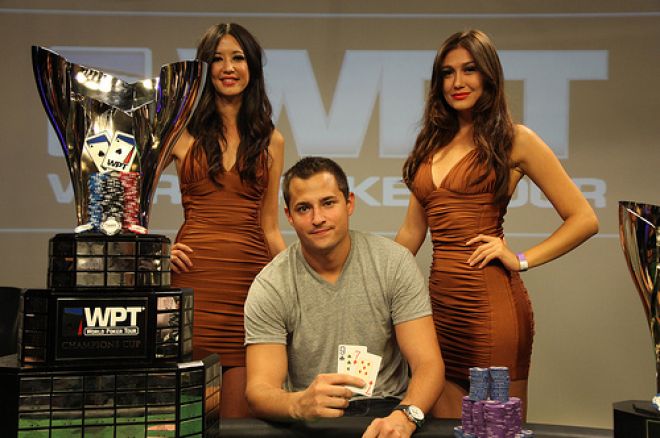 The 2011 World Poker Tour Malta was completed on Saturday and another WPT champion was crowned. Walking away with the title and a $273,200 first-place prize was 2011 World Series of Poker November Niner Matt Giannetti.

At the start of the day, Tristan Clemencon held the chip lead. Mats Karlson fell in eighth place and was followed out the door by Christofer Williamson in seventh to set the official WPT final table. With six players remaining, Ceclia Pescaglini was in pole position and Giannetti was in second. From there, it only took two hands to see the first player hit the rail.

and Sartoris hit the rail in sixth place.

Although Clemencon began the day as the chip leader, he fell in fifth place at the hands of Pescaglini. According to the WPT Live Update Team, Trumper raised to 65,000 with the blinds at 15,000/30,000 with a 5,000 ante. Clemencon called from the small blind and then Pescaglini reraised to 230,000 from the big blind. Trumper folded and Clemencon moved all-in. Pescaglini called and tabled the

Trumper was next to go in fourth place, on the 19th hand of the official final table. According to the World Poker Tour Live Updates Team, Pescaglini also sent him to the rail, hitting an ace with her

. The money went in preflop and the board ran out

Over 100 hands went by during three-handed play. Then, Filippo Bianchini fell in third place on the 122nd hand of play with the blinds at 50,000/100,000 with a 10,000 ante. Bianchini was all-in preflop for his last 300,000 and was called by both of his opponents, Giannetti and Pescaglini. The flop came down

and Giannetti bet 375,000. Pescaglini called to see the

land on the turn. Both players checked and the river completed the board with the

. Both checked again. Giannetti showed the

and Giannetti's two pair, sixes and fives, won the pot.

for top pair and Giannetti held the

for an open-ended straight draw. The