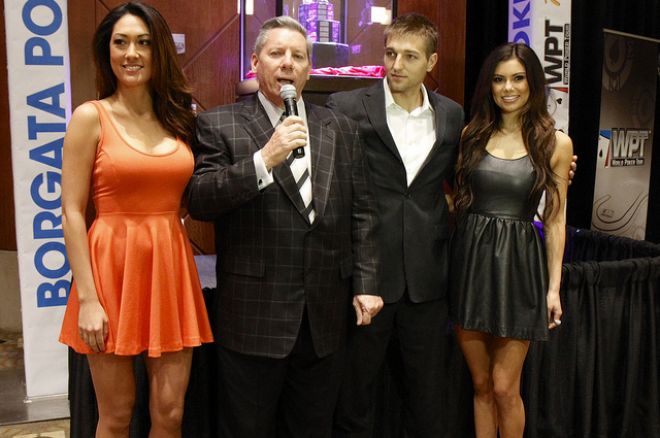 On Sunday, Jan. 27, 2013, the World Poker Tour Borgata Winter Poker Open kicked off with the first of two starting days at the Borgata Hotel Casino & Spa in Atlantic City, marking the first time since Season 6 the WPT had returned to the Borgata for the event. The tournament kicked off at 11:00 ET, and throughout the day, 397 entries were generated. After eight levels of play, that field had been reduced to approximately 200. Leading the way with 182,075 in chips is Luis Vazquez, who is joined at the top of the chip counts by the likes of Jason Koon, Matt Matros, Lee Childs and Mohsin Charania.

Here’s a look at the top 10 chips counts at the end of Day 1a (interestingly, Vazquez was awarded a $5,000 bonus for finishing as the chip leader while the second-biggest stack received $3,500. The same bonuses apply for Day 1b.):

Day 1a WPT Borgata Winter Poker Open, which allowed players to re-enter as many time as they’d like up to the start of Level 7, attracted some of poker’s premiere names. In fact, it seemed anyone who wasn’t in Australia for the 2013 Aussie Millions made their way to the East Coast for the latest WPT event, and it didn’t take long for some of them to mix it up.

For instance, in Level 2 with the blinds at 50/100, Darren Elias and Eric Baldwin squared off in a big pot. The WPT Live Reporting Team picked up the action on a

. Unfortunately for him, Baldwin held the

river was of no consequence, and Elias busted — though he immediately re-bought. Baldwin went on to bag up 95,000 while Elias survived his second bullet with 43,000.

, Dwyte Pilgrim moved all in. Ryan D’Angelo, who only had 16,000, hit the tank. Eventually, he emerged and made the call with the

for straight and flush draws, which he needed to hit in order to overcome the

of Pilgrim. The dealer burned and put out the

and up against the

of Tim Reilly. The

flop gave Chorny the lead, but it was short lived as the

turned to give Reilly a pair of kings. The

river was useless to Chorny, who was left with the decision whether or not to re-enter on Day 1b.

Likewise, Patterson was sent packing when he got his short stack all in preflop holding the

of Beth Shak. The board ran out a dry

, and Petterson joined Chorny on the rail.

Others who failed to make it through to Day 2 and may or may not re-enter on Day 1b are Allen Kessler, Erik Cajelais, Shawn Cunix, Jake Bazeley, Jonathan Little, John DiBella, Andy Philachack, Daniel Buzgon, Steve Dannenmann, Noah Schwartz and Matt Stout.

Day 1b is expected to be even bigger, and there’s a good chance last year’s field of 743 entries, which created a prize pool of $2,422,200, will be surpassed. It’ll take nearly a week of play to determine the next champion, but rest assured PokerNews will be bringing you recaps every day along the way.

*Other Borgata Winter Poker Open winners (when it was not a WPT event) include Steven Weinstein, Jeff Madsen, Vadim Shiez and the defending champ, Josh Mancuso.