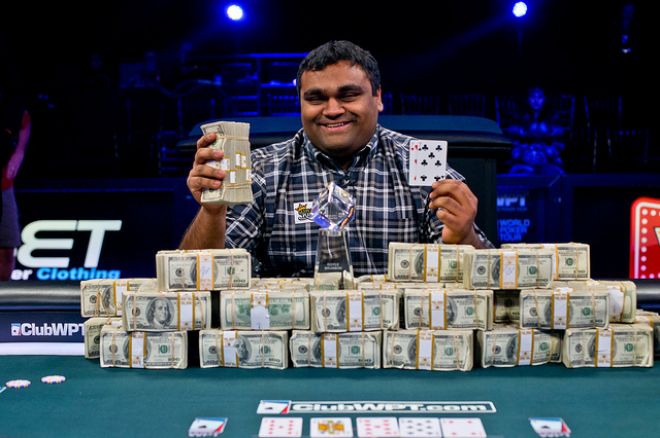 The 2012 World Poker Tour Five Diamond World Poker Classic wrapped up on Sunday, adding a new member to the long list of WPT champions. Emerging victorious and taking the massive $1,268,571 first-place prize was Ravi Raghavan. He defeated a stacked final table in one of the most prestigious events on tour to earn the largest score of his career.

At the start of the final table, all eyes were on chip leader Antonio Esfandiari. Coming into Day 6, Esfandiari's record in the WPT Five Diamond spoke for itself. He cashed in the event 2008 and 2009, won the event in 2010, and placed sixth last year. Simply put, he crushes at Bellagio, but would we see him win his third WPT title?

Esfandiari maintained his chip lead through the first several hands but then slipped behind Shawn Buchanan on Hand #28 of the final table. He lost a pot to Andrew Lichtenberger after folding on the river and dropped into second place on the leaderboard by a little more than 300,000 in chips. A couple of hands later, Esfandiari regained the chip lead.

, and Kottler was flipping for his tournament life with the

Nothing Kottler needed fell on the

board, and he was eliminated in sixth place for $187,845. Previously, Kottler's largest live tournament score was just over $70,000.

After Kottler's elimination, Esfandiari held his lead, but Raghavan began chipping up. Raghavan was right on Esfandiari's heels going into Hand 59, and that's when he took the chip lead for the first time. Then, on Hand 61, it was time for the second elimination of the day.

, but was eliminated as the board ran out

. For his finish, Lichtenberger earned $234,197 — the third largest live tournament score of his career.

Shortly thereafter, on Hand #72, Raghavan slipped back into second place with Esfandiari taking back the lead. Over the next several hands, the unthinkable happened, though, and Esfandiari became the fourth-place finisher. After Esfandiari kept his lead through Hand 75, the demise began when Winters doubled through him on Hand 76.

With the blinds still in Level 29, action folded to Winters in the small blind. He raised to 190,000, and Esfandiari made the call from the big blind to see the

flop. After a check from Winters, Esfandiari bet 210,000. Winters made the call, and the dealer placed the

and saw the bad news. The river completed the board with the

, and Winters doubled up. Despite dropping to under 3.8 million in chips after that hand, Esfandiari was still in second place.

On Hand 81, things exploded on the table when the stacks of Esfandiari and Raghavan went into the middle. Unfortunately for Esfandiari, he was in bad shape.

From the small blind, Esfandiari made it 200,000 to go. Raghavan reraised to 490,000 from the big blind, then Esfandiari moved all in for over 3.8 million. Raghavan snapped with the

, and all Esfandiari could mutter was "Damn," as he tabled the

, and Esfandiari was gone just like that. For his effort, Esfandiari took home $329,339.

With that massive pot, Raghavan moved over 9.24 million in chips, which was just about half of the chips in play. Buchanan was in second place with 3.165 million, and Winters was in third place with 2.695 million. Just two hands later, Buchanan sent Winters our the door.

, but was behind Buchanan's

board gave Buchanan the win and sent Winters packing. For his finish, Winters earned $483,031.

When heads-up play began, Raghavan had 9.33 million in chips to Buchanan's 5.77 million. The levels were shortened to 30 minutes, but that didn't mean things would end anytime soon. Raghavan kept one foot on the gas and the other on Buchanan's throat for much of the battle. After nearly 70 hands of heads-up dueling, Buchanan was eliminated short of his second WPT title.

. Raghavan woke up to the

in the big blind and made the call, having Buchanan dominated. After the flop came

, and the turn added the

to the board, Buchanan needed a king, a jack or an eight on the river to stay alive. He could also hit a ten to chop the pot. It literally wasn't in the cards, though, as the river completed the board with the

, and Raghavan had emerged victorious. Buchanan earned $746,502 for his runner-up result.

Prior to this win, the largest score of Raghavan's career came in 2010 when he took fifth place in the WPT Hollywood Poker Open for $105,234. This marks the first major title of Raghavan's young career, and he earned it on the most prestigious stage at Bellagio.

The next stop on the WPT will be in Atlantic City, New Jersey for the Borgata Winter Poker Open. The event takes place January 27 through February 1, 2013, and PokerNews will provide daily recaps of play.

Data and photo courtesy of WorldPokerTour.com.

Interested in getting in on the action? Check out our PartyPoker review page today and take advantage!