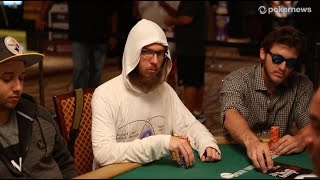 Andrew Lichtenberger is a professional poker player currently living in Las Vegas, Nevada. He is best known for winning the WSOP Circuit event in Caesars Palace, Las Vegas in April, 2010. Lichtenberger has also made five World Series of Poker final tables, however, none of them brought Andrew the most desired poker trophy, the WSOP bracelet.

Lichtenberger was born in 1987 in East Northport, New York. He started playing poker online on PartyPoker when he turned 18. However, it took some time for Lichtenberger to reveal his true talents. After playing cash games for awhile Andrew switched to MTTs and emerged as a highly successful tournament player. He stepped into the live tournament arena in 2007 and two years later Lichtenberger already had five WSOP cashes to his name including one runner-up finish.

Lichtenberger first appeared at the WSOP tables in 2009 and immediately made a name for himself scoring five money finishes. He first cashed in the $2,500 No Limit Hold'em event collecting over $14,000 for a 25th place finish. However, his biggest score that summer was second place in the $5,000 No-Limit Hold'em / Shootout tournament. Lichtenberger lost the battle for his first WSOP bracelet to Hungary's Peter Traply, but nevertheless took home a decent cash prize of $215,000. He also collected his biggest WSOP money finish that year. Lichtenberger placed 18th in the 2009 WSOP Main Event taking home more than half a million dollars.

The years 2010 and 2011 were not as successful as Lichtenberger only scored one and two cashes respectively for only $18,000 in two-year total. However, it all changed in 2012 when Andrew collected nine money finishes – more than in all the previous years combined. His best result was the third place finish in the $1,500 No-Limit 2-7 Draw Lowball event for more than $40,000. Lichtenberger also did good in the WSOP Europe that year coming in 5th place in the €1,500 Pot-Limit Omaha / Six Handed event for €18,000.

Lichtenberger has a total of four World Poker Tour cashes on his record. His first one came in 2009 when he finished 13th in the Five Star World Poker Classic $25,000 Championship event for more than $80,000. Then in 2010 he added another WPT cash to his resume by final tabling the Doyle Brunson Five Diamond World Poker Classic $10,000 Championship event for almost $70,000 in prize money. A year later Andrew made the final table in that same event once again, only this time he did even better and finished in 4th place taking home more than $200,000. Then in 2012 Lichtenberger placed 23rd in the WPT Rendez-Vous à Paris €7,500 Main Event collecting €15,065 in cash.

Apart from the three major poker circuits, Lichtenberger has a few more big finishes on his record. In April, 2010 he topped the WSOP Circuit's $5,000 Main Event at the Caesars Palace in Las Vegas. Lichtenberger took home the winner's ring along with a cash prize of $190,137. Then in December, 2011 he place second in the Epic Poker League - Event 3 $20,000 Mix-Max League Main Event. Lichtenberger lost the final battle to Chris Klodnicki and went home with $514,480 in his wallet.

Lichtenberger used to be the Full Tilt Poker's Red Pro.