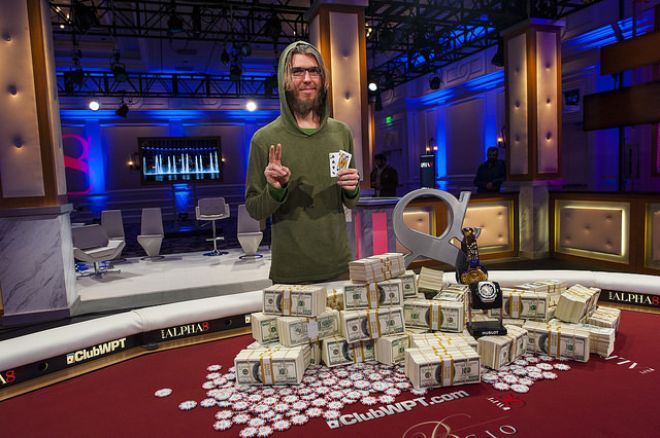 The Bellagio in Las Vegas was a busy place on Saturday as two premiere poker events were playing down to winners. The first was the World Poker Tour Five Diamond World Poker Classic — which you can read about here — and the other was the WPT Alpha8 Las Vegas, a $100,000 buy-in tournament that attracted 55 entrants and created a prize pool of $5,395,500.

It was the largest WPT Alpha8 in history, and after three days of intense play it was respected poker pro Andrew "Lucky Chewy" Lichtenberger who emerged victorious to capture the $2,104,245 first-place prize.

According to live updates from the event, the tournament attracted a plethora of poker pros. Among those to compete, and ultimately fall short of the money, were Daniel Colman, Dan Smith, Erik Seidel, Antonio Esfandiari, Scott Seiver, JC Tran, and Jason Mercier, who was looking for back-to-back titles after winning in St. Kitts. Unfortunately for Mercier he fell as the final table bubble boy.

Eight players returned to action on the third and final day of play, but with only six spots being paid, two players would leave empty handed. The first to go was Phil “Unabomber” Laak, who fell on Hand #24 when his

failed to hold up against Brian Rast’s

after a jack spiked on the river. Three hands later, the money bubble would burst when Brandon Steven shoved all in for 755,000 form middle position and Rast called from the cutoff.

. The elimination of Steven ensured the remaining six players a $323,730 payday, while two of them were slated to become millionaires.

It’d take two more levels for the next player to fall, but it happened on Hand #83 when Jason Les shoved all in from the button for 1.06 million and Rast three-bet all in over the top from the small blind. Tom Marchese folded from the big and Rast tabled the

, which was ahead of Les’

flop paired Les, but he needed more help to stay alive. However, the

turn took away any chance of that happening as Rast spiked a set to leave Les drawing dead. The meaningless

was put out on the river for good measure, and Les made his way to the payout desk in fifth place to collect $431,640.

and Lichtenberger, who had opened for 225,000, called with the

On Hand #201, a short-stacked Rast moved all in for 1.15 million from the button and Lichtenberger called from the big blind.

flop gave Rast a gutshot straight draw, but he was left wanting as the

appeared on the turn followed by the

on the river. Rast, who began the day as chip leader, had to settle for third place and $755,370 in prize money.

Lichtenberger began heads-up play with a slight chip lead over Marchese, though they would change positions several times before things came to a head. In what would be the last hand of the tournament, which happened on Hand #246 of the final table in Level 24 (60,000/120,000/15,000), Marchese opened for 300,000 and Lichtenberger three-bet to 900,000. Marchese opted to four-bet to 1.9 million and then called off when Lichtenberger moved all in.

It was a flip, and while the

flop didn’t pair Lichtenberger, it did give him a flush draw. The

turn completed it, which meant Marchese needed to boat up to stay alive. The dealer burned one last time and put out the

on the river. Marchese missed and collected $1,240,965 for his runner-up finish while Lichtenberger became the champion and notched his a career high $2,104,245.

The next WPT Alpha8 will take place in Florida at the Seminole Hard Rock Hotel and Casino from Jan. 17-18, 2015. Of course PokerNews will bring you a recap of all the action. For more information, visit worldpokertour.com.

*Pictures courtesy of the WPT.