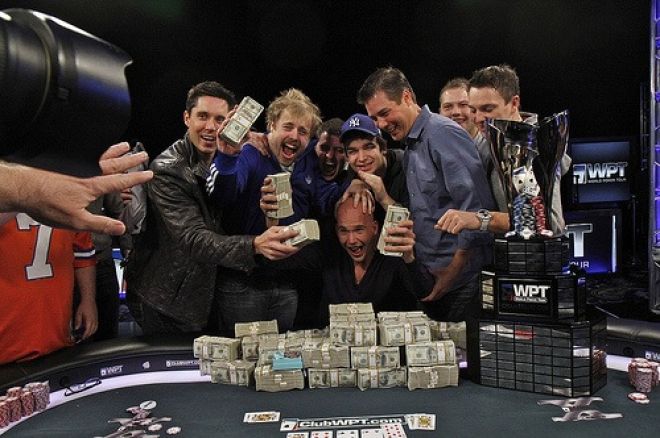 The 2011 World Poker Tour Doyle Brunson Five Diamond World Poker Classic concluded on Sunday at the Bellagio in Las Vegas, and followed tradition as an established pro emerged victorious over a stacked final table. At the start of the day, all eyes were on last year's champion, Antonio Esfandiari, who was looking to make WPT history with back-to-back titles. James Dempsey had other plans, however, and not only eliminated the former champ but assumed the title of Five Diamond champion, as well.

Here's a look at how things stacked up at the start of the final table:

Final-table action began with blinds at 30,000/60,000 with a 5,000 ante, and it didn’t take long for the first elimination. According to the WPT Live Reporting Team, it happened on Hand No. 10 when action folded to Dempsey on the button and he slid out 2 million — more than enough to commit both blinds if they chose to call. Short-stacked Vitor Coelho folded from the small blind, but Esfandiari made the call from the big.

spiked on the turn, putting a dagger in that dream. When the

blanked on the river, last year’s champ was eliminated in sixth place with $119,418.

Two hands later, Soi Nguyen raised under the gun to 120,000 only to have Coelho move all-in for 255,000. Vanessa Selbst called from the big blind, Nguyen put in the additional 135,000, and the two active players checked it down as the board ran out

; however, both were defeated by the

On Hand No. 32, Selbst managed to double through Andrew Lichtenberger, followed by the latter’s elimination three hands later. It happened when Nguyen raised to 160,000 on the button, Dempsey three-bet to 450,000 from the small blind, and Lichtenberger move all-in from the big blind for about 2.8 million. Nguyen ended up making the call and Dempsey got out of the way.

It was the worst of spots for Lichtenberger, who failed to improve as the board ran out an uneventful

. Lichtenberger, who took eighth in the same event last year, took home $218,933 for his fourth-place finish.

Not long after, on Hand No. 41, Selbst raised to 160,000 from the button and was three-bet to 450,000 by Dempsey in the big blind. Selbst, ever the aggressor, decided to move all-in for 2.8 million and Dempsey called, much to Selbst’s dismay.

flop was no help to Selbst, while the

on the turn left her drawing dead. The meaningless

was put out on the river, and Selbst was sent to the payout desk in third place to collect $338,351.

The final table had been moving rapidly up to that point, but it seemed things might slow down as heads-up play began with even stacks: Dempsey’s 8,320,000 to Nguyen’s 8,225,000. Over the course of the next 23 hands, Nguyen pulled out to a 2-1 chip lead, extending that to 4-1 by Hand No. 82. Things seemed bleak for Dempsey, but he managed to double on Hand No. 103 when he got all-in preflop for his last 3 million with

and was up against the inferior

Unfortunately for Nguyen, the Brit had seized momentum and used it to double yet again. On Hand No. 121, Nguyen min-raised to 300,000, Dempsey three-bet to 850,000, and Nguyen made the call, leading to the

flop. Dempsey led out for 1 million, Nguyen called, and the dealer burned and turned the

. Dempsey thought for a moment before moving all-in for his last 4.6 million, and Nguyen thought for about three minutes before making the call.

Dempsey was ahead with his ace-high and jack kicker, though he needed to dodge Nguyen’s plethora of outs. “Stay!” Dempsey commanded as the

appeared on the river. With that, the Brit jumped out to a 4-1 chip lead.

Clearly things had turned in Dempsey’s favor, and he closed things out five hands later. On hand No. 126, Dempsey raised to 300,000, Nguyen moved all-in for 3.6 million, and Dempsey made the call.

Nguyen was at risk and behind, but the

flop paired his jack and gave him the lead. The

turn was of no consequence, but the

hit the river to give Dempsey a king-high straight and the win. Nguyen was eliminated in second place for $517,478 while Dempsey took down the $821,612 first-place prize and added a WPT title to go along with his 2010 World Series of Poker bracelet.