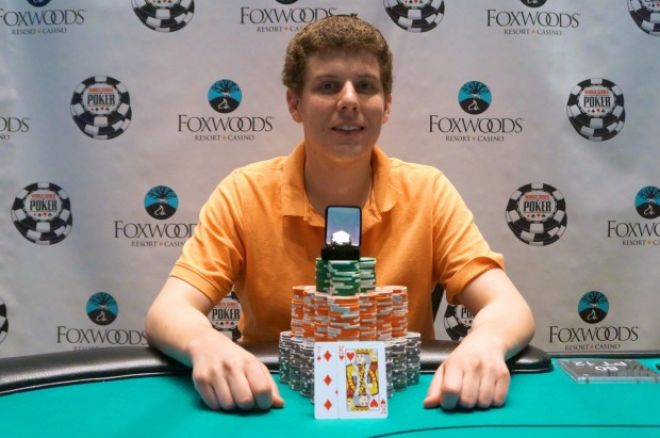 The 2013/2014 World Series of Poker Circuit season kicked off at Foxwoods Casino last week, and already a big story has emerged. Ari Engel won his sixth gold ring in Event #9 $580 No-Limit Hold’em after topping a field of 235 players, including up-and-coming star Aaron Massey heads up, to win the $29,634 first-place prize.

Engel and Massey began the final table second and third in chips respectively, while Chris Rizzo, who was runner-up in Event #4 $365 No-Limit Hold’em just a few days earlier, held the chip lead. Rizzo was looking to overtake Ryan Methia in the Foxwoods Casino Championship race, but despite his big chip stack, he was unable to do so as he exited in fifth place for $7,408. Not long after, Massey was heads up against his friend Engel, albeit at a slight chip disadvantage.

The heads-up match last nearly an hour. Engel, who notched 14 cashes and won two rings on the circuit last season to finish atop the National Championship leader board, slowly chipped away at Massey’s stack during the match. Eventually he was able to seal the deal to capture his sixth gold ring while denying Massey of his third – though he gave him his third WSOP Circuit runner-up finish.

I got 2nd. Congrats @realAriEngel on another ring. Good game.

“Aaron is an incredible player and I have an incredible amount of respect for his game," said Engel, who is now tied with Alex Masek at six WSOP-C rings. "Also, I want to thank my parents for their continued support.”

“I won two events last year and this is a great start,” Engel said of catching seven-time ring winner Chris Reslock. “I definitely think I have a shot.”