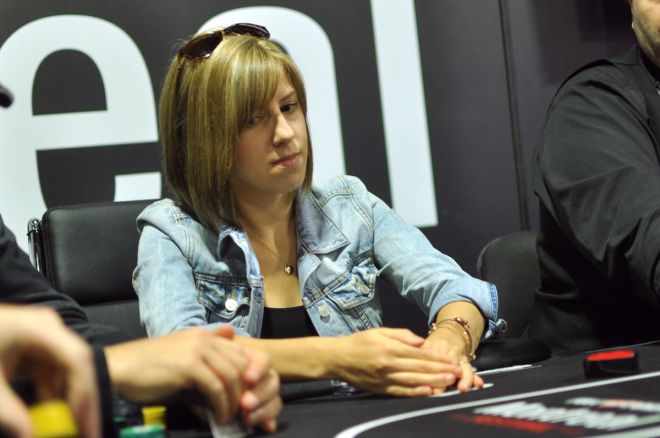 Day 1c of the Full Tilt Poker Montreal Main Event is under way on Sunday, and there’s already a packed house of 512 entrants in the Playground Poker Club. Among them are a host of female players – seemingly much more than the first two flights, although Full Tilt Ambassador Sin Melin finished Day 1b seventh in chips with 249,800 – and they are highlighted by 2013 World Series of Poker Ladies Event champion Kristen Bicknell, reality star Trishelle Cannatella, and Montreal’s Laurence Grondin.

Bicknell earned $173,922 for defeating Leanne Haas heads up in the WSOP Ladies Event, earning her first career bracelet. The Canadian, known as “krissyb24” on PokerStars, has reached Supernova Elite status the past three years, and she tends to focus on her grind to 1 million VIP Player Points (VPPs) at the $1/$2 and $2/$4 cash tables. Bicknell plays up to 24 tables at a time.

“I’ve never looked at poker as a career,” Bicknell told PokerNews in August after winning her bracelet. “But hope to always have it in my life as a hobby. I have made smart decisions with the money I have won from poker, and I’m just living it day by day.”

Bicknell, who has over $200,000 in career earnings, suggests that if anyone plans to attempt a run a SNE, that they stay ahead of pace. Also, while she doesn’t necessarily look at poker as a career, she would be interested in representing an online company.

“If the right opportunity came along as far as sponsor ship, I would be interested. As a happy PokerStars customer, I’d be proud to represent them.”

While Cannatella represents the Playground Poker club, she doesn’t look at poker as a career either, rather reality television has dominated the last decade or so of her life. Cannatella first appeared on The Real World: Las Vegas in 2002, then returned to do the Real World/Road Rules Challenge: The Gauntlet and The Challenge: Battle of the Seasons, and Rivals II.

During her final season in television, Cannatella quit due to unknown circumstances. Afterwards she tweeted, “I could not speak about production or the real reason I left.”

Cannatella, who has also posed for Playboy, played in Lingerie Bowl III, and dates Sam Chartier, who finished Day 1b with 230,100 chips, has just over $32,000 in earnings according to the Hendon Mob database.

Like Cannatella, Grondin is dating a professional poker player, November Niner Marc McLaughlin. Earlier in September, she tweeted that she’s ready to rail him to victory, adding the following picture of her planned outfit for her boyfriend of Irish descent:

PokerNews will keep an eye on all three of the ladies and the rest of the field as Day 1c rolls along.