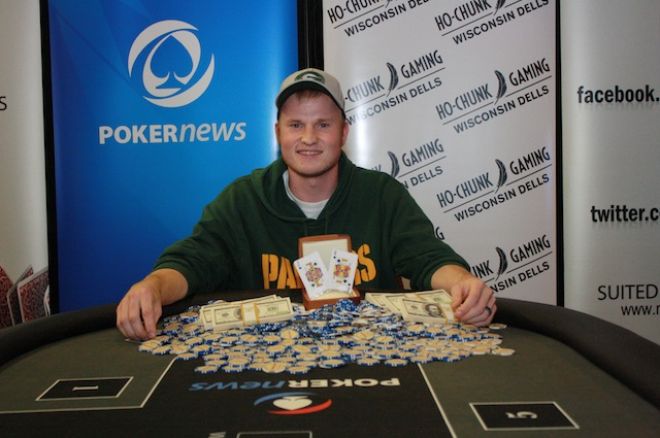 The PokerNews Mid-States Poker Tour Ho-Chunk Gaming in Wisconsin Dells, Wisconsin attracted a field of 305 entries and created a prize pool of $305,000 — the largest in state history. The final table was arguably the most accomplished of Season 4 that included PokerNews Senior Editor and World Series of Poker bracelet winner Chad Holloway and MSPT Player of the Year contender Brett Kuznia. However, it would be 22-year old Josh Reichard of Janesville, Wisconsin who would walk away with the $78,003 first-place prize and the RF Moeller diamond championship bracelet.

Reichard survived the Day 1b starting flight in the middle of the pack after bagging 85,900 in chips, but he accumulated a large stack throughout Day 2 to begin the final table as the chip leader with 1.081 million, more than 300,000 more than his next closest opponent.

Jason Seitz, a poker dealer from Shakopee, Minnesota, reached his third MSPT final table and earned a sixth MSPT cash — tying him for third all time. Seitz also won an MSPT event in 2011 for over $56,000. Unfortunately, Seitz would miss out on a second title as he was the first to fall. He earned $7,359 for his ninth-place finish, bringing his total MSPT earnings to $78,516.

After Brian Smith fell in eighth place for $8,823, Kuznia and John “JohnnyGstaks” Hayes were eliminated on the same hand when Reichard woke up with aces in the big blind after both had shoved all in before him. Neither Kuznia nor Hayes would receive any help, and were eliminated in seventh and sixth place, respectively.

Kuznia has been on a roll this season with his latest score marking his fifth consecutive MSPT cash and sixth MSPT cash lifetime, tying him for third all time. This was also Kuznia’s fourth MSPT final table tying him for second all-time behind only Everett Carlton.

With five players remaining, Holloway moved all in over the top of a raise by Rob WazWaz. A call was made and Holloway’s

was in great shape against the

of WazWaz. Unfortunately for the PokerNews Senior Editor, WazWaz found a ten on the flop. Holloway, who was playing at his home casino, earned $14,718 for his fifth-place finish.

Busted in 5th place for $14K or so. My AK<A10 AIPF. Disappointed but what can you do. Very pleased with my play throughout. #FB @msptpoker

WazWaz was at his third MSPT final table, though in his prior two appearances he had failed to get further than 10th place. WazWaz arrived at the final table as the short stack and was soon at risk of being eliminated in 10th place again as the first player to be all in. This time, though, he was able to double up to make a run before eventually being eliminated in fourth place by Miroslav Semanisin. The two players got it in preflop with WazWaz holding

Despite Semanisin amassing a healthy stack after eliminating WazWaz, it wouldn’t take long for Reichard to relive him of them. Just a couple hands later, Reichard raised preflop with the

and Semanisin called with the

. The flop came down

turned, and Reichard fired another bullet. Semanisin called with second pair and then the

spiked on the river to put Reichard back out front with two-pair. Reichard jammed the rest of his considerable stack and Semanisin tanked before making the call. With that pot, Reichard held nearly all the chips in play and Semanisin was left with a single big blind. He was eliminated in third place in the very next hand.

With a commanding chip lead, Reichard continued to put Mark Borns all in during heads-up play. Borns, an attorney from Madison, Wisconsin, ended up calling off with the

after Reichard open-shoved with the

. The board ran out a dry

The win marked Reichard’s second MSPT cash — he placed 15th in the very first stop at Ho-Chunk in September of 2012. His largest career score prior to Sunday’s win was $31,565.

The next MSPT event will take place in early December at Canterbury Park in Shakopee, Minnesota. For more information on that event, visit msptpoker.com.