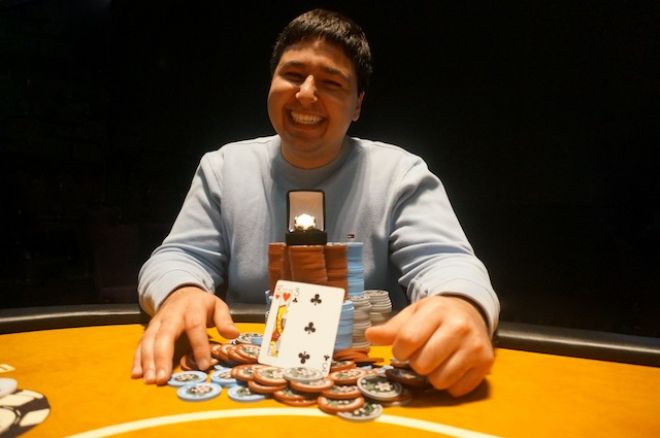 The popular tournament stop attracted 577 entries and created a prize pool of $865,500. After three days of play, 23-year-old Jonathan Gaviao walked away with the $181,757 first-place prize and a seat into the 2014 National Championship.

According to the WSOP Live Blog, the nine-handed final table began with 45 minutes left on Day 2, and three players managed to hit the rail in that time. In Level 25 (12,000/24,000/4,000), Timothy Tracy and Bryan McMullin were eliminated in ninth and eighth place, respectively, and then Cord Garcia followed them out the door in seventh.

Garcia, who has been featured in PokerNews' Circuit Grinders, was the headliner at the final table, which marked his third WSOP Circuit Main Event final table appearance. Garcia’s demise came when Brad Lipsey opened for 50,000 from the cutoff and Garcia moved all in for 632,000 from the button. The blinds folded, Lipsey called, and the cards were turned up.

According to the PokerNews Odds Calculator, Garcia’s live cards gave him a 39.97% chance of surviving the hand while Lipsey would score the elimination 59.54% of the time. The

flop paired Garcia’s king, but it also gave Lipsey trips and made him a 9-1 favorite. The

turn meant Garcia needed a king on the river — something that would happen just 4.55% of the time — but it was not meant to be as the

blanked. With that, Garcia was dispatched in seventh place for $27,073.

Finished 7th for 27k. Good paycheck but it's always bitter sweet not closing out. My big payday will come. Gl @GaviaoJ @cartermyers22

and White was sent to the rail in fifth place for $45,897, which was his first-ever WSOP Circuit cash.

After Lipsey and Charles Hopkins were eliminated in fourth and third place, respectively, Gaviao, who held a slight chip lead, was left to play heads up against Carter Myers. Surprisingly, it didn’t take long for Gaviao to seal the deal.

for two pair, and it was ahead as Myers was drawing to a flush with his

. The river was actually a club to give Myers the flush, but it happened to be the

“It’s wonderful,” Gaviao said after the win. “It’s always nice to win a ring and make a little bit of money. I couldn’t ask for anything more.”

He went on to add: “I’m just going to be thankful. Getting to look back and know that God’s good. Win or lose, he’s always good... You can take away all the money, and I’ll still have everything I need.”

It’s also worth noting that Aaron Frei won the Harrah’s Tunica Casino Championship after notching second-, fourth-, 11th- and 28th-place finishes. He earned a seat into the National Championship for his performance.

The 2013/2014 WSOP Circuit continues at Palm Beach Kennel Club from Feb. 5-17. Of course, you will be able to find a recap from that Main Event upon its completion right here on PokerNews.com

*Photos courtesy of the WSOP.