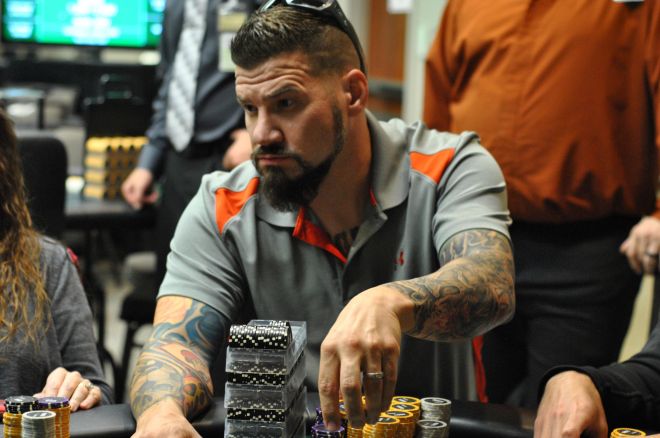 It was a roller coaster Day 1b for Brian Oberst in the 2014 Mid-States Poker Tour Tropicana Evansville Main Event, but he ended up in the spot every runner hopes for: leading the chip counts with 295,500. He topped a field of 120 players, with 17 advancing to Sunday's Day 2 where they will join the 26 survivors of Day 1a.

Pupillo would have taken the overall chip lead heading into Day 2 had things gone differently on the final hand of the night. He flatted a middle-position open with the

and then called a shove from Mitchell on the button, who had the

Oberst scuffled early, punting off his first bullet and grabbing a new seat. At that point, he began steadily climbing up the counts, until a monster late rush vaulted him to a peak of about 450,000. In the first massive pot, Oberst checked a

flop, and his lone opponent checked behind. On the

finished out the board, and Oberst shoved all in. His opponent made the call for about 50,000, and Oberst turned over

for a set of kings. His unlucky foe revealed

for a turned set of tens.

Oberst's surge continued on the penultimate level of the night, when Oberst and two short stacks were all in preflop, and Oberst held

, and Oberst spiked his set on the river to bust both players and hit his peak chip count.

However, Oberst lost some chips over the course of the last level, including paying off a big bet from Yen, whom Oberst described as his "nemesis." Oberst will slightly trail Day 1a leader Michael Hahn's 299,000 when Day 2 begins.

Among the players who won't be back for Day 2 are Jeff Grimes, Dan Chambers, Jacob Bazeley, Henry Tran, Matt Lushin, and Brad Rhodes. Bazeley was among the headliners on Day 1b, but the well-known tournament grinder never really got much going. He grinded a short stack for much of the day, shoving or folding for awhile after registration ended before ultimately bowing out just before the final break.

Day 2 will begin at 10:30 a.m. on Sunday, so be sure to come back to PokerNews for more live coverage from the MSPT Tropicana Evansville and to find out which of final 43 players will claim an MSPT championship.