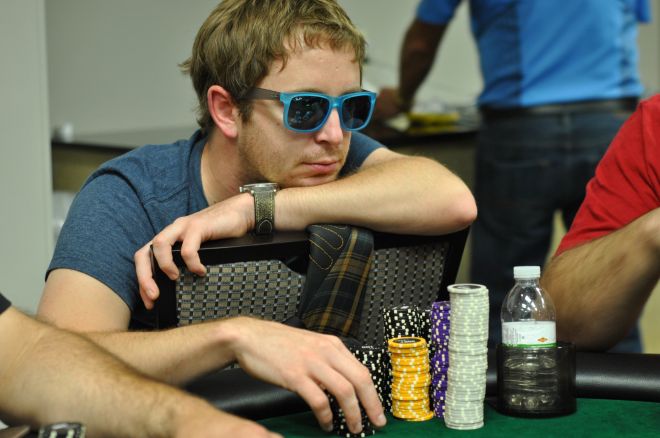 Michael Hahn emerged as the clear leader at the end of Day 1a of the Mid-States Poker Tour Tropicana Evansville, as his 299,000 is more than double that of second-place finisher Jim Will, who finished with 126,000. Hahn, who hails from nearby Carmel, Indiana, is an experienced player with more than $384,000 in live cashes.

A total of 105 runners took a shot in the first starting flight.

Brown spent much of the day as the chip leader before sliding late, and some of his losses coming at the hands of Hahn. In one pot, Hahn took some chips from his fellow top stack when Brown bet into a trio of opponents on a board of

. Joe Leisure called from the cutoff, as did Hahn on the button. The river card was the

, and Brown bet 12,000. Leisure folded, and Hahn silently dropped 33,800 into the middle. Brown couldn't call and slid the dealer his cards after about 30 seconds. Hahn just seemed to steadily climb in similar pots without showing down, as he was in the top five counts for much of the day.

Vang currently leads the MSPT Player of the Year standings, and it looked like he was going to roll to a big day after he got off to a nice start. On one hand, he opened for a raise in middle position and saw an opponent make it 1,050 to go. The big blind cold-called, and Vang elected to call to see the

flop. Everyone checked, and the

arrived on the turn. The big blind checked, and Vang fired out 1,425. The preflop aggressor pushed his stack of 6,000 or so into the middle, and the big blind folded.

on the board for a flopped full house. His opponent was dead with the

Despite the fast start, opponents put Vang in some tough spots late, coming at him with aggressive three-barrels and putting the squeeze on his continuation-bets. He also lost a late race when John McMillan caught a pair of kings on the river with

Friedman, a World Series of Poker bracelet winner, has the shortest stack of the bunch, but he still seems pleased as he joked late in the night that he was saving himself $2,200 in Day 1b buy-ins if he advanced from Day 1a.

Some players will have no choice but to pony up the one or two buy-ins on Saturday if they want another chance for glory. Those falling today included Charlie Dawson, Aaron Gamino, Jeff Grimes, and Nicholas Pupillo, who made a deep run in the WSOP's Monster Stack tournament this summer and cashed for nearly $100,000 in 12th place.

Day 1b begins Saturday at 4 p.m. local time, so be sure to come back to PokerNews for more live coverage from the MSPT Tropicana Evansville.